WINSTON-SALEM, N.C. — The body of a 1-year-old boy was found Friday afternoon, bringing the death toll to five from floodwaters that swept through the Hiddenite Family Campground in Alexander County. The South Yadkin River surged over its banks and through the campsite Thursday, an official said.

According to Doug Gillespie, county director of public services, the floodwaters either covered or swept away the recreational vehicles at the campground, which is home for many of the people caught in the flood.

The water rose in the predawn darkness. More than 30 people fled and made it safely to high ground, but four plus the baby did not escape. 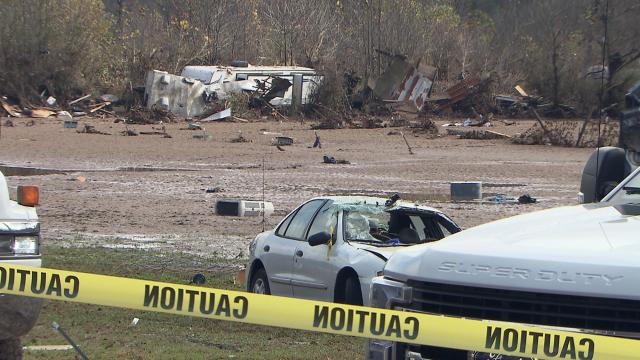 In the usually peaceful valley, recreational vehicles were toppled and rolled.

Just downstream from the campground, the river blasted out a chunk of a bridge on Cheatham Ford Road.

"It's unbelievable. It's devastating. My heart goes out to everybody there," said Lisa McHargue.

She used to live at the Hiddenite campground and knew those who were lost. She said two were a teenager and his mom.

Rescue teams from the Charlotte Fire Department came to search on foot and in the water.

Just before noon, they found a missing man in brush along the river, a short ways downstream from the campground. It was 4 p.m. until the body of the child was located.

"You never get used to bodies, but whenever it comes to young children, it makes it even harder," said Sheriff Chris Bowman, "but we know we have a job to do."

The sheriff, who has worked for the county for more than 40 years, said he'd never seen the water so fast, so deep.

"The water was up in some places an estimated 20 foot deep, with running water that was going so fast. I've never, never seen anything ... so much damage at one place, from water."

In addition to the deaths at campground, a motorist was killed in the county while traveling on a road that was washed out by rising water, Gillespie said.

“Just massive amounts of flooding,” Gillespie said. “We've had approximately 50 roads across the county (which) have been compromised. Four bridges have been washed away.”

Swift water rescue personnel and local fire departments saved 31 people from their vehicles, some of them hanging onto their campers, according to Gillespie. He said three people were taken to a local hospital for treatment, and two have been released.

The campground is approximately 50 miles (80 kilometers) north of Charlotte, where a portion of Interstate 85 was closed because of flooding, and city officials said emergency personnel were performing water rescues. The University of North Carolina at Charlotte told students not already on campus to stay away because of widespread flooding.