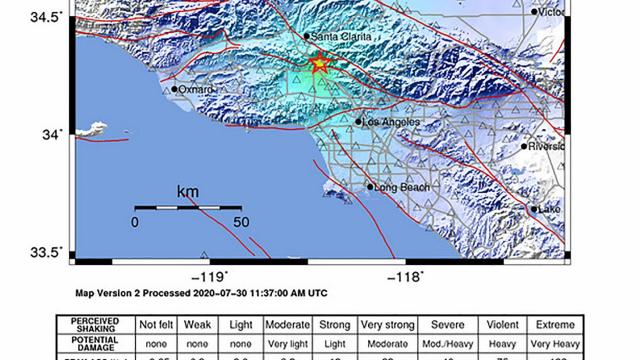 A 4.2-magnitude earthquake and its aftershocks rolled through the Los Angeles area early Thursday, but there were no immediate reports of damage.

The U.S. Geological Survey showed that the earthquake struck just over a mile north of Pacoima, a neighborhood in the San Fernando Valley, about 4:30 a.m. local time. The area shuddered with aftershocks following the quake, which was about 5 miles deep.

There was a small chance that a larger earthquake could occur, but that likelihood decreased over time, the Southern California Seismic Network said.

It was the largest earthquake in that area since a 4.4-magnitude one struck in March 2014. A Los Angeles Police Department spokeswoman, Norma Eisenman, said there were no immediate reports of damage.

A spokesperson for the city’s fire department was not available.

John Bellini, a geophysicist with the National Earthquake Information Center in Colorado, said in an interview that an earthquake of that magnitude could generally shake items off shelves and cause cracks in plaster or windows, depending on the condition of a structure.

But often, he added, the reaction to such a jolt could be outsize in Los Angeles and its surrounding communities, home to about 18 million people.

“It is a normal-size earthquake for California,” he said. “You get these from time to time, but they are not as common in the Los Angeles area, where lots of people feel this. That is why there is so much interest.”

While people in California sometimes speak with dread about an impending earthquake of a much greater strength, the geological survey forecasts a 31% probability of a 7.5-magnitude quake occurring in the Los Angeles area in the next 30 years.

Bellini said he saw no indication the earthquake Thursday was a foreshock that would lead to a larger seismic event.

“There is always the chance that is going to happen,” he said, adding it was “very unlikely that it does, but theoretically possible.”

This month, a group of researchers estimated a 1% chance that a major earthquake could happen along a stretch of the San Andreas Fault in the next 12 months. Other researchers contested their findings, saying that the analysis overstated the likelihood of such an earthquake.