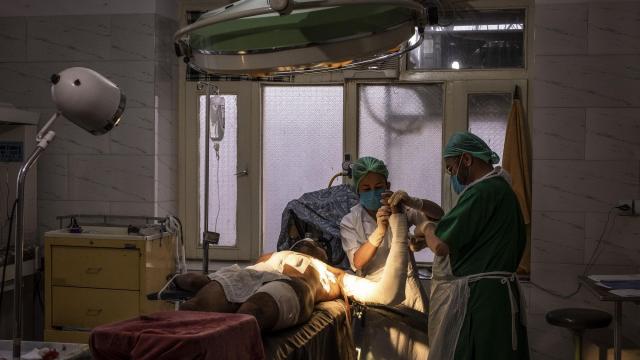 GHAZNI, Afghanistan — U.S. forces experienced the worst loss of life this year in Afghanistan when three soldiers were killed in a Taliban bombing Tuesday. Three more soldiers and an American contractor were wounded.

The deaths took place when a roadside bomb went off near Ghazni City, in the southeastern province of the same name, killing Special Forces soldiers three months after they were sent to save that city from falling to the Taliban.

The Pentagon declared an end to U.S. combat operations in Afghanistan in 2014, but since that time, the Taliban have expanded their reach, and the Americans have rejoined the fray.

A witness said the bomb in Ghazni went off as a U.S. convoy passed on the highway. “The convoy set off a roadside mine, and there was smoke all over the place,” said the witness, Haji Abdulamin, a local resident. “The road was blocked, and a few minutes later, helicopters landed and took the dead.”

Here’s what to know about the state of U.S. and Afghan forces in the seemingly intractable conflict, and why Americans are still dying in a city they liberated from the Taliban months ago.

— The Taliban have exacted a grim toll since 2014.

Regular U.S. combat operations in Afghanistan came to an end in 2014, but since that time, the Taliban have greatly expanded their reach, controlling more territory — and killing more Afghan soldiers and police — than at any time since they were ousted from power in 2001.

President Ashraf Ghani recently revealed that 28,529 Afghan security forces have been killed since 2015, a number that works out to an average of about 25 deaths per day.

President Donald Trump, in an interview with The Washington Post on Tuesday, said America is continuing its military presence in Afghanistan only because “experts” told him the United States needed to continue the fight.

— Al-Qaida is back, making matters worse.

The Taliban is not the only concern for the U.S. military. Another American soldier was killed just three days earlier as a result of a firefight with al-Qaida, which had been considered all but wiped out in Afghanistan years ago, only to resurface suddenly in southwestern Nimroz province.

The military said in a statement that the soldier, Sgt. Leandro A.S. Jasso, a 25-year-old Army Ranger from Washington state, was shot accidentally by a soldier from an Afghan “partner force.”

According to the military’s statement on Jasso’s death, he was killed “when the partnered force became engaged in a close-quarter battle during an assault on one of multiple barricaded al-Qaida shooters.” It was the first time in recent years that the presence of al-Qaida was reported in that part of the country. Even officials from Nimroz province seemed unaware of it. Gen. Abdul Raqib Mubariz, the police chief of that province, described the insurgents in the fight with the Americans as Taliban, and added that 22 militants were killed.

“It is not confirmed yet if they had any affiliation with al-Qaida,” he said.

The Taliban insurgents maintain that they are no longer allied with remnants of al-Qaida in Afghanistan, although they were in the past. Al-Qaida’s numbers were believed to be very low, at least until recently, although insurgents from the separate Islamic State group have grown in numbers lately.

President Barack Obama allowed U.S. combat operations to resume in 2015 and Trump increased the number of special operations troops in the country, but they are still thin on the ground.

Instead of spreading tens of thousands of troops across the country, patrolling and fighting militant groups from small outposts, the new approach means the U.S. military stays mostly behind the front lines, relying on Afghan troops, U.S. airstrikes and special operations forces to hold territory.

There are only about 14,000 U.S. soldiers in Afghanistan, and half of them are logistics troops and trainers. By comparison, in 2012, there were 140,000 American and other foreign troops in Afghanistan.

The Afghan commando forces number 20,000, and are not only spread thin, but lack the training of their American counterparts. They have some of their own air support, but it is not nearly as robust as that of the U.S. Air Force and other units. And the Americans generally will not carry out airstrikes on behalf of Afghan forces unless there are U.S. forces embedded with them.

Overall, there are just not enough U.S. commandos to go around in a country where major Taliban offensives are typically taking place in more than half of the country’s 34 provinces. — The insurgents are not giving up Ghazni, or anywhere, easily.

Tuesday’s attack, for which the Taliban claimed responsibility, illustrated a grim reality in Ghazni: While U.S. support for the Afghan military helped force the Taliban out of the capital in August, the insurgents are not giving up easily.

The strategic province is important to the insurgents’ efforts to cut off the national capital, Kabul, from the Taliban heartland in the south. Three months after the battle for the city, the insurgents still control much of the province around it, a seesaw struggle that is being repeated throughout much of the country.

Afghan officials in the province describe two wars for Ghazni.

Kamrani said eight of Ghazni’s 18 districts are now completely controlled by the Taliban, leaving the city ringed by insurgents and making the highway that connects Kabul to Kandahar, in the south, possibly the most dangerous major road in the country.

The death of Jasso — the American who was shot accidentally by a soldier from an Afghan “partner force” — did not appear to be an insider attack. But fear of such attacks has greatly strained relations between U.S. troops and their Afghan allies, three soldiers deployed with Afghan units recently said, speaking confidentially because they were forbidden to discuss operations with a journalist.

Last month, an insider attack narrowly missed killing the U.S. commander in Afghanistan. A bodyguard for the powerful Kandahar police commander, Gen. Abdul Raziq, opened fire on both men and a group of other officers. He killed Raziq but missed Miller, although he wounded a U.S. brigadier general. Raziq was widely popular in the south, and a toxic rumor spread among Afghan security forces that Miller had somehow engineered the Afghan general’s killing, explaining why he survived. That further soured relations between the two allies, and has put the Americans even more on guard.

Last week, Miller paid a visit to Ghazni city to express support for the Afghans there. During his visit, the insurgents fired a rocket into the city, but officials said it did not land anywhere near him. Still, the Americans were clearly taking no chances.

Miller was pictured during that visit carrying an M-4 automatic rifle, something generals rarely do; all of the U.S. soldiers with him were heavily armed. None of the Afghans seemed to be armed.


Copyright 2018 by New York Times News Service and WRAL.com. All rights reserved. This material may not be published, broadcast, rewritten or redistributed.