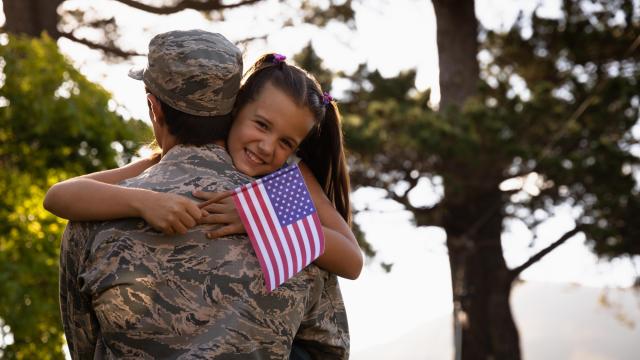 America is often referred to as the "land of the free and the home of the brave." And for many United States military service members, both active and veteran, this is true.

Merriam-Webster lists more than a dozen definitions of "home." Home can mean anything from your place of residence, or a familiar or usual setting, to a "social unit formed by a family living together" or a place of origin.

Home represents a lot of different things to different people. Being in the military, which often means undergoing training or being stationed away from home, can reframe a person's notion of home. Additionally, servicemen and women develop formidable bonds with their fellow military brothers and sisters, expanding their sentiment of family.

Because of this, those in the military have unique perspectives on the concept of home, and three servicemen offered their personal experiences and insight.

Carlisle was working in RTP at a pharmaceutical research company when he decided he wanted to join the military in 2015. Bored with office life, he wanted to try something different. As an officer in the Air Force, Carlisle works in aircraft maintenance.

"I'm in charge of a unit that does aircraft maintenance, and it's about 230 people that I'm in charge of. I manage them, and do a lot of planning, scheduling and talking with the pilots — they're under my leadership," Carlisle explained.

Born and raised in Raleigh, Carlisle has been stationed in Florida and now, Georgia. He said Raleigh will probably always be home to him, but he's making a new home for himself in Georgia where he purchased a house using a VA loan.

"I think for me, Raleigh is definitely still home. It's where I was born and raised and then I went to N.C. State, so my whole life for 26 years was in Raleigh," he said. "But now, I don't have any family that lives there anymore. It's still where all my friends are, and still very much home to me. I guess in the military everyone kind of has two homes. One of the first things you ask people when you meet them is, 'Where are you from?' That's a part of everyone's identity I guess — where their home is. But we all establish a little second home wherever we're stationed."

Hogan enlisted in the Marines during his senior year of high school. He attended a semester of college at North Carolina State University before entering boot camp, and went back to college after boot camp, serving in the Reserves. He was activated between his sophomore and junior year for a year and spent seven months deployed in Iraq.

"To be plucked out of college at the age of 20 to go overseas was definitely quite the experience," Hogan said. "I'm a supply guy by trade, so when I was over there, I handled mainly shipping and receiving everything that came onto base. So anytime there was a convoy that would come in we would help get the stuff off [the truck] and get it to the right units. And anytime units had stuff that needed to go out we would [help with that] — we were basically the post office for the base."

Hogan is a first-generation American — both of Hogan's parents are English. In addition to the call he felt to serve his country, he also knew that joining the military would help pay for college.

"I've always had an interest in the military. I knew it would be a main source of income to help pay for college, but it was also the fact that both of my parents are English," he said. "I felt like I needed to do something to kind of own up to my citizenship. I was born here, but neither of my parents were citizens at the time. My dad has since become a citizen. It was kind of just a way of saying I belonged here because I helped serve."

When Hogan returned from Iraq, he finished school and subsequently moved to Charlotte with a few months left of his Reserves contract. In 2014, he was honorably discharged, and he purchased his first home with the help of a VA loan. Having lived in multiple cities in North Carolina and overseas during his deployment, and having family scattered across the United Kingdom, "home" is a complicated term for Hogan to define.

"I have a huge family. My dad's one of eight and my mom's one of six; they've all got kids, and a lot of those kids have kids now too. I have around 50 cousins and every single one of them, except for one, lives in England. And that one that doesn't live in England lives in Canada," Hogan said. "Saying home is where your family is — that answer doesn't really apply to me. I definitely think there's an aspect to family being close by to support the concept of home, but as far as home goes, I mean it's not just where you sleep, but it's where you feel most comfortable."

"In a non-PC way, and this is the Marines coming out of me, home is where you feel most comfortable when you go to the bathroom," Hogan laughed. "We've all been on a vacation enjoying ourselves, but we still think, 'I can't wait to get home.' It's the place where you can kick off your shoes, have control of the remote, and feel the most comfortable."

Originally from Maine, Bode was recruited to a college in Virginia. After graduating, he said he spent a few years "floundering" and didn't know what he wanted to do with his life.

"I decided I wanted to work for a federal agency. When I put in my application, people told me that I looked good on paper, but I didn't have any experience. It was mentioned that a lot of veterans with excellent leadership perspectives or combat experience were getting picked up [for jobs] a lot faster," Bode recalled. "They said, if you want to make yourself more competitive, either go to a local law enforcement agency or go into the military and then try again."

Bode joined the Army as a medic and loved it. As part of a force surgical team, he spent a few years deployed in Afghanistan on active duty. After his active service was complete, he joined the Army Reserves.

"I didn't realize that when I was deployed, my wife was pregnant and ended up having a son while I was overseas. And when I got back, my whole world had changed. I'm a dad, I was living in Raleigh, we were renting an apartment. And we thought, well, we really like this area and I'm probably just going to stay here to buy a house locally and then I'll just get a job with the state. I ended up getting hired by the SBI," Bode said. "That's where I work now and I'm still in the Reserves, still maintaining my medic certification. I'm not on the medical team anymore, now I'm on an intelligence team."

Bode's life is a reflection of both his family's legacy and the fact that life doesn't always go according to plan — but you can make the most of it along the way. From Maine to Virginia to Fayetteville to Raleigh to Afghanistan and back to Raleigh again, Bode has held on to both his ambition and his family.

"When I hear the word home, 'family' is what pops into my head. That's something that I learned, no matter where I've gone," Bode said. "If you've got family or people that you consider family with you, then it makes it so much better."