On Wednesday, three daughters brought their veteran fathers together for the holidays, hoping they'd hit it off.

John Allen was a weapons specialist in the Korean War.

Jim Valentine was an Air Force pilot in Vietnam. 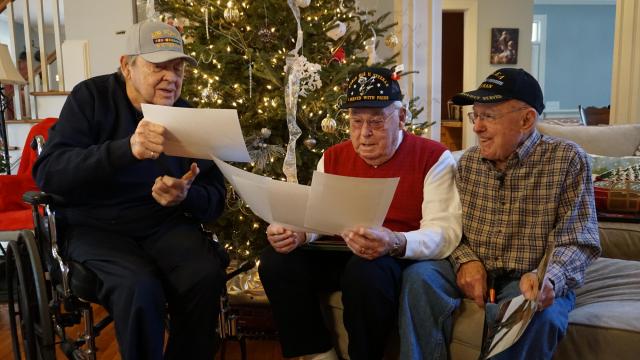 "I just got interested in planes and kept that interest," he said.

Jim Quigley was in the Navy.

"These two guys and any of their comrades are heroes as far as I'm concerned," said Valentine. "They're the reason I ended up in the service.​​​"

It's a shared sacrifice only they can understand.

"It's kind of a warm feeling to sit next to a couple of guys that were there," Allen said. "There's representation here of who we are. And what we did."

Allen said it's an unexplainable feeling.

"You don't put it into words. You feel it, that there are people here who did the same thing," he said.

And just like the holidays brought strangers together this year, they'll bring friends together next year.