Iran blames the US and Saudi Arabia for military parade attack 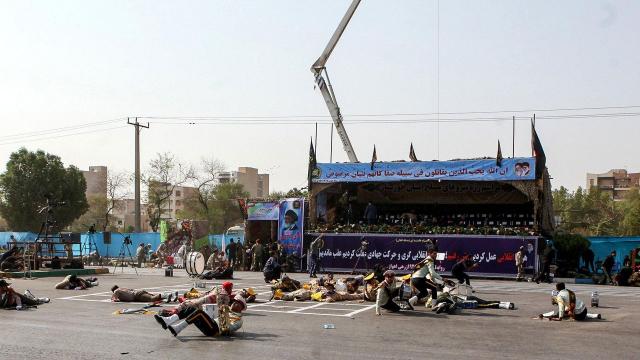 (CNN) — Iran knows the "perpetrators" behind Saturday's attack on a military parade in the southwestern city of Ahvaz and "will not leave the bloodshed unanswered," Iranian President Hassan Rouhani said Sunday.

The Islamic Revolutionary Guard Corps accused Saudi Arabia of supporting perpetrators of the attack that killed 29 and wounded 70 others Saturday, while Rouhani blamed "foreign mercenaries" backed by the United States.

"The government is ready to counter any action by the US, and the Americans will regret this," Rouhani said. It was not immediately clear if this remark referred to the US withdrawal from the 2015 Iran nuclear deal or to the Ahvaz attack.

"Most importantly, today Americans are bullying the world more than ever and continuing their unilateralist policies," he said of the nuclear deal.

The United States will not accomplish "their goals in Iran," he added.

Rouhani made the remarks ahead of a trip this week to New York, where he will attend the UN General Assembly.

US dismisses accusations as "rhetoric'

But Nikki Haley, the US ambassador to the United Nations, rejected Iran's accusations.

"You've got a lot of rhetoric coming from Rounhani. The United States condemns any terrorist attack anywhere, period. We've always stood by that. I think what Rouhani needs to do is he needs to look at his own home base," Haley told CNN on Sunday.

"He can blame us all he wants; the thing he's got to do is look in the mirror."

US State Department spokeswoman Heather Nauert on Saturday referred to the attack as "terrorism," saying, "We stand with the Iranian people against the scourge of radical Islamic terrorism and express our sympathy to them at this terrible time."

Saturday's parade was part of nationwide celebrations in Iran to mark the 30th anniversary of the end of its eight-year war with Iraq.

Gunmen opened fire on armed forces marching inside a park as well as spectators who had gathered to watch the parade, Brig. Gen. Abolfazl Shekarchi, a spokesman for the Iranian armed forces, told Mehr, a semi-official Iranian news agency. Three of the attackers were killed during clashes with the security forces, and one other was arrested, news agencies reported.

"The terrorists disguised as Islamic Revolution Guards Corps and Basij (volunteer) forces opened fire to the authority and people from behind the stand during the parade," said Gholam-Reza Shariati, governor of Khuzestan province, according to the state-run Islamic Republic News Agency.

The attack happened in Khuzestan, a province that borders Iraq and has a large ethnic Arab community, many of them Sunni. It was a major battleground during the Iran-Iraq War that killed half a million soldiers in the '80s.

"Terrorists recruited, trained, armed & paid by a foreign regime have attacked Ahvaz," Zarif said in a tweet, adding: "Iran holds regional terror sponsors and their US masters accountable for such attacks."

"The individuals who fired at the people and the armed forces during the parade are connected to the al-Ahvaziya group, which is fed by Saudi Arabia," Sharif said. Saudi Arabia hasn't responded to the allegations.

Speaking at a military rally in Tehran, he said Trump will fail in the "economic and psychological war" he's launched against Iran, just as Hussein failed in his war against the Islamic Republic.

"Iran will neither abandon its defensive weapons nor will reduce its defense capabilities," Rouhani said.

"Rather it will increase its defense power day by day. The fact that they are angry at our missiles shows that these are the most influential weapons Iran has."

Regional governments condemned the attack and offered their condolences, including Hamas and Qatar and a number of Saudi Arabia's reginal allies such as Kuwait, Oman and Egypt. Saudi Arabia was missing from the list of customary diplomatic condolences.

Syrian President Bashar al-Assad and Hezbollah, two of Iran's closest allies, issued statements condemning the attack, with Assad referring to outside involvement and Hezbollah echoing allegations of US blame.

"We are with you with all the power we have" to stand against these terrorist acts, Assad said in a cable to Rouhani, the state-run Syrian Arab News Agency reported. "We hope that the backers, financers and proponents of terrorism will understand that this danger threatens mankind as a whole."

Hezbollah in a statement said "satanic and malignant hands are behind this terrorist action," and accused the United States and its allies of conducting it "directly or by proxy." The attack is intended to undermine Iran's security and stability and as "punishment for ... its rejection of American dependency politics," the statement said.

Iran's Foreign Ministry summoned the ambassadors of the Netherlands and Denmark, along with a senior British diplomat, on Saturday to issue a strong protest, Iran's state-run media reported.

Bahram Ghasemi, a Foreign Ministry spokesman, said Iran "re-emphasized" to the diplomats a previous warning about the presence in their countries of a group that Iran classifies as terrorist and wants its members arrested and prosecuted.

According to IRNA, Ghasemi said it is unacceptable that members of a terrorist group be allowed in those countries and not be included on the European Union's terror list only because they have not committed crimes on European soil.

The Iraqi border crossing authority said Saturday that the Iranian side was temporarily closing al-Sheeb and al-Shalamcha crossings between the two countries after the attack.

There was confusion Sunday as for who carried out the attack, with several groups named in local media but only ISIS claiming responsibility -- without any evidence to support its assertion.

The separatist Patriotic Arab Democratic Movement in Ahwaz issued an emphatic denial after IRNA reported it had claimed responsibility.

"On behalf of #PADMAZ organization we reject all accusations and we insist that PADMAZ organization is a civil political movement and has nothing to do with what (happened) today in #IranMilitaryParade attack," the group, using its acronym, said on unconfirmed Twitter and Facebook accounts.

Another group, the Arab Struggle Movement for the Liberation of Al-Ahwaz, was also accused of perpetrating the attack, but a spokesman, Yacoub Hor Al-Tustari, told CNN his group was not to blame.