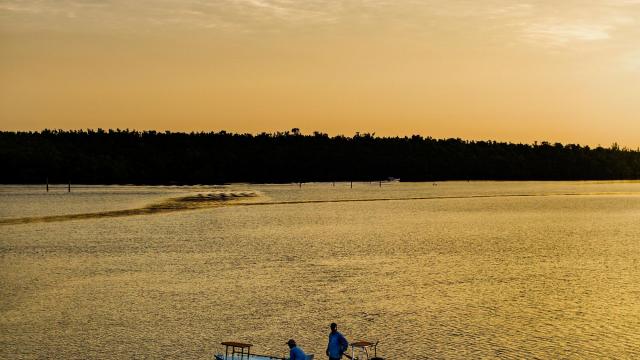 When John Stark was a young boy, his father brought him to this hardscrabble village at the mouth of the Barron River to fish. They came all the way from San Antonio to stand at the base of the bridge that leads to Chokoloskee, here at the top of the Ten Thousand Islands, at the edge of the Everglades, at the back of beyond.

The water ran past them, fast on the tide into the bay, off toward mangroves and channels in every direction, vast and mysterious, down to the Gulf of Mexico under pinwheeling terns. Stark, the young boy, stared out at all of this, a child of the desert in dank, humid air, and then he looked up at his father and said that when he grew up he was going to play professional soccer in Italy and then he was going to come back to Florida and be a fishing guide.

The second part came true. Stark is now 49, and he told this story in the gloaming just before dawn, standing at the boat ramp behind Captain Jack’s Airboat Tours on Collier Avenue, getting his 16-foot Hell’s Bay skiff ready for a day’s work: eight hours of looking for fish with a stranger.

He runs his boat through shallow water, mile after mile of channel and flats, to the places he wants to be for particular reasons at particular times. Then he cuts the motor and clambers onto a platform above it to pole his client into casting distance of fish perhaps only he sees.

The targets are snook, tarpon, redfish, sea trout, black drum. The angler stands on the bow and waits to be told when to cast and where. Stark waits to see how that will work out. Professional guiding, say professional guides, can be like fishing with a broken rod.

He had arisen at 4 a.m. in the house he shares with his wife and two stepdaughters, in Lehigh Acres, east of Fort Myers. He had made coffee and padded into the garage where he stores his boat and checked his rods and flies, made sure there was water in his cooler, a few bags of nuts to eat.

Then he hooked the trailer to his truck and sat for a while in an Adirondack chair, drinking coffee and listening to the frogs in the dark. It was rainy season in South Florida, and they were croaking loudly, everywhere. Eventually he stood and started the truck. There was Hall & Oates on the satellite radio, and “I Can’t Go for That” drowned out the noise as he pulled out of the driveway, bound for saltwater 65 miles south.

It has been more than 15 years of this now for Stark, the first half of them difficult beyond comprehension: learning the water and the seasons and the business against the backdrop of a recession that hit his neighborhood hard, learning the mysteries of the fish.

“Curiosity is the secret,” he said. “The desire to figure it out.”

In the Everglades, no one is going to figure it out for you. Steve Huff, a legendary guide and fisherman here, told Stark early on, “I’m not going to tell you anything.” He did not say it unkindly, Stark recalled. He did not lie to him, either.

“If you can’t figure this place out and if you don’t love doing every part of being a guide,” Stark said, “if you don’t like working on the boat and the engine, tying the flies, poling around in the heat or dodging thunderstorms, you don’t belong here.” He was quiet for a minute. “Just go work at Target instead,” he said.

Stark drove, State Road 82 giving way to 29 right through Immokalee, just under the speed limit against a sea of cars moving in the opposite direction, toward Fort Myers and work. Soon he was entering a corridor running through preserved lands and swamp, the Fakahatchee Strand on his right, Big Cypress National Preserve on his left, canopies of red oak and the occasional stand of Australian pine, swaying cabbage palms, bald cypress, royal palm.

This was the top of an hour with two distinct halves, the first spent considering the day to come — “starting to lay out the jigsaw puzzle,” is how he put it — and the second on the water, trying to assemble it. The sky still looked like nighttime, and cars and trucks were now few and far between.

It was 6:30 a.m. when Stark crossed the bridge into Everglades City, the truck and trailer bumping softly over its rise and then coasting down the avenue toward the Marathon service station where he meets his clients. Many are regulars.

But two or three a month are new. They could be sharpies or rank amateurs, good people or demanding jerks. In a dark gas station parking lot 30 minutes before dawn it can be hard to tell. Stark shrugged in the glow of the dash light. He takes fishing those who booked him to find fish. Sometimes it’s great.

He swung into the parking lot of Captain Jack’s and made a slow U-turn so he could back his boat down the ramp. It was nautical twilight, the sun still degrees below the mangrove horizon, and the brake lights on the trailer gleamed red off water stained with mangrove leaves. There was the slap of jumping mullet in the distance.

He slid the boat into the water and tied it off to the floating dock beside the ramp. Slowly drove the empty trailer to where he parks it during the day, on Hibiscus Street. Walked over to the Marathon and purchased a can of iced tea. Then texted his son from his first marriage, living back in Texas, told him good morning, as he always does.

There were handshakes with the clients, two of them today, and everyone climbed onto the skiff. Stark powered up his outboard and sped down the canal toward the bridge. And then, at dawn, he was in Chokoloskee Bay, puttering in the center of the same vista he had stared at as a child, looking around and deciding where, today, on this particular tide, at this particular hour, he was going to search for fish. He turned the boat west and ran.