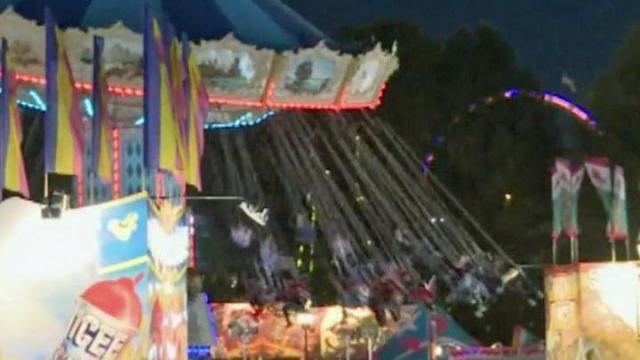 Raleigh, N.C. — State Fair organizers pronounced this year's event a success, confirming that it drew the third-largest crowds in its history by the time it wrapped up Sunday night.

"This is probably one of the most intense fairs there is anywhere," state Agriculture Commissioner Steve Troxler said.

“I always judge a fair by how much fun people are having, and it looked like people had a great time at the 2012 State Fair,” Troxler said in a statement.

Fairgoer Bryan Cantley came for the food and the childhood memories each dish brought back.

"Any of the fried food is incredible — the fried Oreos, fried Ho Hos, all that stuff, fried dough, hot dogs," Cantley said. "All of it's good. I have yet to have something at the Fair that's not good."

Some changes were made at the Fair this year in response to an E. coli outbreak that sickened 25 people last year.

"One of the things that went better than I expected is we did change the livestock traffic pattern this year and changed some of the access to animals," Troxler said.

Hand-washing stations got better lighting and larger signs, and some stations even explained how to wash hands.

"I think it's good they decided to do something like this, so people can be aware of the germs that are out there and how they need to take special precautions," mother Nakiya Blackmond said.

Whether fairgoers were scarfing down a fried Twinkie, screaming on the midway rides or petting animals in the petting zoo, there's a chance they got their picture taken by people watchers like photographer Amy Smith.

"Maybe they'll see it on the Internet sometime," Smith said. "I love the lights and the colors and the people moving."