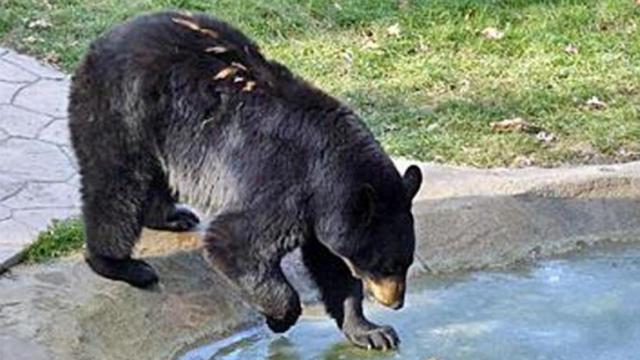 1) In North Carolina, the black bear is usually black with a brown muzzle. Occasionally, a black bear will have a white patch on its chest, also called a "chest blaze." In other areas of North America, it is more common for black bears to be cinnamon in color or a more rare white.

2) The average length of a black bear is 5 to 6 feet, and the average height is 2 to 3 feet when standing on all fours.

4) The current world record black bear was harvested in Craven County in 1998 and weighed 880 pounds.

6) North Carolina black bears primarily inhabit the Mountain and Coastal regions of the state and are uncommon in the heavily-developed Piedmont region.

7) Bears usually begin to enter their winter dens in mid-December and emerge in late March or early April. Bears in eastern North Carolina enter dens as early as November and as late as January. Weather and food availability can affect timing of den entrance and den emergence.

8) Females typically hibernate longer than males. Females with cubs emerge from their dens last in spring.

9) Black bears in North Carolina attain sexual maturity at age 2.5 years old and more than half breed at this age.

10) The overall gestation period for black bears is 45 to 60 days, and cubs are born from January through mid-February. An average of two to three blind and hairless cubs, weighing less than 1 pound, are born in winter dens.

11) Adult black bears have very low natural mortality rates, due to the fact they have no natural predators and they seem relatively unaffected by disease and parasites.

13) Overall, survivorship is higher among females than males, with males more vulnerable to mortality due to increased dispersal distances, increased movements during breeding season, and bear hunters' selectivity towards male bears.

14)  Bear hunting was unregulated until the 1930s when hunters and conservationists pushed for bear hunting regulations and for the creation of a state wildlife agency to manage wildlife and enforce wildlife laws.

15) During the 1986-87 hunting season, it became unlawful to take a bear with the use or aid of bait. However in 2007, the North Carolina General Assembly enacted new legislation that allows dogs to be released in the vicinity of any unprocessed food product.

16) Two types of bear hunting are utilized, still and dog hunting. The use of dogs to "strike" and "tree" bears has been a technique that goes back centuries. North Carolinians developed a strain of hound to hunt bears, known as the Plott Hound, which has been designated by the Legislature as the official state dog of North Carolina. Still hunting or stand hunting is also an important hunting method. This is a technique where hunters place stands on either trails, field edges or in areas frequented by bears to feed.

17) Hunters who harvest a bear are required to report and register the bear with the North Carolina Wildlife Resources Commission.

18) The N.C. Wildlife Resources Commission collects data on the date and county of harvest, as well as the sex of the bear harvested. Starting in 2009, they used the registration system to collect data on the weapon used and whether dogs assisted in the harvest.

19) Approximately every three years since the 1950s, the N.C. Wildlife Resources Commission has conducted a mail survey of licensed hunters to estimate population numbers of hunters for specific game species, hunter effort and hunter harvest. From 1976 through 2001, the survey did not ask bear-related questions. However, starting with the 2005-06 survey, hunters were asked if they hunted bears and for how many days.

20) The general public, when surveyed about bear hunting, indicated that a majority (63 percent) of respondents agreed that bear hunting, when properly managed, is compatible with viable bear populations, and 44 percent agreed that it is important for people to have opportunities to hunt bears in North Carolina.