2 shootings continue spate of gun violence this week in Durham

Two vehicles were pounded by bullets minutes apart, but no one was injured, police said.

Durham police said a woman was driving to work at 11:47 p.m. when her car was hit five to seven times on Fulton Street near Shirley Street.

The woman drove to the Veterans Affairs hospital and called for help.

Four shootings in Durham in less than 24 hours leave 2 dead, many worried

At 11:45 p.m., a man was driving on Interstate 85 South near Avondale Drive when a passing car started shooting.

The man’s car was hit at least 12 times, and its tires were flattened, police said.

The shooter drove away. A description of the vehicle was not available.

The shootings come after two people were killed and several others were hurt in multiple shootings Monday night and earlier Tuesday.

A 17-year-old man was gunned down outside Shepherds House United Methodist Church, at 107 N. Driver St., shortly before 2 p.m. Tuesday, police said. Zaeveon Hershel Tucker was shot at least once in the back and was pronounced dead at the scene, police said.

It was not clear if anyone was inside the church when the shooting occurred.

Authorities said two vehicles, a blue Dodge Ram pickup trick and a white Ford F150 utility truck, were believed to have been in the area during the shooting. The vehicles' occupants aren't considered suspects, police said.

Officials were also investigating Tuesday night after a shooting was reported near the intersection of West Club Boulevard and Watts Street.

The fatal shooting occurred around 10:30 p.m. at the corner of Dillard and Liberty streets, close to the Durham County Library and the Urban Ministries building.

Three victims were waiting for a bus when a dark-colored car drove by and started shooting.

Kerry Graham Jr., 24, of Durham, died at a local hospital from his wounds, police said.

A second man was taken to a hospital for treatment, and a woman was grazed on her hip by a bullet but wasn't taken to the hospital.

Two other people were shot moments before in the 1200 block of Wabash Street. The victims told police they were walking down the street when a dark-colored car started shooting. 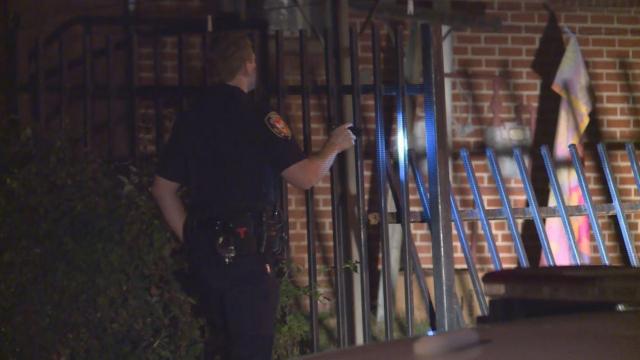 Durham police said they believe the shootings may be connected.

Statistics from the Durham Police Department show violent crime is up, including homicides, which are up 42% from last year.