Durham, N.C. — A Durham man has been charged after two people were wounded Wednesday afternoon in a shooting at a Durham Walmart, police said.

The shooting at the store in the New Hope Commons shopping center occurred shortly after 3 p.m.

A witness said two men started arguing in the store's produce section, and one pulled out a gun and shot the other in the stomach near the store entrance. A stray bullet also hit a Walmart employee in the foot, the witness said.

Atwater was arrested Thursday and was being held in the Durham County Jail without bond.

Police said the shooting did not appear to be random.

Shopper Jesse Kloss said the shots sounded like fireworks going off in the store. When he went to investigate, he saw someone on the ground near the front of the store.

"There was a person on the ground with blood streaming out," Kloss said.

Quaneika Thomas, who works at the store, said she grabbed some customers and led them to the back exit when she heard the shots.

"We can't just stop because of, you know, people and their mishaps," Thomas said of her decision to return to work after the shooting. "We just can't fail our company. We still got to do our duty."

Tammy Sofield said she was hit by flying glass from the shattered entrance door, but she said she and other Good Samaritans did what they could to help the wounded.

"There was a girl putting pressure on his abdomen and she said the shot went through, so I took the towel and was putting pressure from the back," Sofield said. "Another man came up and said he was a soldier with a medical background, and [he and] a nurse ... took over providing the pressure and care until the ambulance came over. We propped his feet up and was keeping him talking and was just trying to keep him positive and calm." 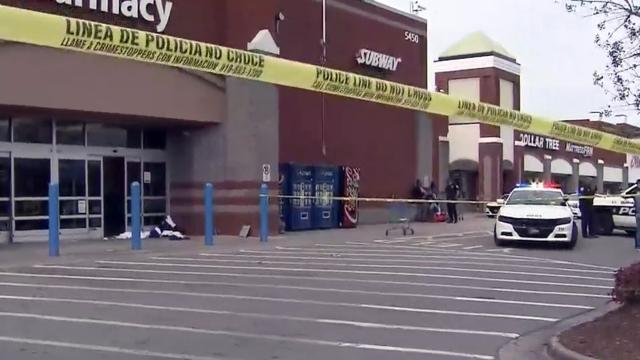 Durham County deputies spotted a light blue Mercury sedan on University Drive that matched the description of a car that sped away from the Walmart after the shooting, police said. When the driver didn't stop, a brief vehicle chase ensued, ending on Arnold Road, where three occupants, identified as two men and a girl, jumped out and ran.

Police caught all three and were questioning them Wednesday afternoon, but they later determined the occupants of the car were not involved with the shooting. The vehicle had been reported stolen, and police charged two men with possession of a stolen vehicle.

Walmart remained open as police investigated the shooting, although one entrance was closed.