Raleigh, N.C. — Four people under the age of 20 have been arrested after the weekend killing of 17-year-old Veronica Baker. The youngest was charged with her murder. 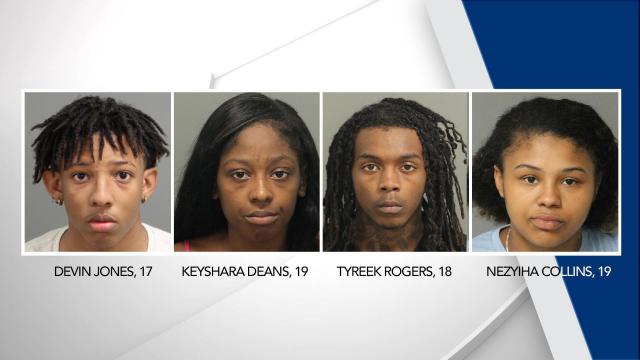 According to arrest warrants, Deans drove Jones away from the scene, and Collins and Rogers fled the state with Jones in an attempt to avoid arrest. All were arrested Tuesday evening.

Deans, Collins and Rogers appeared in court Wednesday afternoon. Jones did not appear in court because he is a minor.

Baker's parents have said they believe she was robbed. They said Baker was carrying a $600 Gucci purse when she was murdered.

The suspects were being held in the Wake County Detention Center with bonds ranging from $500,000 to $1 million.

The three who appeared in court Wednesday will have another court appearance next month.

Jim Baker, the victim's father, told WRAL News that his daughter knew her alleged killer and that the two went to school together. He believes that is why his daughter would have let the suspect into her car.

He also said Baker hung out with “good and bad crowds.” He explained Baker had never been in trouble before, but was a teenager and sometimes made poor decisions. He didn’t go into specifics about those troubles.

He said a video Baker posted on Facebook holding a wad of cash was taken at the family home, and his daughter was holding money he used to buy a car and was taken inside their home.

Veronica Baker was a graduate of Garner High School.

Jim Baker said he is grateful police made the arrests. He also said he was surprised the alleged perpetrators were so young.

“She didn’t deserve to get shot and killed and left in a parking lot," Jim Baker told WRAL on Monday.

Jim Baker also said they wanted to stop talk of Baker's murder being a hate crime.

Parents of murdered 17-year-old plead for information in case

"She was my baby. She was my baby who had a future. She had such big, big plans for her future," said Laura Baker, Veronica's mother. "My daughter would never hurt anybody. She didn’t have a fighting chance in this. She was a good girl."

The Bakers said their daughter loved camping, the ocean and helping others, and she was supposed to start college at Wake Technical Community College on Monday.