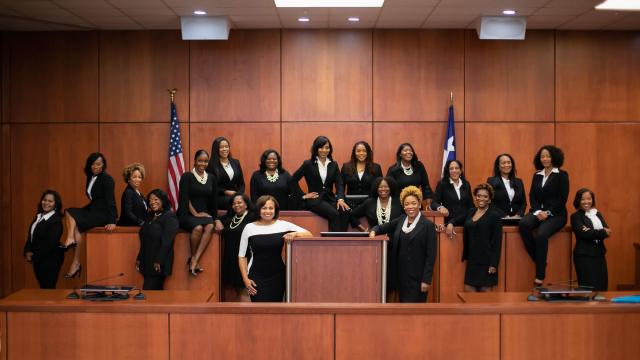 The photo was unforgettable: 19 black women, all dressed in black, gathered in a mock courtroom in Thurgood Marshall School of Law. All of them were running for judgeships in November.

On Tuesday, 17 of them won their races by double-digits in Harris County, Texas, the nation’s third-largest county, which includes Houston. Each of the lawyers, all Democrats ranging in age from 31 to early 60s, will join the bench in January for four-year terms in the civil, criminal, family and probate courts.

“Although we were doing everything we could — block walking, phone banking — I wasn’t confident that it would turn out the way it did,” said Latosha Lewis Payne, 44, a longtime lawyer in Houston who was one of the 17.

Each of the women decided individually to run. Some in the group had to win primary races in March. But once they realized they were all running against Republican incumbents in the fall, they rallied around a slogan called “Black Girl Magic” to celebrate the accomplishments of black women.

“We thought that it would probably make sense to develop a campaign around us,” said another winning candidate, Germaine Tanner, 43. “In the course of that, we got to really know each other. We became not only colleagues, but friends. It really kind of just happened.”

The photo was featured on hundreds of posters across the county, especially prominent in African-American neighborhoods, on billboards and even door hangers.

“All of the data suggests that African-American women are the core of the Democratic Party base, so it made sense to excite the electorate and design something around them,” said Dallas Jones, a Houston-based political consultant who came up with the “Black Girl Magic” campaign. “We wanted to show the power of having diversity in the courts.”

Jones used the image to mobilize voters across the electorate. In one push, he deployed teams to go to nightclubs and concerts and reach out to millennials. “It wasn’t just, ‘Hey, look at this picture,’ it was ‘Hey, look at this picture and take action,'” he said. “Go to the website and commit to vote. The 19 judges were a great opportunity to tell the story of the changing demographics of our county.”

Harris County had its largest turnout for midterm elections in its history, while also surpassing its turnout in two of the last three presidential-year votes. The county is 42 percent Hispanic, 31 percent white, 20 percent black, and 7 percent Asian.

The two women in the photo who lost their races — both making bids for statewide office — were already county judges, so they will keep their seats on the bench.

“All of us started running for our benches in early summer 2017, so there wasn’t any real thought given to any of us potentially making history,” Tanner said. “We were just trying to win our respective races.”

Payne, one of the women who prevailed on Tuesday, said the changes would go beyond the cosmetic because the women’s backgrounds would shape their rulings.

“We talked about coming in and being more compassionate,” Payne said of her newly elected colleagues. “Being more understanding of the poor and disadvantaged that come into the judicial system.”

She added, “I hope that our election will usher in courts that ensure an equal opportunity for justice for all.”