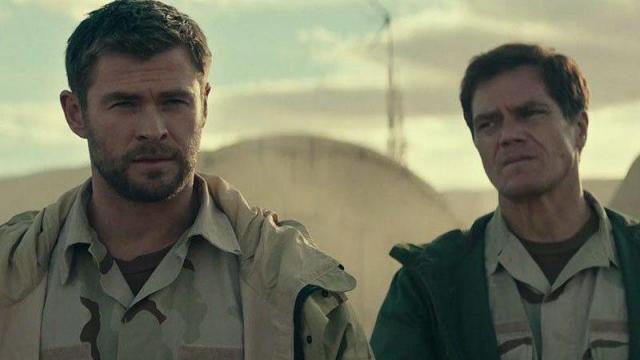 Raleigh, N.C. — I expected 12 Strong not to be a very good movie. Let me be clear. I have no problem with war movies. I have no problem with movies about the war on terror. I do have a problem with the cynical way these movies are marketed. You can almost picture someone in a Hollywood board room pouring over box office numbers and wondering aloud, “What will get people back to movie theaters in fly over country?”

Every year around this time we get some “based on a true story” movie set in either Afghanistan or Iraq between 2001 and 2010. Sometimes those movies are great like American Sniper and Zero Dark Thirty. Unfortunately when those movies aren’t great, they suuuuuuuuuuuuuck, a la Lone Survivor and 13 Hours.

12 Strong falls firmly in the middle. It is not to the standard of American Sniper, but it also isn’t groan-inducing. This is the story of the first Special Forces team deployed behind enemy lines to fight the Taliban after 9/11.

Chris Hemsworth (the one that is Thor, not the one that is not Thor) plays Captain Mitch Nelson. He is highly trained, but has never seen any real combat. In most cases, that may be a detriment, but as 12 Strong makes clear many times in its first 45 minutes, the war on terror was not like any other war, so what good would experience in traditional combat have done anyone? 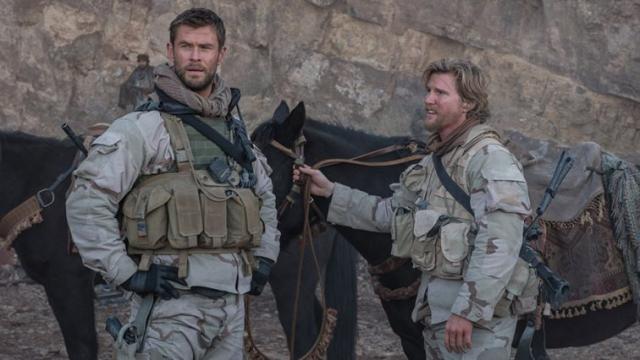 Nelson’s team is assigned to drop into a mountain village and meet up with General Dostum, played by David Neghaban, who you may recognize as the assassin that ends up becoming friends with Larry David on this past season of Curb Your Enthusiasm. Teaming up with Dostum’s band of fighters on horseback is the best hope for defeating the Taliban before they gain control of all of Afghanistan. The rub is that Nelson’s men then will, of course, be on horseback too. It wouldn’t be a problem if the Taliban all fought on horseback, but they have tanks and rocket launchers, so our heroes are decidedly at a disadvantage.

There are some good performances in this movie (namely Neghaban’s) but there are also some really bad ones. For instance, I am not entirely sure Elsa Pataky, who plays Mitch’s wife, has ever seen a camera before. Rob Riggle also shows up in a dramatic role for some unexplained reason. William Fitchner plays Nelson’s CO, Colonel Mulholland. His performance is great, as usual, but someone decided Fitchner should be shaved completely bald and that is off-putting.

12 Strong suffers when it gets bogged down in dialogue that is about anything other than planning attacks. The emotional stuff with family members or about what these guys will do when they get home isn’t particularly well written. Mitch’s conversations with Dostum about the realities of life among the Taliban and what it means to be a warrior as opposed to a soldier might be a little hokey at times, but they are undeniably compelling. 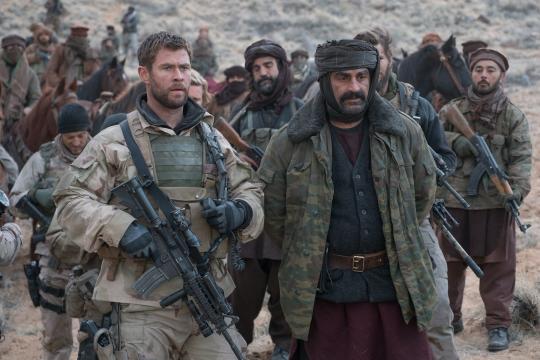 The movie pays off with one of the best battle sequences we’ve seen in a movie about modern warfare. Bombs drop. Rockets fly into the mountain side. Horses ride in front of a back drop of flames. It’s like what Michael Bay would describe if a woman asked him to describe his ultimate fantasy…except horses are there too.

After the screener ended, a buddy and I were sitting at ZinBurger at Southpoint and he asked if I liked 12 Strong. It dawned on me that this is a movie I might actually see again in the theater. It isn’t without its problems, but visually it is spectacular without relying on a ton of CGI-effects. We don’t get to see that much anymore, and when we do, I think it is worth acknowledging.

It also is a story worth hearing. Usually I am very much opposed to the Animal House style “here’s what happened to everyone” ending, and of course that is how 12 Strong ends. I am still not a huge fan of that, as I think it discourages people from reading more about this unit on their own, but this is a moment that potentially changed history, so I get it. This squad and their Afghan allies are honored with a statue at the World Trade Center site and because of declassification, this is the first chance most people will get to find out how they earned that honor.

Demetri Ravanos is a member of the North Carolina Film Critics Association and has reviewed movies for Raleigh and Company, Military1.com and The Alan Kabel Radio Network.