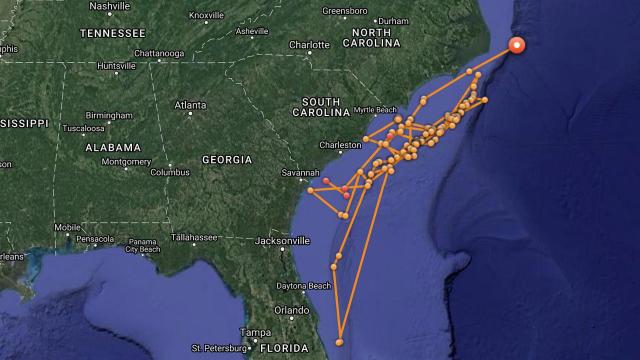 Hatteras, N.C. — A 12.5 foot long white shark was located off the North Carolina coast Sunday, according to Ocearch.

Ocearch is a non-profit organization researching great white sharks and other large predators. They catch and tag the animals to track their locations online.

The tracking device for Hilton, named because he was originally tagged off the coast of Hilton Head, South Carolina, pinged near Hatteras Island just after 2 p.m.

A “ping” is registered when the shark’s dorsal fin breaks the surface of the water and sends a transmission to an overhead satellite, according to Ocearch.org.

Hilton, who weighs 1,326 pounds, has pinged dozens of times near North and South Carolina since being tagged on March 3.