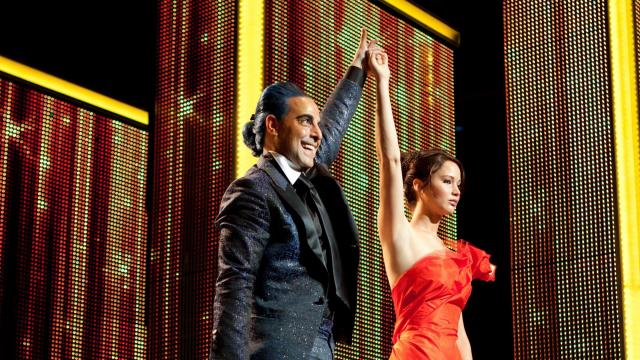 CNN — With more than 100 acting credits to his name, Stanley Tucci's career is like the best dinner party: There's a little something to suit every taste.

From Shakespeare to comedies, animated adventures and blockbuster franchises, Tucci is a shape-shifting master of all. His breadth of acting work is one the many reasons he's become an enduring fan favorite, capable of dominating social feeds with just the pour of a cocktail. Tucci has crafted a career that everyone can enjoy, developing an audience as wide-ranging as the characters he's played.

With so many titles, it's hard to play favorites. But if we were to select ten roles that show off Tucci's versatility, we'd start with the list below.

And if you find yourself craving something nonfiction, Tucci's still here to serve: He's hosting CNN's new Original Series, "Stanley Tucci: Searching for Italy," on Sunday nights at 9 p.m. ET.

This Sundance hit was a big screen breakthrough for Tucci, who co-directed and co-wrote the film. Set in the 1950s, "Big Night" tells the story of two brothers who dream of success with a restaurant that celebrates authentic Italian cuisine.

But the siblings --Tony Shalhoub as Primo and Tucci as Secondo -- are way ahead of their time; Americans in the '50s thought Italian food could be summed up with a plate of spaghetti and meatballs. To save their floundering restaurant, the brothers decide to go all out with an extraordinary "big night" extravaganza. The film is "one of the great food movies," Roger Ebert wrote in his review, "and yet it is so much more."

Where to watch: Amazon Prime Video

Remember the Shakespearean phase of the 1990s? There was "Shakespeare In Love"; "Romeo + Juliet"; "10 Things I Hate About You"; and "A Midsummer Night's Dream," which featured Tucci as the prankster fairy Puck. Accompanied by an all-star cast -- including Michelle Pfeiffer, Kevin Kline, Sam Rockwell and Calista Flockhart -- this classic turn further showcased Tucci's comedy chops.

Where to watch: Purchase on demand

Critics were lukewarm about this movie in general, but there was love for Tucci as a supporting player. The story isn't centered around his character, a lawyer named Link with a passion for ballroom dance, but he nonetheless delivered a performance the New York Times called "funniest of all."

Where to watch: HBO Max

With Meryl Streep, Anne Hathaway, Emily Blunt and Tucci all starring in this dramedy about the cutthroat inner workings of a fashion magazine, it's no surprise we're still quoting from it to this day.

"It's a f*****g brilliant movie," Tucci told Variety of this film's cultural endurance. "The brilliant movies become influential, no matter what they are about."

Where to watch: Purchase on demand

In this adaptation, written and directed by the late, legendary Nora Ephron, Tucci stars as Paul Child, the husband of culinary icon Julia Child. With a story that balances the couple's life in 1949 France with that of a present-day New York woman inspired to create Child's recipes, the movie "glides ... like hot butter in a skillet," The Boston Globe said in its review. "Much of the pleasure we have in watching [the film] comes from seeing Tucci and Streep connect."

By the time this adaptation of Alice Sebold's novel emerged, Tucci was well-known for his comedic and dramatic skills. But playing a 1970s serial killer who preys on teen girls? It was a "jolting" casting choice, Entertainment Weekly said in its review, adding that the actor's portrayal of a neighbor with a violent dark side was "honestly unsettling ... electrifying danger accompanies his every scene." The role earned Tucci an Oscar nod for best supporting actor.

Where to watch: Hulu

Tucci became the cool dad everyone wishes they had with this teen drama spin on Nathaniel Hawthorne's "The Scarlet Letter." As Dill Penderghast, Tucci played the easygoing parent of Emma Stone's Olive, a high school student who turns a salacious rumor into an opportunity. Whether it was his comedic timing, his pitch-perfect repartee with Stone and co-star Patricia Clarkson, or simply the fit of his T-shirts, this role added to Tucci's reputation as one of the Internet's favorite dads.

And now we arrive to what may be one of Tucci's most memorable roles: That of Caesar Flickerman, the powdered and primped talk show host in the blockbuster dystopian franchise "The Hunger Games." Tucci imbued his character with both wit and sensitivity through all four installments, resulting in a part as adored by the franchise's fanbase as its leading star Jennifer Lawrence. Almost 20 years after the success of "Big Night," Tucci won over a new generation of fans.

Where to watch: Hulu

In between "Hunger Games" installments, Tucci turned to a challenging project rooted in reality. This Oscar-winning film is based on the true story of a team of investigative journalists at the Boston Globe who unearthed a pattern of sexual abuse by Catholic Church priests. Tucci portrays an attorney representing the victims, part of a cast that delivers an experience "both damning and inspiring, depressing and heartening," the Los Angeles Times said in its review.

Tucci has shown himself to be an integral part of any ensemble cast several times over, but his latest project is a reminder that he can also take the lead. Alongside his friend of 20 years, Colin Firth, Tucci brings to life the story of a novelist with early-onset dementia who takes a road trip with his partner as his condition takes a turn for the worse.

Where to watch: In select theaters, on demand February 16