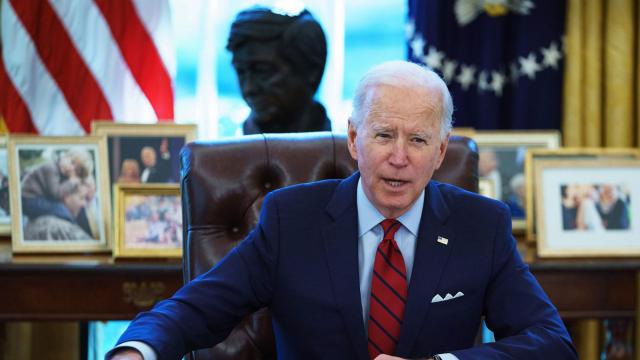 CNN — A group of 10 Republican senators on Sunday called on President Joe Biden to throw his support behind their own Covid-19 relief package framework, a negotiating position meant to force relief talks with the White House back to the middle.

In a letter sent to Biden, the lawmakers -- including Sens. Susan Collins of Maine, Lisa Murkowski of Alaska, Mitt Romney of Utah and Rob Portman of Ohio -- told Biden they "welcome the opportunity to work with (him) in a bipartisan manner to combat the Covid-19 virus and provide continued support to families struggling during the pandemic." One GOP aide familiar with the talks told CNN that the group worked all day Thursday and Friday, and by Saturday, they had broad agreement, but the details took time to figure out.

"In the spirit of bipartisanship and unity, we have developed a Covid-19 relief framework that builds on prior Covid assistance laws, all of which passed with bipartisan support," they wrote.

The senators said their framework includes a total of $160 billion for vaccine development and distribution, testing and tracing, and treatment and supplies, including the production and deployment of personal protective equipment. It would also include a new round of direct payments for "families who need assistance the most," extend enhanced federal unemployment benefits at the current level and provide $4 billion to bolster behavioral health and substance abuse.

An aide close to the process told CNN the plan is expected to be between $500-$600 billion, though lawmakers are still waiting to hear from the Congressional Budget Office on the estimated cost.

Portman, appearing on CNN's "State of the Union" on Sunday, wouldn't specify how much the group's package would cost, but said it will be "less than $1.9 trillion," the cost of Biden's plan.

"You know, our proposal is an example -- it's going to have all of the health care funding that President Biden has in his proposal, all of it. So there's a lot of bipartisanship," he said, adding separately that "if you can't find bipartisanship on Covid-19, I don't know where you can find it."

Republicans devise their own plan

In recent days, it had become apparent to Republicans that the narrative taking hold suggested the Democrats had a plan for Covid relief and Republicans could either stand in the way or agree to it. They didn't feel like there was a negotiating place for them to start and the frustration among Republicans was palpable.

As the week dragged on, one idea being floated was that they needed their own alternative to present to the White House. And most importantly, they needed 10 Republicans to be on board. One of the issues with the "Sweet 16" group is that they've only had 8 Republicans, which never was going to be enough to pass any bill. They needed 10 to show there were enough willing partners to give Democrats the 60 votes needed.

Any bipartisan plan will likely lose votes on the Democratic side, meaning for every progressive senator against the proposal, they'd need another Republican supporting it. Still, this idea of putting two plans side by side is one that aides and members have been discussing for several days as a way to force the conversation back to a bipartisan place.

Brian Deese, the director of the White House's National Economic Council, confirmed on "State of the Union" on Sunday that the White House had received the letter and said they would be "reviewing it over the course of the day."

"We've received the letter and we certainly will be reviewing it over the course of the day," Deese said. "What I will say is that the provisions of the President's plan, the American Rescue plan, were calibrated to the economic crisis that we face."

The President, he added, is "uncompromising when it comes to the speed we need to act at to address this crisis."

The proposal comes as Biden has suggested he's open to passing major portions of his $1.9 trillion Covid relief proposal through a procedural tactic known as reconciliation if Republicans refuse to move on the measure. The maneuver would mean the package would just need a simple Senate majority of 51 votes, rather than 60.

The Republican senators requested a meeting with the President in their letter.

"We request the opportunity to meet with you to discuss our proposal in greater detail and how we can work together to meet the needs of the American people during this persistent pandemic," the group wrote to Biden, adding: "We recognize your calls for unity and want to work in good faith with your Administration to meet the health, economic, and societal challenges of the Covid crisis."

Biden's proposed package, meanwhile, expands on many of the proposals in Congress' $3 trillion coronavirus relief bill from March and the $900 billion legislation from December, which was scaled back to garner bipartisan support in the Senate.

While Biden has said he is willing to consider less than $1.9 trillion in relief, White House officials made clear they are not interested in splitting up the legislation by getting a bipartisan vote on some aspect and then passing a separate package along party lines using reconciliation.

Asked Sunday if the White House was open to negotiating parts of Biden's proposal, Deese told CNN they were "certainly open to ideas."

"We welcome input to say where we may have not gotten everything right, where we could be more effective, certainly that's part of the process as we go forward," he said. "But what we really need to focus on now is what do we need to get this economy back on track and what are the resources necessary to do so."