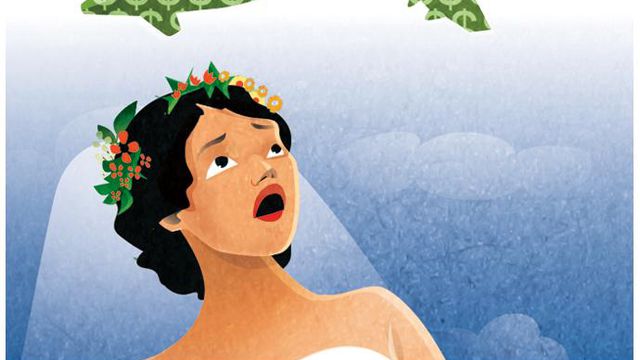 If you’re planning a big, fancy wedding — or even a more modest affair — you need to know how to put it all together properly. This is where wedding-etiquette preparation may help.

Etiquette coaches like Meier, some in partnership with hotels, are offering classes for couples and their families looking for guidance on everything from organizing rehearsal dinners to tactfully making adults-only requests in the invitations.

“There’s a huge return and resurgence to etiquette,” said Meier, who is a founder of the Plaza Hotel Finishing Program, which is held at the Plaza Hotel in New York. The hotel’s next wedding-etiquette class will be Nov. 7, from 7 to 9 p.m.; the cost is $150, with refreshments served.

Maggie Oldham, an etiquette coach based in St. Petersburg, Florida, was hired by the Watergate Hotel in Washington earlier this year to teach, among other classes, Etiquette for the Modern Bride. The cost was $50 per person for a two-hour lesson, with Champagne and light bites served. Her next event there will be Oct. 20.

Oldham maintains that understanding proper etiquette is more important than ever “as gender norms are changing, and as our culture has adapted.”

“Brides, grooms, even their parents, feel coming to a class is one more way to look polished and like a princess,” she said.

Here are 10 of the most asked wedding-etiquette questions.

Who do we have to invite with a plus one?

“We used to say, ‘No bling, no bring.’ But that’s completely out of date,” Meier said. “If they’re married, engaged, or living together, they get a plus one, no matter how you feel about that person.” If the couple is dating for six months or more, or is considered in a serious relationship a plus-one invite would be appropriate. “There’s something significant about half a year,” she added. “I know people who have gotten engaged within that time.”

Can we fire a member of our bridal/groom party?

Not unless you want to end your relationship. “Keep them in their wedding party, but redistribute their tasks to someone else,” Meier said, adding that it is culturally understood that being a bridesmaid comes with certain duties and responsibilities. Another solution? “If someone in the party isn’t pulling their weight, put the wedding planner in charge of making sure they’re doing what they’ve been asked to do, like helping plan the brunch, bridal party or shower,” she said. “Then you’re not seen as the bad guy.”

How soon can I reach out to people who haven’t RSVPed?

Soon. As in the day after the due date. “Typically, guests are given three to four weeks before the wedding date to RSVP,” said Lizzie Post, the great-great-granddaughter of the etiquette author Emily Post and who is co-president of the Emily Post Institute in Burlington, Vermont. “Once that date has hit, you can call, email or text people.” Post suggested using a friendly tone, saying you’re just checking in and hoping you and whomever you’ve included in the invite are able to come. “Try to get them in person so you’re not left hanging or have to chase after them,” she added. If you can’t reach them directly, give them another hard date. “At some point you will have to decide how long you’re going to hold the spot for them.”

Can we keep our wedding adults-only without offending anyone?

Yes, but tread lightly. “You don’t want to say. ‘No children,'” Oldham said. “Instead, the adults’ names should be the only names on the envelopes.” Some guests may still add their children’s names anyway. “If that happens, call the couple and say, ‘We are so thrilled you’re coming. But this is an adults-only wedding,'” she added. “The format is geared to adults, and not conducive to kids, so we don’t think they will enjoy the event. But we would love to catch up with all of you after we get back from the honeymoon.'”

Is it inappropriate to do a “honey fund”?

No, as long as you’re not asking directly for cash. “Some consider this tacky; others don’t. It’s a modern addition that’s become socially acceptable," Oldham said. “It’s a nicer way to say, ‘the couple wants cash,’ even though guests think they’re gifting an experience.” Truth is, most couples already live together. They own their household items and have picked out their décor. Money for their honeymoon is truly what they want. So that you don’t offend anyone, Oldham suggests having a short registry as well. “A smaller list means it will fill up fast,” she said. “So you increase your chances that guests who don’t know what to give will end up gifting to the honey fund.”

Do we have to pay for bridesmaids’ and grooms’ flights and rooms?

No. Phew. “That’s not your responsibility,” Meier said. “Some couples have a destination wedding so they can intentionally make their wedding smaller because they know a lot of people won’t come. And guests understand a destination wedding means it’s not mandatory to attend.” Once guests arrive, however, the party and events are on you. And your job doesn’t end there. “Help offset costs by organizing room blocks, group discounts, even negotiating car service rates,” she added.

Who do we have to invite to a rehearsal dinner?

A lot of people. “Immediate family, anyone who is in the wedding, and out of town guests,” said Suzanne Pollak, the dean of the Charleston Academy of Domestic Pursuits, a school specializing in etiquette and entertaining, in South Carolina. What the bride (and groom) might be really asking is: How much input do we have with the rehearsal dinner? “If you’re not paying for it, not much,” Pollak said. “You can share how you would like the evening to look, which shouldn’t upstage the wedding, and that the meal being served offers a different feel than the wedding, but if you’re not paying, your in-laws call the shots.”

Can we have a no-phone, no-social media wedding?

“Couples are now about having their guests present, and not wanting them to miss important moments,” Pollak said. This fall she will teach etiquette classes at the Beach Club Hotel at Charleston Harbor Resort and Marina, in South Carolina. For others it’s about privacy. “This is a new wedding etiquette,” she added. “It’s about a celebration, it’s not about advertising yourself and where you went over the weekend.” Those wanting a “no-phone policy” can say so on the invite. Others can share their wishes with a sign seen by guests upon arrival. “Saying something like, ‘Please leave your phone in your purse or pocket. We promise to share our photos with you afterward,’ is perfectly reasonable,” Pollak said.

Most asked question by besties: Do I really need to give multiple gifts?

Unfortunately, yes. “It’s expected and it looks really bad if you go to a shower and everyone has a gift but you," Pollak said. Best advice? Go big on one; small on the others. “Traditionally you would spend the same amount on a gift that the bride’s parents spent on you to attend the wedding,” Pollak added. “The wedding gift is your big one. If you’re going to the bachelorette party, and traveling, that’s your gift. Stick to the registry for the shower, and bar gifts, like two bottles of wine, so it doesn’t look like you’re re-gifting, Champagne, or an attractive bottle opener for the engagement party.”

Can we have a cash bar?

Absolutely not. Even a tip jar on the bar is considered distasteful. “If you’re trying to save money, cash bars are still considered tacky,” Oldham said. “If you need to control budgets, serve beer, wine and a signature cocktail.” Or switch your dinner to brunch and serve Champagne and mimosas. “You’ll probably slash your reception cost in half by having a morning ceremony followed by a late brunch reception,” she added.