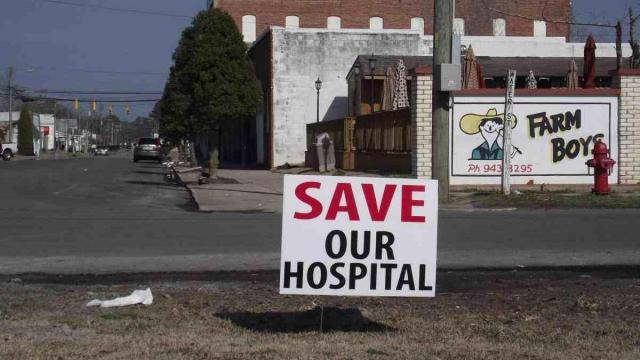 This article was written for our sponsor, the Health Advocacy Project of the NC Justice Center.

One in four rural hospitals are at risk of closing, according to a recent study by the Chartis Center for Rural Health. Since 2010, over 120 rural hospitals have closed across the United States, including seven in North Carolina alone.

This is a problem for rural North Carolinians should this trend continue, as the state has one of the largest rural populations in the country, with more than 2 million residents living in these areas.

Rural communities, which have historically faced barriers to healthcare access, continue to suffer as rural hospitals also financially struggle to care for a rising number of uninsured and underinsured patients.

"After working in rural areas for a long time, I have a pretty good sense of what rural hospitals are up against. We're in communities that have higher levels of unemployment, elderly patients with fixed incomes, and underinsured or uninsured patients," said Dr. Stephen Luking, a family physician in Reidsville, N.C., who has been practicing for almost 30 years.

In 2008, Cone Health Annie Penn in Reidsville had to close its labor and delivery department due to a lack of available obstetricians. The two obstetricians on staff during this time "simply couldn't provide the 24/7 obstetrics coverage that women in the area need and expect."

It's examples like these that prove that rural hospitals are struggling to find the resources and personnel to keep them running for some of the state's most vulnerable residents.

"Proximity to health care is directly correlated with positive health care outcomes for any community. I live in a community that is roughly 30 minutes away from a larger metropolitan area. This creates a barrier," said Reidsville Mayor Jay Donecker. "If we didn't have a hospital here in Reidsville — a city with a population of around 15,000, we'd have to drive to get care. That's fine when you're healthy. But if you need immediate care, are financially strapped, or have a lack of transportation — that's a problem."

Reidsville is fortunate to have a local hospital in Annie Penn, however, this isn't the case for many rural communities across the state. Additionally, rural hospitals habitually face financial hardships and staffing shortages that force them to make tough decisions.

COVID-19 has exacerbated these inherent challenges and Luking said that he's seen a rise in mental health cases, longer waiting lists for treatment, and more patients telling him "they don't have insurance to cover visits" over the last year.

Kaiser research from 2019 reported that 11.4 percent of North Carolina residents lack health insurance and it's unsurprising that many of these uninsured or underinsured residents live in rural communities.

"These financial burdens often fall on emergency rooms and resources have had to be expended in the middle of a pandemic to provide things like acute care and overdose management. When you think of how our resources are already groaning under the weight of a regular year, you can only imagine how it's been during the pandemic as people were hospitalized with COVID-19," said Luking. "We just have chronic challenges."

"I worry about the ability of small hospitals like Annie Penn and Morehead to remain profitable with their ever-growing responsibilities under the current payment system without Medicaid expansion," continued Luking. "Medicare and the current Medicaid system are only doing so much for a select group of people."

"Medicaid expansion is a torch that I've been carrying for quite a few years now," said Luking. "Smaller hospitals in rural areas tend to admit patients with things like pneumonia, heart failure, broken hips — those sorts of things — primary care. We're not doing fancy surgeries that generate enormous revenue. We need financial support. Let's be truthful here — whether you're a for-profit or not-for-profit hospital system, you have to stay profitable or you don't survive."

"There needs to be insurance expansion to compensate these hospitals for the caregivers they are," added Donecker. "Medicaid expansion is the right thing to do so that somebody doesn't have to look at their pocketbook before they decide if a loved one should go and get health care."

It's important to note that rural hospitals aren't just important to a community's physical health, but also to its financial health.

Oftentimes the healthcare system is the number one employer in rural areas and can make a town or city more attractive to potential residents and businesses. However, on top of financial barriers to running a successful rural health care system, hospitals in these areas frequently struggle to recruit medical providers, which can have a domino effect.

"One of the reasons you want a rural hospital to be efficient is not just for fiscal reasons — it's also because of staffing issues," said Donecker. "It's hard to attract staff to a hospital that has a low number of resources, patients, etc. It's one of those vicious cycles."

Luking said it's important to recruit talent and specialists locally so residents don't have to travel elsewhere for care. He said he wouldn't have moved to Rockingham County almost three decades ago if there wasn't the potential to provide a full spectrum of primary care.