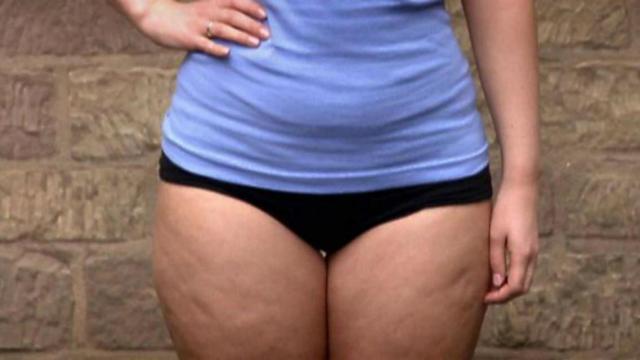 Ellen Klingler had tried for years to lose weight to little avail. She even underwent weight loss surgery. She lost 60 pounds but found herself fitting into the same size pants.

"That was the first clue to me that something wasn't right — it isn't right to lose 60 pounds and still be the same size. I should have been able to wear a new, cute pair of jeans," said Klingler, who considers herself an active person. "I've done CrossFit, I've run two half marathons. I can't do those things anymore, and that's a bummer."

Despite "crazy amounts of exercise and diet," Klingler felt like her legs were getting larger, more painful, and heavier by the day. Her general practitioner suggested she visit a vein doctor, and in 2015 she found herself at the Carolina Vein Center for venous insufficiency issues — blood flow problems. Her veins were treated, but after a quick Google search of "abnormally large legs" resulted in something called lipedema, Klingler had questions.

Luckily, Dr. Lindy McHutchison, medical director of the CVC in Durham, had some answers.

"Lipedema patients tend to have tired, achy, heavy legs that feel even worse at the end of the day. A lot of patients try to find a solution for their tired and swollen legs, and they come to vein clinics because the symptoms for unhealthy veins are nearly the same as the symptoms for lipedema," McHutchison said. "Sometimes, like in Ellen's case, it turns out that the patient also has lipedema contributing to their leg discomfort."

So, what is lipedema exactly?

"Lipedema is a fat disorder that essentially turns your body into a fat factory. It causes fat to abnormally distribute in areas of the body like the buttocks, hips, legs and occasionally the arms," McHutchison explained. "Doctors don't know the exact cause, but fat becomes irregularly distributed beneath the skin, especially in the lower part of the body. We don't know why, but the upper torso is spared, so there's a mis-match from the smaller upper body and larger lower body creating a classic pear-shaped silhouette."

She added, "The lipedema tissue is also swollen and has an inflammatory aspect. It's almost exclusively found in women, though, a few rare cases have been seen in men."

Although the condition was described 75 years ago by two Mayo Clinic doctors, the public is largely unfamiliar with lipedema, which is often confused with a condition of a similar name, lymphedema, which is extremity swelling caused by lymphatic blockage. Coined as the "painful fat syndrome" and the "fat that's not your fault," there is currently no true cure for lipedema, only effective therapies for symptoms.

Symptoms and characteristics of lipedema include:

Another hallmark of the condition, like in Klingler's case, is fat is considered resistant and unresponsive to diet, exercise or lifestyle modifications.

"There isn't a ton of research out there currently and there wasn't anybody who could tell me anything good about this, and there were no clear answers. But I felt strangely relieved because it felt like at least I wasn't crazy and there was, albeit small, a community of women who were in my same boat," Klingler said.

McHutchison explained many of her patients often feel similarly to Klingler — relieved to be diagnosed while simultaneously feeling validated; but then, also emotional about the chronic and progressive nature of the condition.

"There's no cure for lipedema, and while it is chronic and can be progressive, I tell my patients that management of symptoms is key. I reassure them that progression is not the rule, and that once diagnosed, and therapies and management begin, many don't necessarily progress to another stage," McHutchison said. "My goals are to prevent progression, decrease triggers, and improve their pain and discomfort."

McHutchison has done this for many patients, including Klingler.

"I'm managing my symptoms daily," Klingler said. "The fact that there's someone like Dr. McHutchison who feels very passionately about helping patients with this particular problem and educating people — it was such a relief to know that someone was working on my behalf and on behalf of all of these other women."

Another patient of McHutchison, Elyse Fox, struggled with vein issues for years, but things took a turn for the worse when she broke her ankle two years ago.

"I slipped in my backyard and broke my ankle into several pieces," Fox said. "I went to the doctor to get it set, and then, because of the severe swelling, I had to wait three weeks until they could schedule a surgery of rods, plates and screws to fix my ankle. My ankles kept swelling up and the pain was just beyond belief. I kept calling my doctor and going in, and I swear he thought I was being a hypochondriac."

Having been treated by McHutchison for vein problems before, Fox mentioned her issues to McHutchison.

"Dr. McHutchison went through all my records, looked at previous photos she had taken of my legs and said, you have lipedema. She started explaining to me all the symptoms and said that lipedema was probably contributing to the extensive pain and swelling in my ankle after my break. All of a sudden the light bulb went on — this is why, for example, when they take my blood pressure, my eyeballs feel like they're going to pop out [because of the tenderness]," Fox said.

For Fox, the diagnosis has helped her "put so much together."

For instance, five years ago, Fox's daughter got married and she went on a "mother-of-the-bride wedding diet." Like Klingler, Fox lost weight, but not in the areas she wanted to such as her hips, legs and thighs.

"I was the fittest I'd ever been, but I still had these huge legs. I could feel my ribs, it was unbelievable how skinny I was up top — I was a size two up top and a 10 in the bottom," Fox said. "I was really so frustrated. When people say, 'Oh well, it's your body type or whatever,' but now we know it's more than that."

Additionally, Fox suspects her mother had lipedema, as well as her sister. Research reveals there may be a genetic component to lipedema, which Klingler gets emotional about.

"When I learned more about it and that it was potentially a genetic issue, that's when I really turned up the gas on my search for information because I have two young daughters," Klingler said, as she got choked up. "I was like, I have to figure this out so that if I passed it onto them, I would have answers."

With the help of McHutchison, Klingler and Fox have been able to manage their lipedema with innovative things like McHutchison's specially designed trampolette — a mini trampoline that patients set under their feet when they're working, for example, so they can bounce to encourage lymphatic fluid drainage.

Additional treatments include compression therapies, lymphatic massages, and a specialized roller tool meant for those with tenderness and sensory pain.

"She has done a tremendous amount of things to help me with my horribly frustrated ankle problem, which only irritated my lipedema," Fox said. "The trampolette helps to move the fluids in your legs. Because of my broken ankle, there's no way I could actually stand on a trampoline. With this trampolette, I'm all business — I work 100 hours a week. I keep the trampolette under my desk and normally by nighttime, my ankles would be swollen, now it's not with this. It's addicting — I just bounce, bounce, bounce. It was unbelievable how great it works."

Both Fox and Klingler are aware that lipedema is something they will have to live with for the rest of their lives, but they feel empowered knowing they aren't alone in their struggle. They especially feel grateful to McHutchison, who is doing a work she feels called to do — which is treating patients with lipedema and also educating the public about the condition.

All three women agree that awareness is of the utmost importance.

The more that we can tell people about the condition, I think that is 50 percent of the journey right now — creating awareness," Klingler added. "The more people we bring to the table, the more likely we are to attract keener, sharper minds that are thinking about a cure and getting patients struggling with lipedema at least some temporary relief, if not permanent relief."