$1,500 gift boxes and romantic poetry: Restaurants are getting creative for Valentine's Day 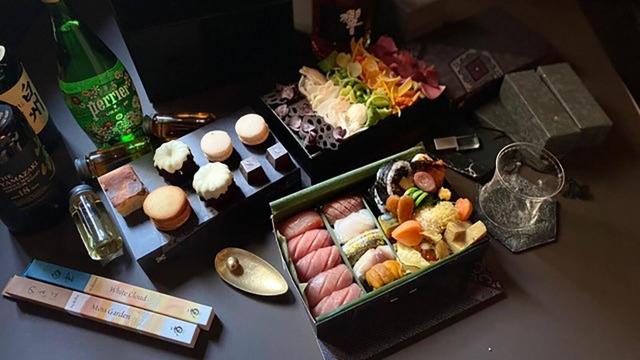 With Beuchert's temporarily closed, Markert is using the space for a takeout concept called Fight Club. On the menu this Valentine's Day is a three-course meal of lobster bucatini, wagyu steak and blood orange cake for dessert. It comes with some extras: A scented votive candle, house-made candies, a customized playlist and one of two poems by Markert, who used to dabble in poetry in high school.

"It just kind of sounded like a fun idea," he said. "I was like okay, well, time to dust off the old pencil, I guess."

It's not where he thought he'd be a year ago. "I was going into 2020 thinking that this was going to be our year," he said. He thought Beuchert's would elevate its menu, get more press and "crush" its financial goals. Instead, he's significantly reduced his staff, he said, and is taking it week by week.

"[We're] one bad month away" from dipping into an emergency fund, he said. Valentine's Day this year is an opportunity to edge out ahead on his weekly goals, and "give us a little bit more breathing room," he said.

Markert is not alone in trying to lift sales by thinking outside the box this Sunday. After 11 months of abrupt pivots, restaurant operators are coming up on yet another challenge: How to convince people that a pricey restaurant meal on Valentine's day is worth the cost if you have to eat it at home.

After Mother's Day, Valentine's Day is the busiest day for restaurants each year, according to the National Restaurant Association. "It's often a chance for restaurants to innovate special offerings and promotions," said Hudson Riehle, senior vice president of research for the group.

Over the last three years, the fine dining sector has seen a 56% boost in sales on average during Valentine's Day week compared to the four week period leading up to it, according to Black Box Intelligence, a data company that collects information from its restaurant industry clients.

This year will be different. Across the country, indoor dining is still restricted because of the pandemic. In some areas, leaders have conceded the importance of Valentine's Day by lifting restrictions ahead of the holiday. New York Governor Andrew Cuomo had planned to start allowing indoor dining at 25% capacity on Valentine's Day, but decided to lift the restriction earlier to help restaurants.

Across the country, Valentine's Day reservations were down 34% year over year as of February 9, according to reservations platform OpenTable. In an OpenTable survey of about 2,700 people in relationships or marriages conducted from Jan. 15-18, 39% of respondents said that this year, they'd be ordering in on Valentine's Day for the first time.

St. Anselm, a DC tavern that is "devoted to the pleasures of grilled meats," according to its website, wants to help customers recreate the experience of eating at the restaurant. That means sending people home with a raw porterhouse steak and an instructional video on how to cook it. Through a QR code, customers can access a video featuring St. Anselm chefs that shows how to prepare the meal in about 45 minutes. Customers can also buy a seasoned skillet so they have the right tools at home, said Eva Torres, director of restaurants for STARR Restaurants, which owns St. Anselm.

The open kitchen plan at St. Anselm means customers can watch the chefs prepare their meals, she said. "People come to us for special occasions," she said. "We're reminding them of what we are." St. Anselm's Valentine's Day kits (including the steak plus a jumbo shrimp cocktail, three sides and a banana split) are priced at $175 per party of two. That's about what they might expect to pay in person during the holiday, said Torres.

The box comes with food, of course, including sushi, marinated roast beef, mackerel, deep-fried blowfish, plus a sake pastry box and Suntory whiskey. But it also comes with unique add-ons, like Japanese glassware and a playlist. The box itself, made with mulberry bark, is reusable.

O.d.o. opened in 2018 and earned its Michelin star the following year. The restaurant was expecting an extremely busy 2020, co-owner Satoru Yasumatsu said. Instead, restaurant sales dropped 80% in 2020 compared to 2019.

Yasumatsu thought he would send out about five Valentine's Day gift boxes. He already has more than five orders in place, along with inquiries. Altogether, he said, he has enough supply to send out about 10 kits.

"There's a demand," he said. "There's people willing to spend."

While fine dining restaurants are struggling to bring in the sales they typically make around Valentine's Day this year, others have found the holiday to be an opportunity to reach more people.

"Since the pandemic started, every holiday has been a bit amplified," said owner Jake Dell. "There's a willingness to ship food and an understanding of the food shipment world that's been unlike any other time, collectively, in recent memory."

Katz hasn't had to lay anyone off during the pandemic, Dell said, mainly because of the company's shipping business, which allows people to send gifts with accompanying messages throughout the country.

A few years ago, Katz's started selling its Valentine's Day Package, which goes for $145 and includes two pounds of pastrami, pickles, babka and rugelach and a chocolate egg cream candle to "set the mood."

This year, Katz's expects to ship out around 1,500 boxes or more. "It's kind of a fun play on some of our more classic packages," he said.

It's also inspired some ... inappropriate messages. "Some real X-rated messages in there," he said. "Some really sweet ones too," he added. "I don't want to make it seem like everyone out there is just sending filthy messages."

Correction: This story has been updated to refer to o.d.o as a kaiseki restaurant and to correct a description of the playlist included in the o.d.o gift box.