1.4 Million Floridians With Felonies Win a Long-Denied Chance to Vote 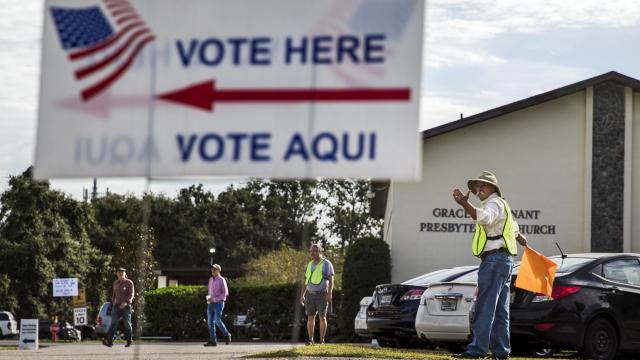 ORLANDO, Fla. — As soon as he turned 18, Keith R. Ivey got a voter registration card and tucked it into his wallet. He’s 46 now and has never used it.

Ivey, the co-owner of a used-car lot in Jacksonville, Florida, is one of the more than 1 million Floridians whose felony convictions prevented them from voting. “You want to be involved, and you’re not involved,” Ivey said, thinking about nail-biter elections he has watched from the sidelines because of the eight years he served for grand theft.

No longer. On Tuesday, Florida voters approved a measure to restore the voting rights of those with felony convictions who have served their sentences, as long as the crime committed was not murder or sexual abuse.

Florida has become known for its razor-thin election margins, and exactly how the change will affect the state’s politics nobody knows for sure. What is clear is that the state created a potential pool of 1 million-plus voters overnight. Some experts suggested that a new stream of Democratic voters might emerge from the referendum, called Amendment 4, but others doubted that one party would automatically benefit.

“I do think that Amendment 4 is going to transform Florida forever, but nobody really knows exactly how and when, because nobody has a good understanding of what the political leanings are of 1.4 million people who have completed all the terms of their sentences,” said Howard Simon, executive director of the American Civil Liberties Union of Florida.

During the past two decades, other states have enacted similar reforms, either through executive actions or ballot initiatives. Alabama reduced the kinds of crimes that could disqualify someone from voting, and California restored voting to people on probation. Maryland now allows people on probation and parole to vote, and the former Democratic governor of Virginia, Terry McAuliffe, restored voting rights to nearly 175,000 people.

Florida was one of just three remaining states — the others being Iowa and Kentucky — that prevented people with felony records from voting.

The change in Florida was long in the making. Crisscrossing the state with a message of redemption were volunteers from a broad coalition that included advocacy groups, Christian organizations, the League of Women Voters, criminal justice experts and, of course, those who had been convicted of felonies.

By successfully persuading Floridians to change the ban, the groups accomplished what a class-action lawsuit and various legislative attempts could not.

A key nonpartisan campaign point was the idea of second chances. Advocates released a series of videos — Ivey starred in one — that presented the state’s ban as unfair to taxpaying Floridians who had criminal records.

“We believe that when a debt is paid, it’s paid,” said Neil G. Volz, the political director of the Florida Rights Restoration Coalition. “People could unite behind that.”

Volz, a former Republican lobbyist, spoke of his own criminal record after being pleading guilty in the 2006 Jack Abramoff lobbying scandal.

Those who won the right to vote Tuesday said the change made them feel far more connected.

“Now I feel like a part of society,” said Clarence Office Jr., 61, a former addict with a long criminal record who has been out of trouble for a decade and is now getting his master’s degree in public administration. “I wanted to voice my opinion, but I couldn’t. It didn’t matter what I felt. Now it does.” Office works at the Department of Veterans Affairs in Miami, where he does outreach with military veterans accused of crimes. He said many veterans would return from war, get into a fight or become involved with drugs and suddenly find out they could no longer vote.

“They’d say, ‘I can serve my country, go fight in Vietnam, go to Afghanistan, risk my life, come here and get in trouble over marijuana, and even though I did all these other things right, I can’t vote.'”

Karen L. Leicht, 61, who served 28 months in federal prison for conspiracy to commit insurance fraud, said it was relatively easy for someone who has done a crime to be labeled a felon. She prefers to call them “returning citizens.”

“Any crime over $300 is a felony,” she said. “Three times with a suspended license and you’re a felon.”

Civil rights groups said the banning of those with criminal records was a legacy of the Jim Crow eras. Even now, they noted, black Floridians of voting age were disproportionately affected by the ban.

Leicht, who is white, joined the speaking circuit and filmed a video too. She said did so as part of a strategy to show Floridians that the ban affected people of all races. In fact, 70 percent of those convicted of felonies in the state are not African-American, Volz said.

“I would go speak to the Republican women’s groups and they would look at me and say, ‘It’s not fair you can’t vote!'” she said.

Richard A. Harrison, executive director of Floridians for a Sensible Voting Rights Policy, opposed the campaign with speaking engagements of his own. He criticized the measure because it replaced the previous state policy that allowed people with felony convictions to apply for clemency on a case-by-case basis. He feared that those with serious records would be serving on juries and running for office next.

“In Florida, felons were not allowed to vote historically because people who demonstrated a willingness to break the law shouldn’t be allowed to make the law for the rest of us,” said Harrison, a Tampa lawyer.

Myrna Pérez, the director of the Voting Rights and Elections Project at the Brennan Center for Justice at New York University, which filed a lawsuit against Florida’s voting ban 18 years ago, said the origins were a bit more sinister than that. The ban began right after the 15th Amendment to the U.S. Constitution forced Florida to give freed slaves the right to vote. The drafters of the state’s constitution looked to create loopholes.

Even with the new amendment, Florida still has among the strictest voting rules in the country because it excludes murderers and sex offenders. The new amendment will go into effect in January. Now, advocates will begin a campaign to get people to register.

“Florida is an outlier among outliers,” Pérez said. The ban was “so extreme and so contrary to the American understanding of second chances and being able to redeem yourself that people from all walks of life were able to point to it and say, ‘That doesn’t seem right.'”