'You never know': Man shot in foot during Raleigh road rage incident; other driver at large 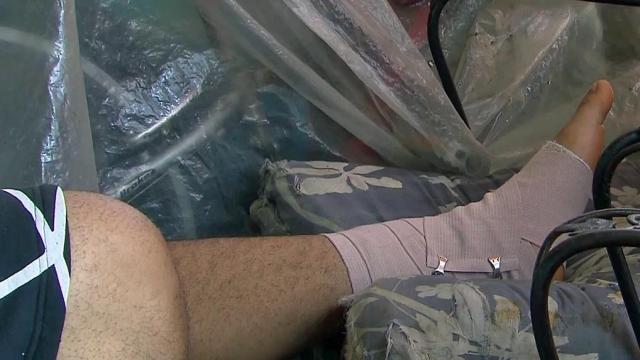 Raleigh, N.C. — A Raleigh 19-year-old, who did not want to be named, admits that emotion got the better of him Sunday morning, when he challenged another driver to what he described as a back-and-forth on Raleigh’s Western Boulevard. But the outcome – he was shot in the foot and the other driver remains at large – was more than he expected.

"I heard it when it went through my door. It was like a big boom," he said. "I heard the boom of the gunshot, and I felt when it went into my foot."

The bullet hit his left foot. He was able to pull into a Taco Bell drive-thru and asked for help.

He said he was picking someone up from work around 1:30 a.m. on Sunday when he got into a brief chase with another driver who cut him off.

He said the back-and-forth started when a car cut him off, then he pulled in front of the car and was involved in a short chase, which led to the shooting.

"You didn't have to shoot me," he said. "You could have just fussed me out or gave me the finger like normal people would. But by taking it to a gun level, that's a whole different extreme."

The victim is now out of work from his two restaurant jobs and on crutches.

"My foot is still sore. I still have two holes in my foot," he said.

Detectives are working with him to help identify a suspect.

"They are trying to search through traffic cameras to see if they can find anything," he said.

Regardless, he said he learned a valuable lesson.

The victim did not get a license plate number, but he believes the car was tan or gold. He said there were two people inside.

Anyone with information about the shooting is asked to call police.