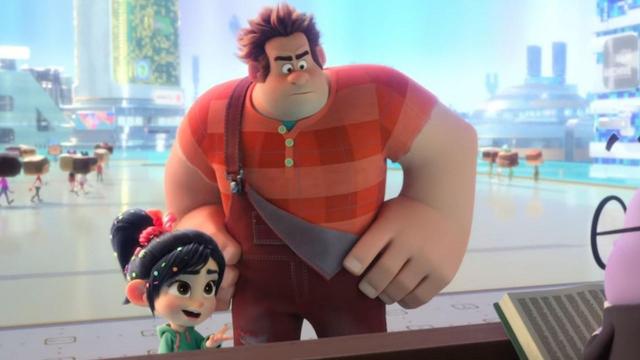 (CNN) — The "Wreck-It-Ralph" sequel is titled "Ralph Breaks the Internet," but the Disney franchise will break ground in virtual reality, too, as the first VR experience that the VOID has offered based on an animated property.

The 11-minute attraction, "Ralph Breaks VR," is much like the "Star Wars"-themed "Secrets of the Empire," or rival SPACES' "Terminator" battle. But the movie's genre reflects a desire to somewhat broaden the virtual-reality realm, which has thus far largely skewed toward young guys with its emphasis on shooter-themed heroics.

"Ralph" also takes advantage of that technology -- as teams of four players wear headsets and backpacks, placing them inside a virtual world -- but the projectiles here are pancakes and milkshakes (a gag that those who see the movie will understand).

One question is whether animation can expand the VR playing field by bringing in new consumers, including more kids. The "Ralph" attraction comes with a 48-inch height requirement, and a recommended age of 10 and up.

"It does have a broader range of people that would be interested. It's more family-oriented," said Shereif Fattouh, producer of the attraction for Lucasfilm's ILMxLAB, which was launched in 2015 to creative immersive experiences.

Transforming animation into virtual reality offers certain advantages, beginning with the fact that the basic environment already looks slightly unreal. The avatars for the players, for example, resemble cartoon characters. Approximating live-action fare, Fattouh said, is "always going to be a very hard bar to hit."

The VOID isn't the only VR entity experimenting with different niches. SPACES has teamed with National Geographic on a VR theatrical experience -- unlike "Terminator" or "Ralph Breaks VR," which are also walk-through attractions -- that's designed to be both exciting and educational.

Players in this relatively new medium are experimenting with a variety of wrinkles, in-home and out of home, but the meat of virtual reality remains action, much of it tied to popular movie franchises. The VOID has already announced plans for six virtual-reality collaborations with Disney, including a Marvel experience slated for next year -- when, conveniently, the studio will release the next "Avengers" sequel.

Curtis Hickman, the VOID's chief creative officer and co-founder, said "Star Wars" was always his dream project for virtual reality, but he also expressed enthusiasm about the possibilities associated with animation, noting that the key is for the visuals to be driven by the story.

As for taking people into this virtual version of the Internet, he said, "It feels like a place we've been, but we've never been."

"Ralph Breaks VR" is being offered at VOID Experience Centers. Tickets range from $29.95 to $36.95 and vary by location.