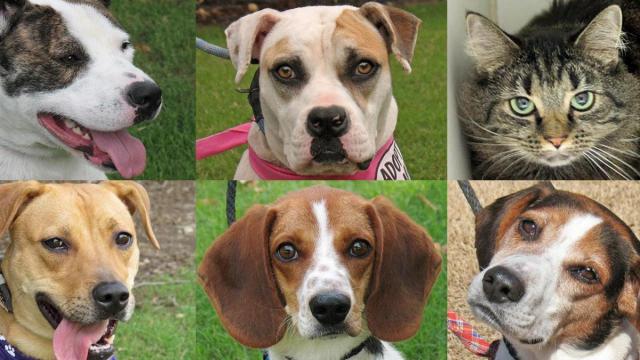 Since 2010, nearly 1,000 animals have been returned to the Wake County Animal Center in Raleigh, some as many as four times. Just like Grace, Max, Charlie and Xerox, each animal has a story, a reason it was returned.

Each time a pet is brought back, shelter employees ask the owner what went wrong and record the reason in a computer system. WRAL News reviewed five years of the shelter's logs, which are public record, and got a glimpse into the sometimes revolving door of animal adoption.

Shelter director Jennifer Federico examined some of the cases as well and often shook her head as she read through the files. "This one, this one killed me," she said, scrolling through the cases on her computer. "We had one person return an animal because it got too big. I'm like, 'We told you it was a Mastiff mix.'"

Some of the more common reasons people returned pets were because the animals didn't get along with the family or had too much energy, but others had more unique reasons:

"With returns, what frustrates me is, you didn't check with your apartment complex? Your landlord? Something?" Federico said. "Be responsible ... At the end of the day, we'd rather have the animals returned to us, but it's stressful for that animal to be here, to go home, be in a new environment two days, come back. I mean, you're disrupting that poor pet's life, and you could've just done your homework."

Pet owner: 'I couldn't imagine taking him back there' 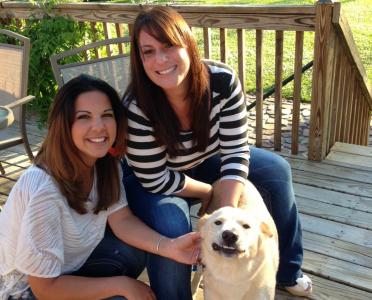 ALL SMILES: Marissa Piner, left, and her roommate Doria Zarfaty, right, adopted their dog Ace, formerly known as Freedo, after he was returned to the Wake County Animal Center four times. (Photo courtesy of Marissa Piner)

Roommates Marissa Piner and Doria Zarfaty did their homework before walking into the Wake County Animal Center in December 2012. They knew exactly what dog they wanted to see – a male German Shepherd named Freedo that they spotted on the shelter's website.

What they didn't know when looking at his profile online was that Freedo had been repeatedly returned to the shelter. Freedo and a collie named Jack hold the record for being returned the most times since 2010 – four times each.

Staff members broke the news to Piner and Zarfaty.

"They told us up front. It made us a little nervous. But when we saw his face, we were like, he has to get out of here," Piner said. "They said he needed someone taking a chance on him. They were pretty sure he had possibly been abused. They really wanted us to be patient with him. I couldn't imagine taking him back there."

Freedo soon joined the friends in their Raleigh apartment and was renamed "Ace" after one of Piner's favorite movies, "Ace Ventura." Despite his fun-loving name, the friends immediately noticed serious problems with their new 55-pound roommate.

On walks, Ace snarled at people who approached him. At home, he became aggressive and tried to bite friends who visited. Loud noises scared him so much he would pee himself. Even the sound of the dishwasher being emptied terrified him. He earned the nickname "Houdini" after escaping from his crate. When he failed to escape, he whined uncontrollably. 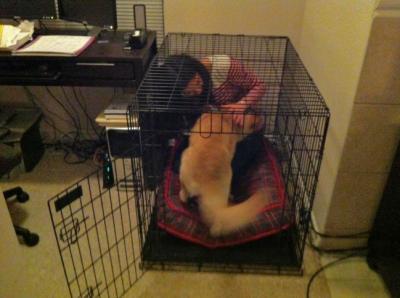 CRATE TRAINING: Marissa Piner climbs in the crate with Ace to try to make him feel more comfortable in his new environment. (Photo courtesy of Marissa Piner)

"Yeah, it's been a struggle," said Zarfaty, who says she initially wanted to adopt a small dog but decided to take Ace because he was "just so freaking cute." "He's very difficult, but I love him to death."

"There were a couple times we thought, 'We can't take him back there (to the shelter). Do we have any friends with a backyard?'" Piner said.

The roommates turned to dog trainers for help, some of whom suggested they put Ace down if he was biting people. Determined to keep him, the friends continued working on his behavior.

"He's calmed down a lot. I think I've learned to control him and control the situation more," Zarfaty said.

The friends have since moved into separate apartments and joke that Piner has visitation rights to see Ace, who lives with Zarfaty. They urge anyone thinking about adopting an animal to be prepared for problems.

"Make sure it's something you're 100 percent ready for," Piner said. "He will probably come with some issues. Be prepared to give that dog a chance. You can't just give it a week."

"Stick with it," Zarfaty added. "It's worth it when they snuggle up to you and cuddle at your feet." 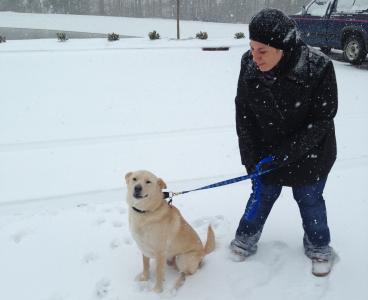 SNOW DAY: Doria Zarfaty and Ace enjoy the snow. Zarfaty had to be careful walking Ace because he often snarled at people who approached him. (Photo courtesy of Marissa Piner)

While Ace's story has a happy ending, it's not as clear what happened to Jack, the collie that tied the record for being returned the most times.

Shelter records show Jack was brought back four times in May 2010, mostly due to behavior and temperament issues. One adopter said he had "too much energy." One month later, in June 2010, Independent Animal Rescue in Durham took Jack. Where he went from there is unclear.

Denise Heflin, a program leader who has worked with Independent Animal Rescue since 2011, checked the organization's records but was unable to find a match of the microchip number listed for Jack in Wake shelter's records.

She found a dog named Jack that was adopted by a foster parent in 2010, but that foster parent is no longer in good standing with the organization, Heflin said. It's unclear if that dog is the same Jack that came from the Wake shelter.

Behavior expert: 'Take the cuteness with a grain of salt'

When the Wake shelter has a hard time placing pets or has animals that are returned multiple times, they sometimes turn to foster parents and rescue groups, like Independent Animal Rescue, for help.

"We are the avenue to adoption for a lot of dogs that otherwise would be overlooked or would not be on their best behavior at the shelter," Heflin said. "If (shelters) feel they have an adoptable animal that's getting overlooked, they'll call us."

Foster parents and rescue groups can take more time with adoptions and let potential parents get to know an animal better to make sure it's a good match.

"When they're coming out of the shelter, it takes them two to three weeks to decompress from my experience. About three weeks later, you're like, 'OK. I know who this dog is now,'" Heflin said. "(Shelters) don't necessarily screen people as carefully. They're probably a little less selective. We slow the process, do a meet and greet, home visit and trial period before they sign the contract." 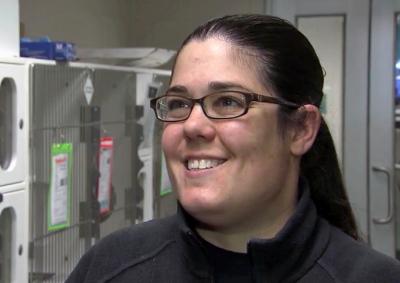 "We try to put healthy, behaviorally sound animals on our floor and get help from rescues who can screen and find appropriate homes."

"We try to put healthy, behaviorally sound animals on our floor and get help from rescues who can screen and find appropriate homes," she said. "We have foster homes that have very confident dogs in them. They go there, and they're like, 'Oh, this is how I'm supposed to behave? No problem.' In a couple weeks, they're back on our floor because they've figured out what they should be doing, and that's really positive."

Barbara Sherman, a clinical professor of veterinary behavior at North Carolina State University, says she is not surprised some adoptions don't work out. She compares the adjustment of welcoming a pet to getting used to a new roommate in college.

"The behavior is such an important factor of whether it's going to be a good match or not. You have to take the cuteness with a grain of salt," she said. "So many people walk down the row and say, 'That's cute.'"

Sherman suggests potential pet owners ask shelter staff about an animal's history before adopting it and pay attention to the information posted on the cage tag. If possible, go back to the shelter several times to interact with the pet.

Sherman says people often spend a few minutes at a shelter and say, "Oh, this seems like a really fun animal." Instead, she says, think long-term about whether that pet would be a good fit for the next 12 years or so.

"People's expectations are sometimes more optimistic. They're not always reality based," she said. "The lifestyle match is so important. It's so easy to get charmed by a particular pet."

Once you choose a pet and get it home, Sherman says, take your time and slowly expose it to different parts of the house, other pets and people to allow the animal to get its bearings. Use rewards and clear instructions to help the animal adjust and don't subject it to frightening or confusing situations.

"When you take an animal home, it's really a stranger in a strange land," Sherman said. "You can't imagine how disorienting it is."

Even for those who try to do the right thing and help a pet adjust, there's not always a happy ending. "Sometimes it's better to say, 'This isn't going to work for us,'" Sherman said.

While Wake shelter's records provide insight into why some adoptions fail, it's difficult to compare with other shelters locally and nationally because of the varying ways returned animals are handled.

The Wake shelter, for example, allows pets to be returned within three days for any reason for a full refund. However, the SPCA of Wake County allows 30 days for an animal to be brought back.

"If one agency defines them that way and another defines them differently, the stats will obviously not be comparable," said Darci vanderSlik, marketing manager at the SPCA of Wake County.

That's the problem Natalie DiGiacomo has encountered as director of shelter services for The Humane Society of the U.S. She can easily find statistics on euthanasia and adoption rates but says there is a lack of central reporting about why animals are returned.

"This topic in particular and looking at national statistics is very challenging ... Very few states even have reporting requirements," DiGiacomo said. "As a field, we are trying to standardize data collection so that we can know how far we've come and where we still need to go."

Note: The Wake County Animal Center, which provided this information, considers a pet returned if it is brought back within three days for any reason or within 21 days for medical reasons.

Note: The SPCA of Wake County, which provided this information, considers a pet returned if it is brought back within 30 days.

Until data collection can be better streamlined, local and national shelters are focusing their efforts on educating adopters so fewer animals are brought back.

"There are a variety of reasons pets are returned," said vanderSlik, with the Wake SPCA. "It breaks our hearts when it happens, but that is why we always sit down with our adopters to be sure they know what a commitment that a new puppy or kitten is before the pet is adopted."

At the Wake shelter, Federico says she urges visitors to talk with volunteers who help care for the animals. "Listen to the people we have on the floor. They know these animals," she said.