‘When You Think You’ve Got It Figured Out, It Flips’: Democrats Puzzle Over Retaking Ohio 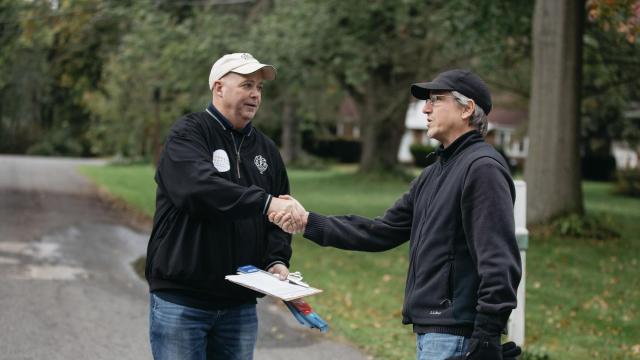 AKRON, Ohio — Richard Cordray never seems quite sure how to stand.

He tilts to the left like a Leaning Tower of Bureaucrat, arms sagging, as he waits for his turn at the microphone. When it comes, he speaks as if his internal keyboard lacks an exclamation point.

“I can feel — I can feel the blue wave coming,” Cordray, Ohio’s Democratic nominee for governor, said flatly here recently, greeting supporters inside a plumbers and pipe fitters union hall. He allowed that many had probably come to see someone else: Sen. Cory Booker of New Jersey, whose charisma had been imported for the morning rally.

“We’ve been telling the campaign, ‘Take the gloves off with this guy,'” said Jack Hefner, a local steelworkers union leader standing in the back, who has feared that Cordray would be a difficult sell with some members, many of whom unexpectedly supported President Donald Trump in 2016. “But Ohio’s a funny state. Right when you think you’ve got it figured out, it flips.”

For two years now, Democrats have had both goals in mind: figuring out Ohio, again, and flipping it. Few statewide results were more alarming to the party than Trump’s 8-point victory here — 1 point shy of his margin in Texas — reinforcing concerns that what was once a consummate purple state had shaded solidly red, taken with the president’s fiery zero-sum populism.

On the surface, then, there are two surprises about the Democratic effort to dig out: For one, their nominee atop the ticket, Cordray, is almost ostentatiously un-Trump, a progressive former federal regulator and “Jeopardy” champion running with the enthusiastic endorsement of Elizabeth Warren. For another, they actually believe they can win this time in the state’s top races — for the governorship, in a Senate contest and perhaps in a House battleground or two.

They are betting that a renewed focus on lunch-pail issues can reassemble their fractured coalition of city-dwelling liberals and minority voters, left-leaning suburbanites and especially white working-class voters hungering for an economic pitch aimed at their interests.

If only those blue-collar defectors of 2016 can be persuaded to listen.

“Every Democrat I know supported Trump,” David Vlosich, 50, a former local auto union official, said recently from his seat at a labor banquet in Girard, outside Youngstown. “Including half the people in this room.”

Trump won the county, Trumbull, by 6 points. Barack Obama won it by 23 in 2012. Vlosich was among the many who voted for both. He remains a Trump supporter, and plans to vote for Republicans this fall.

Perhaps the highest hurdle for Democrats here has been decades of near-domination by Ohio Republicans in nonpresidential cycles, with large conservative majorities in the legislature and control of the governorship for all but four of the last 28 years.

Polls have shown that a majority of Ohioans believe the state is on the right track. And while Gov. John R. Kasich’s role in the race has been complicated — his repeated clashes with Trump have often made him more popular with Democrats than with members of his own party — he plans to campaign this week with Mike DeWine, the state attorney general and Republican candidate for governor.

“Our electorate in midterm elections is more aligned with Republicans,” said Michael Hartley, a longtime adviser to Republican campaigns in Ohio, observing that Democrats appeared much better positioned this year in other Midwestern states that also voted for Trump, like Michigan and Wisconsin. “We’re kind of holding the line a little bit.”

Many Democrats seem undeterred in their optimism, confident they are buoyed by both local and national trends in a place where Trump has seen perhaps a slight slip in popularity since his election, if nowhere near the diminished standing he has suffered in some other states he flipped in 2016.

The president’s “America First” bravado on trade resonated deeply, aligning him more with some Democrats, including Sen. Sherrod Brown of Ohio, than fellow Republicans. But Trump is not on the ballot this year, and neither is Hillary Clinton. (A few Democrats in the state acknowledged that having two men in the marquee midterm races, Cordray and Brown, might help.)

Local Republicans have also slogged through a series of scandals in recent months, including the resignation of the House Speaker amid an FBI investigation, and the spectacular failure and alleged wide-scale fraud of a taxpayer-funded and Republican-backed online charter school.

Perhaps most relevant, Democrats believe they are starting to find their voice again with the sort of accessible economic message that Clinton struggled to convey — hamstrung by her association with trade deals like the North American Free Trade Agreement, which her husband signed, and her own ill-conceived remarks. (Clinton has said her biggest campaign regret came in Ohio, where she predicted that she would “put a lot of coal miners and coal companies out of business” in a more modern economy.)

“I think we talk more about workers, we talk more about labor, as a party,” Brown said in an interview. “I think we’ve been a better party on trade enforcement than we were.” Brown, the gravelly-voiced senator who opposes Trump on virtually every policy front except trade, is seen as something of a Democratic ideal for how to win in Ohio. He is expected to be re-elected easily against Rep. Jim Renacci, the Republican nominee, leaning on a down-home reputation as the state’s unpretentious emissary to Washington. One ad, titled “Disheveled,” simply ticks off semi-derisive adjectives that news reports have used to describe Brown’s appearance.

Traditionally, Democratic victory here has involved running up the score around Cleveland and other major population centers, particularly with nonwhite voters, while holding onto white working-class households in old-guard union towns with deep Democratic ties. The formula has become significantly trickier without Obama, who proved uniquely effective at turning out younger voters and African-Americans.

Despite Obama’s two wins in Ohio, it remains in many respects a culturally conservative state, where canvassers know not to door-knock on Sunday mornings during church — or to expect much success on Saturday afternoons during Buckeyes football games, either.

“Pray to end abortion,” read a sign displayed recently on a church yard in Akron — among the more liberal enclaves in the state — beside a cluster of white crosses pounded into the grass. The Supreme Court’s legalization of same-sex marriage in 2015 stemmed in part from an Ohio plaintiff’s challenge to a state constitutional amendment to ban such unions. DeWine’s office argued for the ban to be upheld.

David Betras, chairman of the Mahoning County Democratic Party, said liberal social causes “can’t be a centerplate issue'’ for Ohio Democrats, and preached a focus on pocketbook fare instead. “Most voters,” he said, “don’t give a whit one way or the other” about the former. (He did not say “whit.”) And it is in Betras’ region, along Ohio’s oxidized eastern edge, where Democrats were particularly disappointed in 2016.

The average Ohioan is older, whiter and less likely to be college educated than the average American, according to state statistics. And few areas have felt the economic sting like the Mahoning Valley, in the Northeast corner of the state, where several towns saw job and population losses over the past decade before drifting to Trump.

Statewide, there are signs of resurgence, potentially a boon to Republicans this year. The unemployment rate is below 5 percent, higher than the national average but much improved from its recession-era depths. Roughly 700,000 Ohioans are working in manufacturing, some 90,000 more than in 2009. Natural gas production — increasingly central to Ohio’s economy — has surged this year. Even the steel industry has a whiff of a rebound in some areas, following an announcement this year that an Indian steel giant might invest up to half a billion dollars in a struggling plant along the Ohio River.

In an interview, Cordray said the economic recovery had been uneven, elevating the importance of issues like jobs and health care. “I don’t think anybody owns Ohio voters,” he said. “They swing back and forth based on who they think is going to address problems and improve their lives, particularly on the economic anxieties that many of them feel.”

On health care, a defining issue for Democrats nationally, Cordray believes he is well-positioned: He has held up DeWine’s decision in 2011 to sign onto a Republican lawsuit against the Affordable Care Act as evidence that DeWine does not want to protect coverage for people with pre-existing conditions, one of the law’s core tenets.

Cordray has also repeatedly accused DeWine of changing positions on the expansion of Medicaid, a signature policy decision of Kasich, who has cut an ad defending his Republican colleague. "Mike DeWine has promised me he will protect those with pre-existing conditions,” the governor says in the spot.

DeWine has presented Cordray as a do-nothing Democrat out of step with the state, lashing him for supporting a constitutional amendment that would reduce penalties for some drug users.

“You’re all talk,” DeWine said at a debate in Dayton. “You’ve been a failure at every job you have ever had.”

But generally, the race has been relatively tame, with two stylistically equivalent candidates who can benefit at times from the well-founded impression that they are boring. DeWine’s pre-Trump establishment background as a well-known state official could mollify suburban voters uncomfortable with the president’s more unruly instincts. And Cordray’s meek manner can imply a centrism that belies much of his policy platform.

At Cordray’s rally with Booker, Jenna Gravalis, 23, stood watch in a “Nerds for Cordray” T-shirt. “Us nerds are very excited,” she said.

But some veteran labor organizers are wary, acutely aware that their members have little visceral connection to the man they are being asked to support.

“He’s not Sherrod Brown,” Hefner, from the steelworkers union, said of Cordray, in an office that includes two pictures of himself with former Vice President Joe Biden. It was no coincidence that Cordray’s team called upon Biden for a joint appearance this week in Youngstown. Further down the ballot, Democrats are hoping for a breakthrough in the right-leaning 12th Congressional District — winding from the affluent Columbus suburbs to the Appalachian county of Muskingum — which has not elected a Democrat since 1980. It nearly happened, though, in a special election last summer, when Danny O’Connor, a 31-year-old lawyer and local official, lost by about 1,700 votes to Troy Balderson, then a state senator. (The two face off again on Election Day.)

“This is the wealthiest district in the state of Ohio; this district also has industrial towns like Mansfield, Ohio, that our country has forgotten,'’ O’Connor said. “This district is this country.”

And so is this state, at present: anxious, complicated and controlled by Republicans.

He came upon David Lashchuk, 48, and his son Hunter, 12, tossing a Frisbee. “Do you have any Girl Scout Cookies?” Hunter asked, requesting sugar-free. “If not, we’re not interested.”

But Lashchuk, a tarp manufacturer, lingered to listen. “I think Corduroy’s got a real vision,” he said, inventing a more memorable pronunciation while praising the candidate’s emphasis on infrastructure, a potential boost to business. “If they’re not fixing bridges, I’m not putting tarps on them.”

A short walk away, Brode approached Michael Birch, 39, perched on a roof grinding sandstone for a chimney repair. Was he interested in hearing about some fine folks running for office?

“Are they Republicans?” asked Birch, a union bricklayer. No? Then he was not interested.

Brode turned to leave, brushing past a truck with a sticker on the back window: “Making America great again,” it read, “one brick at a time.”