Raleigh, N.C. — Survivors gathered at a Raleigh vigil Thursday night to raise awareness about resources needed for people who have lost a loved one due to homicide.

The vigil comes during Survivors of Homicide Victims Awareness Month, which continues until Dec. 20.

The Puryear family joined those gathered on the State Capitol Grounds for the candlelight vigil.

In November of 2014, they lost their daughter Britny to domestic violence.

"It never gets easier, especially now at the holidays," Stephen Puryear said. "It's good to be around people like this because we're all in a group no one wants to be in, and we're the only ones that know what they're going through."

The vigil remembers them and lends support to surviving family members.

Freida MacDonald's son, Stephen Curtis Hoyle, was shot and killed four weeks after he turned 24 in 2012.

"Christmas is always very hard for me," MacDonald said. 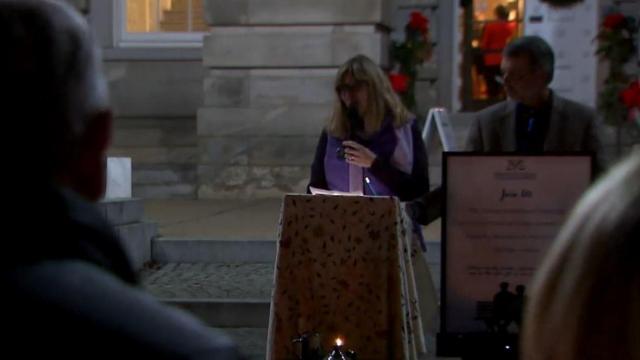 MacDonald and others are using vigils like this to bring awareness to the lack of resources for people coping with the murder of a loved one.

She says group sessions got her through one of the most difficult periods of her life.

"It helped me in a sense that I could share my story with someone who understood completely what I was going through," MacDonald said.

"Once you lose someone, they're always with you, and the pain is always there, but doing advocacy and working with families makes it better for me," Perry said.

Perry and others were able to call out the names of loved ones they've lost during the vigil, to which everyone responded, 'We remember.'

The North Carolina Victims Assistance Network, the organization that put on the vigil, offers some resources for survivors.