‘We’re Sending Them the Hell Back,’ Trump Says of Securing the Country’s Borders 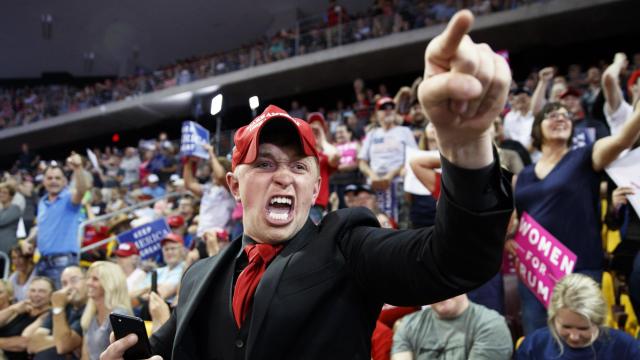 DULUTH, Minn. — Shortly after caving to political pressure and signing an executive order that ends the separation of families by detaining parents and children together at the border, President Donald Trump vowed at a rally here Wednesday that his administration would be “just as tough” on immigration as before.

The president was here in part to support Pete Stauber, a Republican candidate for a House seat. But, as he usually does on the campaign trail, Trump focused more on his agenda — and his enemies, at one point declaring that he had “a much better apartment” than his critics.

“The Democrats want open borders: ‘Let everybody pour in, we don’t care,'” he said, as the crowd erupted into a chant of “Build the Wall,” and mocked a handful of people who tried to protest his policy. (“Go home to your mom,” the president told at least one demonstrator.)

He said of other countries: “They’re not sending their finest. We’re sending them the hell back. That’s what we’re doing.”

Trump traveled to Duluth, a shipping town on the shores of Lake Superior, after a week in Washington in which criticism over his child-separation policy had reached a fever pitch.

Fleeing a dizzying debate back home, Trump relished in a friendly crowd and turned his attention to the midterm battle that awaits Republicans here: Minnesota is perhaps one of the most important states in the fight for control of Congress, and the president is arriving in what is one of the few House districts in the country that Republicans have a chance to flip.

“I hate to bring this up, but we came this close to winning the state of Minnesota,” Trump said of the 2016 election, which he mentioned repeatedly. He promised that, if his supporters could help tip the political balance in his favor in the fall, “we will have the greatest borders, the greatest walls.”

“We’ve already started,” Trump said, “but it’s a lot tougher than it needs to be.”

Trump’s trip was his first as president to Minnesota, a state he lost by just 44,000 votes in the 2016 election despite barely campaigning here. No Republican presidential candidate has carried the state since Richard M. Nixon’s landslide re-election in 1972, and Trump is eager to compete here in 2020.

In the 9,000-capacity arena, which was nearly filled, supporters got the midterm and 2020 message loud and clear — it was repeated by candidates, lawmakers and Trump family members.

“The Democrats are desperate,” Lara Trump, the president’s daughter-in-law, said as she riled up the crowd. “They sure as heck don’t know what to do in 2020, do they?”

Ann Marie Cosgrove, a 60-year-old who works in education, traveled here from the Minneapolis area with over a dozen friends. A onetime Democrat, Cosgrove said they were fixated on helping “turn Minnesota red” because the president had promised to secure the borders and was tamping down on abortion rights.

“I’d rather be with a man like Trump,” Cosgrove said.

The midterm elections here could go a long way toward demonstrating how realistic Trump’s prospects in 2020 are for a party that has not won a statewide election in 12 years. And perhaps nobody may have been more excited about Trump’s visit than Stauber, who unexpectedly received a call on his cellphone from the president this year.

“He said, ‘What can I do to help you win?’ And I said: ‘Mr. President, it would be helpful if you came up to the district to see the treasure we have here,'” Stauber recalled.

A former Duluth police officer, Stauber said Democrats were increasingly out of favor in an area with a rich tradition of mining. “The intensity and support for President Trump is as good if not better than it was on election night,” he said.

That intensity was present Wednesday night, as the crowd joined the president in jeering the news media, Hillary Clinton and Democrats. They supported his efforts on North Korea — “You know what I gave away? A meeting!” Trump yelled — and his order this week to build a space-focused branch of the military.

“Space Force!” Trump shouted after declaring that he was reopening NASA, which is not closed.

The president said Stauber could help deliver on the promises Republicans have made on trade, immigration and the economy.

“He’s going to do fantastically,” the president added.

But in an indication of how Trump’s mélange of policies can complicate the lives of Midwestern Republicans, Stauber said that while voters connected to the mines applauded the president’s steel tariffs, the farm-heavy, western half of the district was uneasy about the fate of their agricultural exports.

Trump’s decision to visit Duluth speaks to the divergent nature of the president’s standing in the state.

Even as Republicans make gains with blue-collar voters, they face considerable headwinds in the suburbs whose voters recoil at Trump’s incendiary style. That is partly why the president came here rather than the more populous Twin Cities, where Republicans are defending a pair of seats in the Minneapolis suburbs where Trump is far less popular.

But on Wednesday, people came from that area of the state to hear the president speak. Wearing a shirt with the word “Winning” in capital letters, Kari Wiessner, who works part time, drove from the suburb of Eden Prairie.

She was among several Trump supporters who questioned whether the footage, photographs and audio of families separated at the border were doctored or disproved.

“They’re able to vote and turn our state against us,” Wiessner said of the state’s immigrant population, “and wash our state away.”