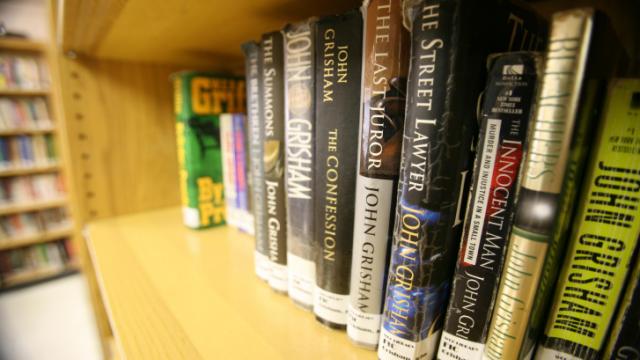 Raleigh, N.C. — Mike Hoffman grabbed a copy of one of his favorite books, "American Gods" by Neil Gaiman, and placed it among a pile of donations to be mailed to prisoners. Hopefully, the University of North Carolina at Chapel Hill junior thought, his favorite modern fantasy science fiction book could find its way to an inmate and bring some comfort.

Getting Hoffman's book to one of the nearly 37,000 inmates in North Carolina's 61 state prisons is a complicated process. Prison staff inspects each publication to catch contraband and prohibited content, such as pornography and violent material. Prison policy allows staff to withhold books, magazines, newsletters and other items from prisoners for 17 different reasons.

Q&A: How do North Carolina inmates get publications?

When inmates are denied reading material, they can appeal to a five-member panel – the Publication Review Committee – which has the final say. Last year, the committee rejected more than 600 books, magazines and other publications.

Quiz: Would you allow or deny these books in prison?

WRAL News filed a public records request to get a list of the rejected publications, authors and reasons why they were denied. Many of the banned items included sexual references or nude photos, according to the reviewers' comments:

Other books and magazines were denied for different reasons, according to the reviewers' comments:

North Carolina's inmate publication policy has existed since the early 1970s, but it was changed in 2010 after inmates filed a class-action lawsuit against the state Department of Correction, alleging that their First Amendment rights were violated when prison staff denied them reading material.

The state settled and agreed to allow inmates to challenge disapprovals. The state also acknowledged that "policies and procedures governing inmate publications were not consistently enforced in the past" and agreed to do a better job of following the policy and training staff once a year to create consistency among prisons, according to the settlement agreement.

"We've had on-site classroom courses offered at different correctional facilities going all the way back to 1975. We've never run into a problem on a textbook being turned down."

Michele Luecking-Sunman, a civil litigation managing attorney at North Carolina Prisoner Legal Services, was one of the attorneys who represented the inmates and says the settlement has "solved a lot of issues."

"I believe (North Carolina prisons) are doing a fairly good job on the whole," she said. "The ability to have books in prison is really important. It's also important in terms of rehabilitation and being a productive person as far as doing time."

Brick Oettinger has spent his career using books and education to try to rehabilitate North Carolina's prisoners. For nearly the past four decades, he has helped bring tuition-free university courses and educational services to inmates through the UNC-Chapel Hill’s Friday Center for Continuing Education, where he works as associate director for correctional education.

"We’ve had on-site classroom courses offered at different correctional facilities going all the way back to 1975. We’ve never run into a problem on a textbook being turned down," Oettinger said. "We actually have had four (prisoners) who went from having no college credits when they began our program in the correctional system to, ultimately after getting out of prison, getting PhDs."

Publisher: 'If we have a problem, we appeal it'

Publishers can also appeal to the Publication Review Committee when their book, magazine or newsletter is denied. Prison policy says publishers must be notified and given 15 days to file an appeal. Last year, publishers filed 10 appeals, three of which were granted, according to prison records.

In December, Publication Review Committee Chairwoman Fay Lassiter sent a letter to the Human Kindness Foundation in Durham to say that its 2013 Christmas newsletter had been banned because it included a letter from an inmate who supported violence against another inmate. The inmate's letter said, in part:

Dear Bo,
... This man is 2 cells away from the guy who beat his MOMMA to (expletive) death with a (expletive) baseball bat! He saw his momma’s eyes roll to the back of her head ... This guy needs to get a shank and take this (expletive) off the count! ... I’m mad! Man, I hope that nobody does that to my mom or dad. I’ll kill em! ...
- Later, D

Human Kindness Foundation founder Bo Lozoff, whom the inmate was addressing, responded in the newsletter:

Dear D,
I appreciate the honesty and friendship in your letter ... One of the worst things a human being can do is to kill another human being on purpose no matter who started it, what the circumstances were, whether there was any choice or not, etc. It’s a tragic thing to do and has unpredictable consequences inside the mind and heart of the killer ...
- Love, Bo

In her letter to the Human Kindness Foundation, Lassiter said the newsletter was banned because it "could be detrimental to the security and good order of the prison facility and the rehabilitation of inmates."

Q&A: How do inmates get publications?

Catherine Miller, co-director of the foundation, appealed the decision, saying the newsletter could "help reduce violence in prisons, not by avoiding the mention of such violence, but by discouraging it in a powerful way."

A month later, the North Carolina Department of Public Safety overturned the denial and allowed the group to resend the newsletter.

"If we have a problem, we appeal it," Miller told WRAL News. "So far, at least, we have found (North Carolina prisons) to be very reasonable."

Miller says the group mails about 300 to 400 packages of books to prisoners across the country each week. They also send a newsletter three times a year to about 40,000 inmates on their mailing list.

"Our books are all about taking personal responsibility for your life," Miller said. "We challenge people to calm down and use some classic spiritual practices."

UNC student: 'Their most requested book is the dictionary'

A book's subject material is not the only thing prison staff take into consideration when deciding whether to allow or deny a book. The size of a book can be a problem, too, according to Department of Public Safety spokesman Keith Acree.

"The prohibition on large hardback books was a result of inmates using large, heavy books to assault others," Acree wrote in an email to WRAL News.

That's why the Prison Books Collective in Chapel Hill, which describes itself as an "anti-prison group," asks people to donate paperback books for prisoners.

Since 2006, the group has gotten together every week "to open prisoners’ letters, read their requests, and search through our library to find the books they want," according to the group's website. "We send a wide range of texts, ranging from dictionaries and GED study guides to Grisham novels, Greek philosophy to radical history."

A WRAL reporter asked to speak with a member of the Prison Books Collective and observe one of the group's book collections for prisoners, but a spokeswoman said the group was not interested in participating in the story.

"They're very cautious because they are a radical group," said Mike Hoffman, a UNC junior who donated one of his favorite books, "American Gods" by Neil Gaiman, to the group. He and other students in UNC's Students of the World group were granted access to the Prison Books Collective in February to document its work sending books to prisoners.

"We came out, we did video interviews," Hoffman said. "They have thousands of books. They get them donated. They get books from organizations ... Their most requested book is the dictionary."

Hoffman says he watched the group's volunteers sit around tables one Sunday, reading through prisoners' letters and talking about "the entire spectrum of social issues."

"I was happy to see people putting their time into help, into addressing this issue," he said. "People that are incarcerated are largely not trying to waste away their time within prison. They need opportunities to educate themselves, to develop skills, to maybe even get college credit, which a number of them do. They can't do that without resources. There's this mindset that anybody that's in prison is a lost cause, but that's not going to help anything at all."

Hoffman says he and others in UNC's Students of the World group hope to "draw attention to groups that are doing good work." In the meantime, he hopes his book donation, "American Gods," is delivered to a prisoner and brings that person some peace.

So far, Hoffman's book has not appeared on the rejected list, according to Department of Public Safety officials.

Take our quiz: Would you allow or deny these books in prison?