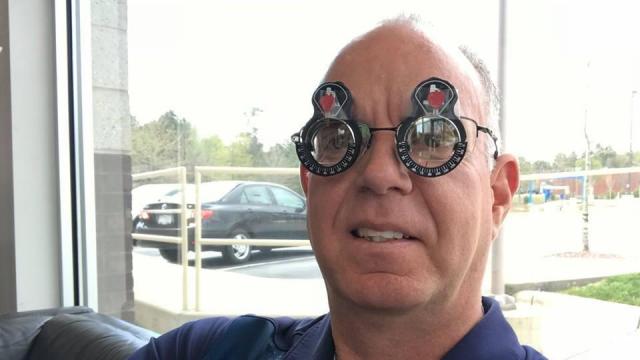 Raleigh, N.C. — WRAL meteorologist Mike Maze is opening up about how Google helped him reach a life-changing diagnosis and relief from dizziness, anxiety and panic attacks, even during newscasts.

After first experiencing vertigo symptoms in 2010, Maze was finally diagnosed in March with Vertical Heterophoria and Binocular Vision Dis, a misalignment of the eye muscles that can cause dizziness, anxiety and headaches.

Before being diagnosed, Maze changed his diet, cutting out all dairy and gluten. But his symptoms persisted and began to get worse. He began running into walls and couldn't drive.

In February, during WRAL's live Winter Olympics coverage, Maze said the dizziness from the studio's lights triggered a panic attack.

The diagnosis finally came after Maze Googled, "Why can't I drive on the interstate at night?," which led to an online video testimonial.

“I have found tremendous relief since I was diagnosed in March," Maze said. "I have been wearing my new glasses since March 10 and am 90-percent better. I am awaiting a new prescription that should arrive any day now which should eliminate all symptoms. I am hopeful I will put this issue behind me with the second set of glasses. Sometimes people will need a third or fourth update. I am hoping my second update will be enough.”