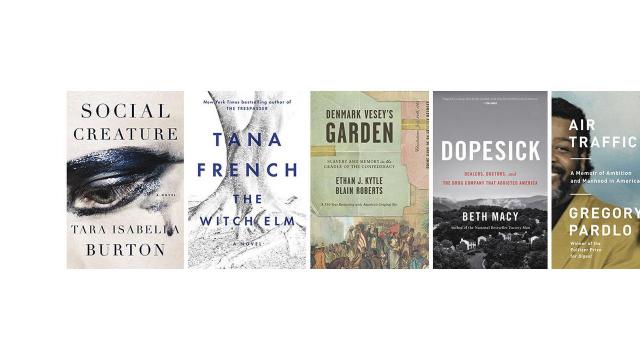 The books on this list are limited to ones I mentioned in print this year. I spent much of my reviewing space on books that were tempting to cover for reasons other than their merit (e.g., “Who Is Michael Ovitz?”). Old habits die hard.

Some of these five, like “The Witch Elm,” got abundant attention. I reviewed it for The Times in full; someone named Stephen King did, too. Others come from my summer reading list and never took off the way I thought they would. “Social Creature” and “Denmark Vesey’s Garden” deserve a second chance.

‘SOCIAL CREATURE’ By Tara Isabella Burton (Doubleday). Why wasn’t this the thriller of the summer? It was for me. Confusing title? Quiet cover? Nobody to like? Who did you like in “Gone Girl”? There’s a lot of glamorous New York nightclub depravity here, too, and that never hurt a good crime book. In fact, this one’s most darkly hilarious scene involves a demise in a club so murky that it’s hard to tell the living from the dead. The plot involves a beautiful heiress who virtually enslaves an awe-struck, impoverished acolyte — to the point where the two become doppelgängers and social media enters the mix. This is where the mischief starts. Suffice it to say that Burton knows her way around good, evil and the eternally reader-friendly realm in between. When she writes another installment, she would be wise to keep her own eccentric image — unhelpful, and highly visible during the book’s launch — from overshadowing those of her characters.

‘THE WITCH ELM’ By Tana French (Viking). The bar is high, but this is French’s best book. Her most intricately nuanced novel yet, it begins with a scene that should set off alarm bells in the mind of any reader. Its arrogant main character, a young man named Toby Hennessy, tells us that he has always considered himself a lucky person. Cut to bad luck, to a Toby irreparably damaged, and to a body and memory on which he can no longer rely. When Toby is forced to give up city life and retreat to a more rustic family manse, French can play to her full strengths: family, memory, identity and, of course, crime. What went wrong here when Toby was young? What’s wrong in the present? He knows ... and yet he doesn’t. But he will. It’s an immense pleasure to be in French’s expert hands and to follow Toby’s bewilderment. Note: It’s a stand-alone. No Dublin Murder Squad this time.

‘DENMARK VESEY’S GARDEN: SLAVERY AND MEMORY IN THE CRADLE OF THE CONFEDERACY’ By Ethan J. Kytle and Blain Roberts (The New Press). This groundbreaking exploration of the history of memory is essential reading about race and the Civil War. It focuses on Charleston, South Carolina: its known past, its mythmaking about same, the competing factions there who have even tailored different accounts of slavery to what different groups of tourists want to hear. The authors make it clear that these issues still roil our present by starting with Dylann Roof’s 2015 massacre of nine black parishioners at Emanuel African Methodist Episcopal Church and the distortions about slavery that fueled his hatred. Denmark Vesey was a co-founder of that same church, a freed slave executed in 1822 for allegedly plotting to lead a slave revolt.

‘DOPESICK: DEALERS, DOCTORS, AND THE DRUG COMPANY THAT ADDICTED AMERICA’ By Beth Macy (Little, Brown and Company). When Macy was a Roanoke, Virginia-based reporter doing the legwork for her book “Factory Man” (2014), she saw the prevalence of joblessness and disability in Appalachian factory towns where the work had dried up and despair had set in. In “Dopesick,” she mentions a high school kid whose ambition was to be a “drawer,” as in draw-er of disability checks. It took her a while to make the connection between that hopelessness and OxyContin addiction, and she now attacks that subject with a vengeance. “Dopesick” pinpoints Appalachia as the birthplace of the epidemic and the Route 81 corridor — a quick way from the Appalachians to Pennsylvania, expediting a trip to New York — as the means by which it spread. Socioeconomically, she examines how so-called hillbilly heroin could go unnoticed in prosperous suburbs where it was no less lethal. Like “Factory Man,” this book is comprehensive, compassionate and forceful. No matter what you already know about the opioid crisis, its toughness and intimacy make it a must.

‘AIR TRAFFIC: A MEMOIR OF AMBITION AND MANHOOD IN AMERICA’ By Gregory Pardlo (Alfred A. Knopf). It isn’t surprising that a Pulitzer Prize-winning poet’s memoir is marvelously written. But this one is breathtaking in both style and substance. The author grew up with a father who had been an air traffic controller until, in 1981, the controllers’ union was broken. The father then took an addict and gambler’s try-anything approach to the future and left his son a lot to contemplate and describe. Pardlo vibrantly captures the adventure in his father’s life and his own in this lively, freewheeling and richly anecdotal memoir.

Bonus Ancient Rock History Twofer: Ryan H. Walsh’s “Astral Weeks” and Joe Hagan’s “Sticky Fingers.” Though the latter came out last year, these two intertwined books will mesmerize anyone interested in 1968, that staggering musical year. Walsh’s book explores the phenomenal confluence of events that led to the making of Van Morrison’s seminal album “Astral Weeks,” an oddly Boston-related phenomenon now celebrating its 50th anniversary. The best part of Hagan’s book about Jann Wenner and the rise and fall of Rolling Stone thrums with the urgency of that pivotal year, too.