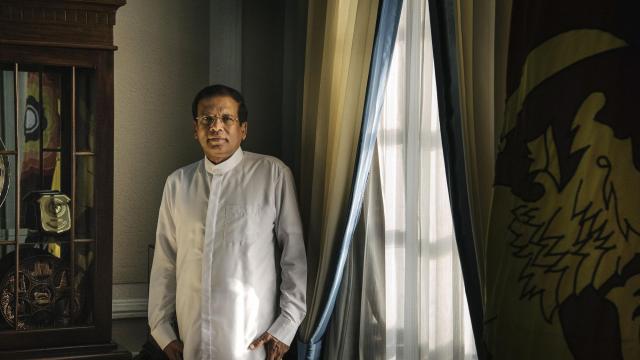 When Sri Lanka’s president was elected in 2015, he was given a sweeping mandate from voters to investigate accusations of war crimes and graft against his predecessor’s government and to cancel deals with China that had plunged the country into debt.

Now the president, Maithripala Sirisena, has become an agent of the attempted comeback of the man he replaced, Mahinda Rajapaksa.

Sirisena has unilaterally suspended Parliament and the Cabinet and declared that Rajapaksa would immediately become the new prime minister.

The Parliament and public that once rallied around Sirisena are now bitterly divided over what his critics call an unconstitutional attempt to consolidate power.

The country is split down the middle, with parliamentarians slightly tilted toward Prime Minister Ranil Wickremesinghe, who is standing his ground despite attempts to replace him with Rajapaksa.

Sri Lanka, one of Asia’s oldest democracies, has now been left with two prime ministers claiming legitimacy and concerns that violence might be used to break the stalemate.

Though the current crisis appeared to have been at least partly caused by bitter personal differences between the leaders, it has geopolitical importance. India and China have been locked in an expensive competition for influence in Sri Lanka, and Rajapaksa’s allies blame his 2015 election defeat on meddling from New Delhi. India denies the allegations.

Wickremesinghe said that any legitimate confidence vote in Parliament would confirm that he still had the votes to remain in office. “I am confident that I am the only one who can get a majority. If someone else can show a majority, I will give way,” Wickremesinghe said in a news conference Monday.

The president’s move to consolidate power and invite Rajapaksa back into government starkly counters the promises he made to investigate the former government’s actions during the country’s long civil war. During his 10 years in power, Rajapaksa and his government were accused of rights violations in the endgame of the war against Tamil Tiger separatists. Opposition politicians, aid workers and journalists routinely disappeared, many found dead.

During his campaign in 2015, Sirisena used the image of journalist and cartoonist Prageeth Eknaligoda, who had been critical of Rajapaksa and disappeared in 2010, as a symbol of Rajapaksa’s tenure.

“When we walked the streets for Mr. Sirisena, we walked against the politics of fear and repression. Today, the same Mr. Sirisena is bringing the man who terrorized us back to power,” she said.

“The fear is coming back.”

The crisis appears to be the first unconstitutional transfer of power in Sri Lanka’s independent history.

“We are working as a caretaker government to prepare for elections next year,” said Namal Rajapaksa, Mahinda Rajapaksa’s son and a parliamentarian. Wickremesinghe’s government, he said, had “delayed elections for three years and that was unconstitutional, and no one said anything.” Wickremesinghe is currently hunkered down in his residence with hundreds of supporters and Buddhist monks surrounding the building, complicating Sirisena’s ability to oust him without a bloody showdown. The president is in charge of the armed forces and it remains unclear where they stand in the crisis.

Violence broke out Sunday evening when the petroleum minister approached his ministry and was confronted by Rajapaksa’s loyalists who prevented him from entering. As a crowd formed, the minister’s bodyguard opened fire, killing one person. The minister, Arjuna Ranatunga, formerly a world-famous cricket player, was arrested Monday.

Over the weekend, a mob loyal to Rajapaksa stormed the state television broadcaster and took it off air. Some journalists say they have gotten threatening calls to support Sirisena’s government.

From the beginning, it seems Sirisena miscalculated how much support he could rally to oust Wickremesinghe.

On Friday evening, Sirisena called members of his parliamentary bloc and representatives of the military to his residence for a meeting, which many assumed would be on policy matters, according to two officials familiar with the matter.

Instead they entered Sirisena’s residence to find Rajapaksa and a hastily arranged swearing-in ceremony to appoint the former leader as the new prime minister. By Saturday afternoon, parliamentarians loyal to Wickremesinghe refused to defect to Sirisena’s new coalition, and even some members of the president’s own party declined to cross over.

In a national speech Sunday evening, Sirisena claimed that a Cabinet minister he did not identify had been hatching a plot to assassinate him. The claim came weeks after The Hindu, a major Indian daily, reported that Sirisena had told allies that India’s intelligence agency was also planning to assassinate him. Sirisena later denied that report.

Sirisena also harshly criticized Wickremesinghe, his coalition partner of the last three years, calling him “arrogant, stubborn and inflexible” and saying the prime minister had stalled economic reforms while allowing corruption to flourish. He had no choice but to appoint Rajapaksa, he said, “for the sake of the motherland.”

On Monday evening, Rajapaksa swore in a Cabinet, appointing himself as finance minister in addition to his prime ministerial posting, all while the legitimacy of the change remains unclear.

During Rajapaksa’s rule, China found an opening to pull Sri Lanka more closely into its orbit through billions of dollars in loans, some for the ruling family’s pet projects. The projects and the debt they accumulated became an election issue in 2015, with Sirisena and Wickremesinghe cooperating to run on an anti-China platform.

But once they came to power, they realized that India and the United States — which had also been critical of Rajapaksa’s rule — did not have China’s deep pockets and began to gravitate toward Beijing once again.

China has been nimble in its diplomacy, too. Shortly after Sirisena came to power, China’s government built a hospital in his home district. After a public uproar over the Hambantota port this year, China gave Sirisena a grant worth nearly $300 million, which the president boasted was for “any project of my wish.”

Western governments have rallied around Wickremesinghe in the crisis, and the loans and grants they have given this government in recent years may be at risk unless the prime minister is restored. But that money pales in comparison to the loans China has provided.

“The political turmoil, more than Rajapaksa’s return to power, works to China’s advantage. In country after country, China has exploited internal disarray to advance its objectives,” said Brahma Chellaney, an analyst and critic of China who often advises the Indian government and is affiliated with the Center for Policy Research in New Delhi. China’s ambassador to Sri Lanka quickly sought to show he was not taking sides, posing for photo opportunities with Rajapaksa and Wickremesinghe on Saturday.

Parliament is set to reconvene Nov. 16, but there is concern that the delay may be used to coerce lawmakers to support Sirisena and Rajapaksa. Namal Rajapaksa, the parliamentarian, says his party and Sirisena’s already have the support they need.

The leaders quarreled at every step and the government was paralyzed, unable to fulfill its economic or social promises. And they never held the accountability crusade they had promised, to investigate the alleged war crimes of Rajapaksa’s government.

“This government came in and made commitments to deliver on transitional justice, to deliver truth justice and reparations for Sri Lanka’s conflict,” said Omar Waraich, Deputy South Asia director for Amnesty International. “While there were some very important gains made, that process stalled, disappointing the families of victims. There is a danger now that even those limited gains will be reversed.”