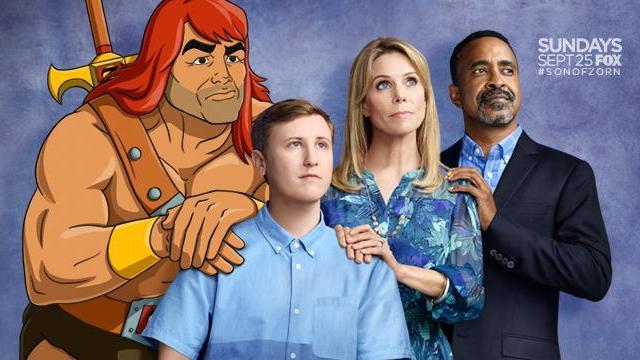 Hollywood, Calif. — "Son of Zorn," a new comedy about an animated warrior who re-enters a world filled with real people, premieres Sunday evening on FOX.

The comedy/action hybrid tells the story of Zorn, a man on a quest to win back his ex-wife and son. There's one catch, though - Zorn is an animated character, while his ex-wife (Cheryl Hines from "Curb Your Enthusiasm") and his son are live-action.

Zorn, voiced by Jason Sudeikis ("Horrible Bosses"), is a light-hearted hero who returns to California to rent an apartment and take on a sales job after fighting countless epic battles.

Show officials call the "animation meets real people" combination unique, and the stars of the new series say the idea took some getting used to.

"I was very confused [the first time I was handed the script]," said Hines. "It was hard to understand what they meant when they said Zorn is animated and the rest of you are not."

In an off-set interview, star Tim Meadows (who plays Craig, the man engaged to Zorn's ex-wife) explained the challenge of acting with an imaginary character.

"I was starting from zero," he said. "I knew it was going to be up to me to help develop who this guy was going to be eventually. When I'm at home learning my lines, I'm talking to nobody, and that's all I am doing on this show is just talking to an 'X' or a light stand or the corner of a wall or something. You just have to act on it."

"We have a lot of fun," added Hines. "We sort of get to improvise a little bit, because the animation is last, so whatever we do they can animate to match it."