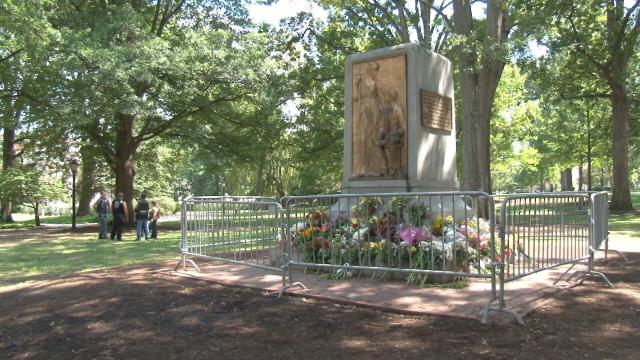 Chapel Hill, N.C. — There was a show of support surrounding the “Silent Sam” monument Saturday, as dozens of flower bouquets were placed around the pedestal of the Confederate statue on the University of North Carolina at Chapel Hill campus.

Protesters tore down the “Silent Sam” statue on Aug. 20 and only the pedestal remains on campus as university officials work to determine the statue’s future.

Flowers that surrounded the statue on Saturday had been donated from around the country.

“Every Saturday people are bring out their flowers in memorial from Silent Sam. We came all the way from Fayetteville just to ride out here and show our support and give our respect,” John Tuzzio said. “This is history and people are trying to change history, it’s in the past you’ve got to respect it.”

UNC Chancellor Carol Folt said earlier this week that the “Silent Sam” statue has a place in the university’s history and on campus, but perhaps not in the prominent place it once stood.

UNC chancellor: 'Silent Sam's' place is 'not at the front door' of the university

The “Silent Sam” statue has been in storage since it was toppled last week and the UNC Board of Governors have given Folt and the UNC-Chapel Hill Board of Trustees until Nov. 15 to devise a plan for its fate.

As the Board of Trustees works to decide the statue’s fate, more than 340 faculty members have signed their name to a letter to Folt and the provost, asking that “Silent Sam” not return to campus. The letter says the statue memorializes racism and asks Folt and the provost to demonstrate that they will not endorse or support white supremacy.

Students on campus Saturday said that while they respect the right of people to memorialize the statue, they are happy that it has been removed from campus.

“I am personally very happy that the statue is down. I wish this hadn’t happened in such a violent way, in such a disruptive way,” graduate student Susanna Harris said.

Chapel Hill police chief told officers to 'stay way out' as Confederate monument was toppled; one officer put on leave amid concerns over tattoo

Harris said she wishes that the administration had listened to negative reaction to the “Silent Sam” statue over the past few years and removed the statue before it was toppled by protesters.

UNC-CH chancellor: 'We were not remiss' in leaving 'Silent Sam' statue standing before protest

Jonathan Fitzgerald Fuller, Lauren Aucoin, Margarita Sitterson and Raul Acre Jimenez have all been charged with misdemeanor rioting and misdemeanor defacing a public monument in connection with the Aug. 20 protest where “Silent Sam” was toppled.

Since the statue fell, at least a dozen others have been arrested in connection with two subsequent protests on campus.

The group that brought flowers to the place where "Silent Sam" used to stand said they plan to return every Saturday with more bouquets.