'Safety is a big thing': Travel agent urges Americans to check for warnings when traveling abroad

Raleigh, N.C. — On Tuesday, U.S. Sen. Thom Tillis' office was in contact with the Raleigh woman who has been stuck in Honduras for more than a week and said they believe she will be getting her passport back on Wednesday.

Amanda LaRoque, 51, had been checking out houses in Roatan, on an island off the Honduran coast, and was heading back to the U.S. when she was arrested at the airport late last month.

She was carrying a "can safe," a fake Arizona Iced Tea can used by tourists to hide money and jewelry while on the beach, and airport security asked to examine it. When they found the can was empty, they cut into the lining and found a substance authorities believed was cocaine. On Friday, the substance tested negative for narcotics, and she was released from jail.

LaRoque's attorney filed paperwork to have her passport returned around 4 p.m. Friday, but the Honduran district attorney must sign for her to leave the country. 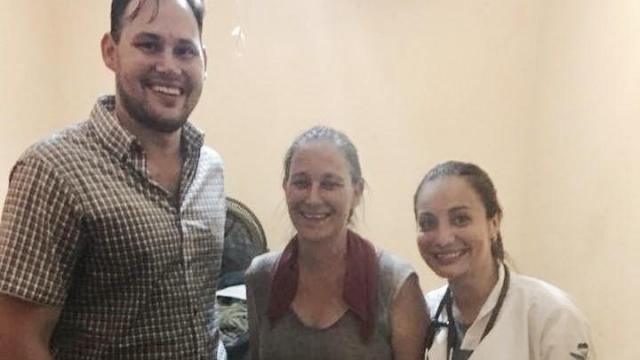 That district attorney is on vacation on the mainland of Honduras and will not return to the island until Wednesday. The prosecutor also filed an "innocent but on probation" appeal, meaning if LaRoque were to visit the island within five years and faced legal issues, the government could revisit the case.

The Honduran government has her passport and is refusing to return it.

Tillis said that, if LaRoque does not get her passport back tomorrow, his office will make other plans to help her leave.

In January, the U.S. State Department issued a travel warning to Americans going to Honduras. There is also a warning about El Salvador.

Anyone can check for travel warnings posted on the State Department website.

"Safety is a big thing, and there is a lot of concern out there," said Sandra Horton, a AAA branch travel manager.

Heidi Hobbs, a professor at North Carolina State University, recommends going online and registering with the U.S. embassy when traveling.

"You enter your passport information, your emergency contact information, particularly if someone is looking for you," Hobbs said.

"I believe we are very naive, we're very lucky. We just go about our business like nothing. Unfortunately, we have no fear," Horton said.

Hobbs believes LaRoque will eventually get her passport back and will be allowed to leave, but maybe not as fast as she had hoped.

"Americans want everything to happen in a very quick kind of way, and that's not necessarily the way, literally, the rest of the world works," she said.

Tillis' note to LaRoque said the embassy and the State Department are not aware of situations where the Honduran government has lied or made up cases against American citizens.

LaRoque and her husband, Brandon LaRoque, own The Goat bar on Western Boulevard in Raleigh.