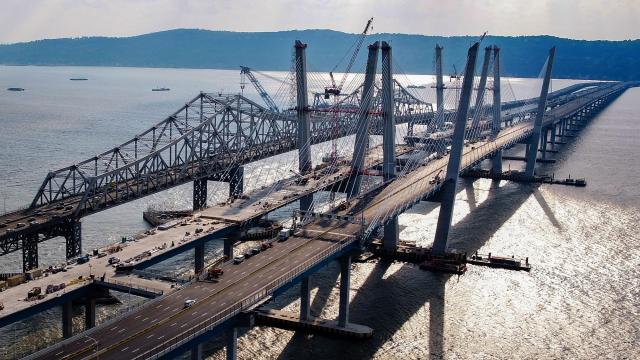 The opening of the second span of the Mario M. Cuomo Bridge in New York on Saturday was delayed after a piece of its predecessor, the old Tappan Zee Bridge, which is parallel to it, became destabilized and threatened to fall, officials said.

The Tappan Zee was being disassembled when the “potentially dangerous situation developed” and a piece of the old bridge became destabilized, Matthew J. Driscoll, executive director of the New York State Thruway Authority, said in a statement Saturday.

Driscoll said that the Tappan Zee was being evaluated but that the new span of the Mario M. Cuomo Bridge would remain closed until the authority was “assured there is no risk to the new span.”

There appeared to be problems with joints that could have theoretically caused the old bridge to fall toward the new eastbound span, which is 160 feet away, he said.

Engineers inspected the old bridge and it did not appear that the new span was in danger, Towle said, adding that he had no estimate on when the eastbound span would open. He said he was waiting for additional assurances from multiple engineers that the old bridge was fully stabilized.

“I’m not going to take any risk whatsoever,” he said.

Gov. Andrew M. Cuomo told reporters earlier Saturday that contractors on Friday had discovered a damaged and rusted piece of the old bridge that could pose a potential threat to the new span.

“We want to move the traffic over as quickly as possible,” Cuomo said. “The new bridge is ready.”

The Coast Guard closed the main federal navigation channel of the Hudson River on Friday after the structural issue was found.

On Saturday, the Coast Guard reopened the western part of the river to vessels that checked with the patrol commander enforcing the safety zone, but it said the eastern half remained closed because of the destabilized bridge.

Coast Guard officials did not immediately respond to a request for comment.

The problem came a day after Cuomo and other dignitaries gathered at the new bridge to celebrate the planned opening of the second span. Cuomo lauded the new bridge as a testament to “New York’s greatness” that “shows the world that we’re capable of dreaming big and delivering results for the people of this state.”

The first span of the new bridge, a $4 billion project, opened last year after decades of wrangling over whether to repair the Tappan Zee or build a new bridge.

The westbound span of the bridge had been carrying both eastbound and westbound traffic. Eastbound traffic was set to be shifted to the new span after it opened this weekend, but concerns about the stability of the old bridge delayed that shift.

The new bridge, which connects Rockland and Westchester counties, is a two-span cable-stayed design, with the cables holding up its steel decks anchored to the tops of the angled central towers rather than to the shore.

The old Tappan Zee was closed to traffic in October and was being disassembled piece by piece. By December, each end of the bridge had been removed so that it did not connect to either bank of the Hudson River.

As the Democratic primary in New York on Thursday approaches, Cuomo’s opponents seized on the problem with the old bridge, with some suggesting that Cuomo prematurely announced the opening of the span of the new bridge. The goal had been to fully open the new bridge in 2018, and Cuomo said last month that he was looking at a mid-September completion.

“A ribbon-cutting ceremony should not have been held if the bridge span was not yet safe,” said Cynthia Nixon, the actor and activist who is challenging Cuomo in the Democratic primary.

Marcus J. Molinaro, the Dutchess County executive and Republican candidate for governor, said in a statement Saturday that “it’s now clearer than ever that the bridge was opened to meet Governor Cuomo’s political agenda without regard for public safety.”

Stephanie Miner, the former mayor of Syracuse and an independent challenger of Cuomo, said in a statement: “What’s more important — fancy ceremonies so the governor can get good press before the primary or safety?”

Dani Lever, Cuomo’s press secretary, said in a statement: “The Mario M. Cuomo bridge is complete and ready for traffic and the action taken by TPZ Construction, given the potential issue on the old structure, was out of an abundance of caution and about public safety, not politics. Anyone trying to score political points off of it only underscores why they are unfit to serve.”

Towle said the abrupt change of plans for the new bridge was a blow for the engineers and workers who were prepared to open the new structure.

“We worked our butts off to get this eastbound span done,” he said. “The fact that it’s sitting empty waiting for traffic is somewhat of an embarrassment.”