Chapel Hill, N.C. — Police on Thursday night said they were unable to find anything dangerous inside a car after receiving reports of a suspicious vehicle in a Carrboro parking lot, but believe the owner of the car is the same person responsible for a small explosion on the University of North Carolina at Chapel Hill campus.

One person was taken into custody Thursday afternoon after authorities said a small device detonated at the Davie Poplar tree, which was planted when UNC-CH was founded. 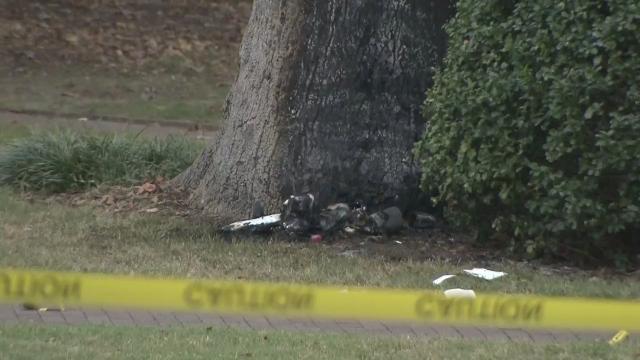 Video shows a man attempting to put out the fire at the base of a tree when an explosion causes a fireball to erupt around him.

"I heard a large boom and looked back to see a 20-foot tall ball of flames," said student Evan White.

White was nearby and ran toward the flames to grab some photos.

"I noticed there was a professor there who had been injured with burns. Apparently, he was trying to put out the fire and it exploded pretty much on him," White said.

White said the professor was burned on his face and arms and his shirt partially melted. Students tried to help by tossing water on him. 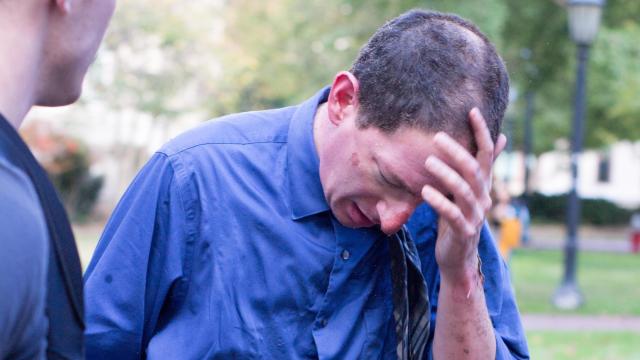 Video footage shows the professor sitting on the ground as first responders rushed over.

"He was in a complete state of disarray, terrified," White said.

The fire had been put out by about 4:45 p.m., authorities said. The professor was treated for non-life threatening injuries.

UNC police called Carrboro police following the incident to tell them to be on the lookout for a suspicious vehicle.. A bomb squad arrived at the scene at about 5 p.m. and began investigating a 2011 Honda Accord parked in a public lot on Weaver Street. 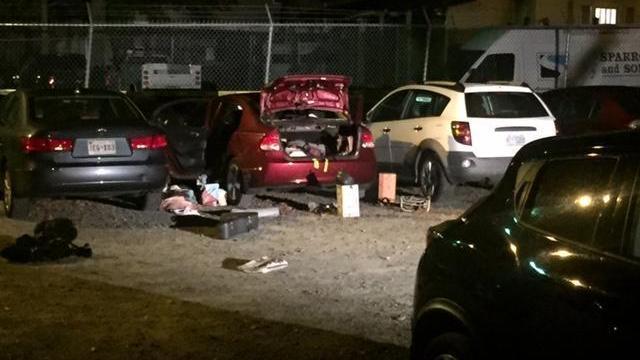 After accessing the car's trunk and thoroughly searching the vehicle, no explosives or incendiary devices were found, according to Capt. Chris Atack.

"At this point, we don't have any indication there is any threat to the public," he said. "At this point, like always, we're going to operate out of an over abundance of caution, for the safety of the public."

As an added precaution, Orange County activated its alert system, warning people about the incident and encouraging them to aviod the area.

"That's Orange County alerts, to get people information. We can geographically target it through emergency management. They were great partners tonight," Atack said.

Carrboro police said any evidence found in the vehicle will be turned over to UNC campus police.

The Davie Poplar tree, which is located in McCorkle Place near the Old Well on the University of North Carolina at Chapel Hill campus, has a legend that dates back to the beginnings of the university. Students on Thursday night were questioning why somebody would want to set it on fire.

"I'm just kind of in awe of why someone would do that. I am just really confused about the motivation behind it since it is such an important part of our school's history here," said student Blake Matthews.

Authorities have not released the name of the person in custody.