‘Paradise is Gone’: California Fires Devastate Communities and Threaten Others 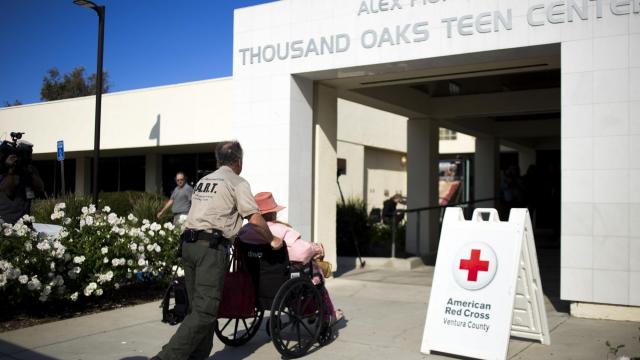 PARADISE, Calif. — Rex Stewart was broke when he landed in Paradise, California, more than 40 years ago. But he found work as a carpenter, helping build parts of this mostly modest town of retirees and commuters tucked away in the Sierra Nevada foothills.

On Saturday, after escaping what is now believed to be the most destructive fire in California history, he stood outside an evacuation shelter with no more to his name than the coat he had on and a winter cap with a peace symbol on it.

“Paradise is gone,” Stewart, 66, said, pulling on a cigarette. “There’s nothing to go back to.”

Fires continue to rage on both ends of California, spreading with breakneck speed and displacing hundreds of thousands of people in a state where a once-seasonal worry has become a near-constant terror. At least nine are dead in the Camp Fire, about 100 miles north of Sacramento, and two others have died in fires near Los Angeles.

Wildfires are fickle pillagers, pivoting to spare one thing and destroy another, twisted by wind and the fuels they feed on. Fire prevention authorities routinely drum the words “perimeter defense” into residents’ minds in this part of California. Keep trees trimmed and burnable things far from home, and fire’s danger diminishes.

But the fires that erupted this past week did not follow those rules. And Paradise, in Butte County just west of the city of Chico, bore the brunt of the devastation. In what fire officials said was an unstoppable stormfront fire, beginning early Thursday morning, the Camp Fire has exploded across 100,000 acres and destroyed more than 6,700 homes and commercial buildings.

Paradise, home to about 26,000 people, was shrouded in smoke Saturday. Flames still licked downed power poles, and ghostly chimneys jutted up from charred concrete foundations. Evidence of the chaos of escape lined the road out of town, in the charred frames of cars and trucks that were abandoned midescape. Some cars had crashed into one another as flames roared on both sides of the road. At least five people died in their vehicles, overcome by the inferno, authorities said.

At Adventist Health Feather River hospital, which Stewart said he had helped build, a helicopter pad was filled with the remainders of a recent evacuation. Wheelchairs and beds, lab equipment and saline bags still hanging on their hooks sat jammed on the concrete pad, which was surrounded by a moat of rocks to keep the flames at bay. Portions of the hospital escaped destruction and became a shelter for some people who huddled in a basement as the fire came through.

The Camp Fire is not over. Only 20 percent contained, it still threatens other communities, including the edges of Chico, the biggest city in Butte County and the evacuation destination for many Paradise residents, like Stewart.

For James Betts, another Paradise resident, the miracle of escape has given way to the losses he knows he will face back home. Betts, a 33-year-old groundskeeper at a tree nursery, had tried to get out on foot on the morning of the fire. He does not own a car, and none of the seven people with him, including a nephew and his pregnant girlfriend, did either.

A man in a pickup truck, known to none of them — Betts never even learned his name — pulled up and shouted for them to climb into the bed of the truck. And so they all made it.

“It’s kind of hard when you don’t have a town to go back to,” Betts said. “When you’ve been raised in the mountains your whole life, it’s always your retreat.”

One of two major fires in Southern California, called the Woolsey, has surged as well, doubling in size overnight to 70,000 acres and forcing the evacuation of about 250,000 people, according to state officials. It was 0 percent contained as of Saturday morning. Fire crews in Ventura and Los Angeles counties were fighting on steep, hilly terrain that made controlling the blaze difficult.

“Our firefighters have been experiencing some extreme, tough fire conditions that they said they’ve never seen in their life,” said Daryl Osby, the chief of the Los Angeles County Fire Department. “We just ended the hottest summer on record. We have fuels that are in critical drought state right now. This is the sixth year of seven years of drought in this region.”

Osby said that winds were expected to pick up on Sunday and last through Tuesday, further complicating firefighting efforts in the region, and that they currently had no timeline for lifting evacuation orders or opening Highway 101, one of the region’s major thruways. Scott StJohn, 42, an entrepreneur and fitness company owner, was evacuated from his home in Malibu on Friday morning with his family, believing that “there was no way the fire was going to reach all the way down to the beach.”

Ash from the fire and heavy winds rained down on the family’s car as they drove up the Pacific Coast Highway. The situation sank in when they looked behind them as they drove. All they could see, StJohn said, was “a blaze of orange.”

The hardest thing for them, StJohn said, was going to be bringing some kind of normalcy back for their children. “They don’t have school, they don’t have any of their clothes,” he said. “All we grabbed was our passports.”

At East Avenue Church in Chico, about 10 miles from Paradise, 200 people made temporary homes in church classrooms, in a gym filled with cots, air mattresses and couches, and in tents set up in a field on the property. As one of the few shelters in the area accepting pets, it was also teeming with displaced dogs.

Pastor Ron Zimmer recalled receiving guests shortly after the fire broke out, with many arriving in vehicles that bore the marks of the flames.

“We started getting cars where all the plastic in the outside was melted and the bumpers were gone,” Zimmer said. “Everybody came down and told horrific stories. We haven’t talked to a lot of people who think they have homes left.”