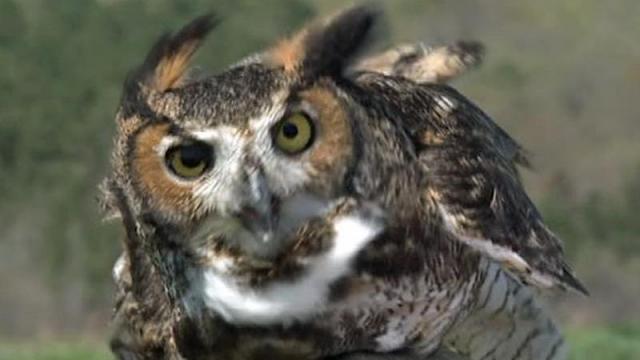 Durham, N.C. — Long put forward as an alternative hypothesis to Kathleen Peterson's death 15 years ago by those who believe her husband didn't kill her, the so-called "owl theory" has resurfaced a week after Mike Peterson pleaded guilty to manslaughter in the case.

Peterson's defense attorney, David Rudolf, filed a motion last Friday seeking access to evidence of feather fragments collected after Kathleen Peterson's Dec. 9, 2001, death so that they can be examined by an expert at the Smithsonian Institution in Washington, D.C.

Kathleen Peterson was found in a pool of blood at the bottom of a staircase in the couple's Durham mansion. Although Mike Peterson has maintained that his wife died after falling down the stairs, he was found guilty following a three-month trial in 2003 of beating her to death and was sentenced to life in prison without parole.

After more than eight years in prison, he was granted a new trial in December 2011 when Superior Court Judge Orlando Hudson ruled that a key prosecution witness had lied on the stand during the original trial.

That trial never came to pass, however, as the 73-year-old novelist and one-time Durham mayoral candidate entered an Alford plea on Feb. 24 to a charge of voluntary manslaughter. Under an Alford plea, a defendant can maintain his or her innocence while acknowledging prosecutors have enough evidence for a conviction.

Hudson sentenced Peterson to 64 to 86 months in prison and gave him credit for the 89 months he had already spent behind bars, allowing him to walk out of the courthouse a free man.

"Although Mr. Peterson has entered an Alford plea to the crime of voluntary manslaughter, this plea has not put an end to the question that has loomed over this case from the beginning: what caused the unusual wounds to Kathleen Peterson's scalp that led to her death from loss of blood," Rudolf wrote in the motion.

Several "raptor experts" have suggested the wounds were the result of an owl attack. Kathleen Peterson was putting Christmas decorations on her lawn the night she died, and an owl could have mistaken the decorations for prey and gone after her because she was near them, according to the motion.

"Although this hypothesis has been scoffed at and made into a joke by those who believe in Mr. Peterson's guilt, it is supported by some of the physical evidence found at the scene," the motion states, such as drops of blood on the front walk, hair pulled out by the roots in Kathleen Peterson's hands and bloody twigs and two feather fragments in her hair.

Rudolf wants to give the feather evidence to Carla Dove, a forensic ornithologist at the Smithsonian's National Museum of Natural History, to identify their source. Peterson's family would pay for her services and any costs associated with transporting the evidence to her and back to Durham County without breaking a chain of custody.

"In light of Mr. Peterson's Alford plea, the state cannot be prejudiced by this examination of feathers by Dr. Dove," the motion states.

Peterson's defense has never previously mentioned Kathleen Peterson was putting up Christmas decorations before she died. In the past, they have said the couple was drinking by their pool late into the night, and an intoxicated Kathleen Peterson then went inside by herself and tumbled down the stairs.