‘Out of Touch?’ Not Liberal Enough? Feinstein Begs to Differ 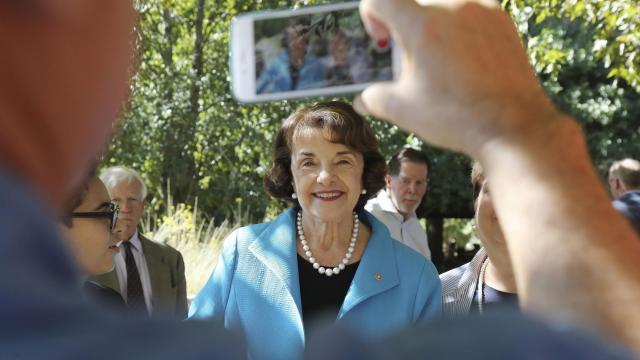 WHITEWATER, Calif. — There was the 5-mile dusty drive to a remote wilderness reserve on the outskirts of Palm Springs, to talk about her efforts to protect the pristine deserts and mountains that make up so much of California.

A few days later, it was off to Salinas for a tour of a mushroom farm with members of the powerful United Farm Workers. And on Thursday, Sen. Dianne Feinstein, D-Calif., was posing in front of a C-130 firefighting air tanker outside Sacramento as she got a briefing from state officials about the coming fire season.

At a time when other members of this state’s Democratic old guard are moving toward retirement, Feinstein, 85, is running again, closing out what will likely be her last campaign with a statewide tour that has all the markings of a career valedictory.

And weeks after she was pummeled by Republicans, including President Donald Trump, for her actions during the confirmation hearing of Justice Brett Kavanaugh to the Supreme Court, she appears to be cruising to victory over her opponent, Kevin de León, the former Democratic leader of the state Senate.

As she traveled around the state, she drew no criticism for how she handled her role as the senior Democrat on the Judiciary Committee.

Feinstein’s dominant position comes despite opposition from some Democrats, who contend it is time to dispatch a younger, less moderate, more partisan member to the front lines in Washington, and amid criticism that her age is beginning to take a toll. (The state Democratic Party, in a notable rebuke, endorsed the younger and more liberal de León.)

Her apparent lead suggests that at a time of generational and ideological upheaval, California — the face of the liberal resistance — still has an appetite for a politician who embraces political moderation. And in an interview, Feinstein said the Senate needed a mix of political ideologies — and of younger and older leaders.

“I think it takes both,” said Feinstein, who has been a staunch moderate since her days as mayor of San Francisco. “I think a government of just young people — it should be a government of all people. America is growing more elderly.”

By all appearances, this campaign is hardly the toughest race she has faced since she first joined the San Francisco Board of Supervisors 49 years ago. She narrowly lost a bid for governor in 1990 to Pete Wilson, a Republican who was senator at the time. (She went on to take his seat in a special election in 1992.)

The visit to Salinas, 50 miles south of San Jose, was only one of three campaign appearances she made last week. Though she had been making stops around the state, her pace was far less busy than would normally be expected with Election Day so close.

De León, in an interview, called her “out of touch” with California values and how politics is now conducted in Washington, but Feinstein declined to address any of his criticisms.

“You’re not going to get anywhere on this,” she said. “I’m so substantially ahead I don’t pay any attention to him.”

And in a show of just how much money the Feinstein campaign has to spend, it treated 100 supporters to a three-course sit-down lunch at Lulu California Bistro in Palm Springs. Typically, these kinds of luncheons are fundraisers, which require attendees to contribute to attend.

De León has struggled since the June 5 primary, in which he drew 11 percent of the vote — enough to qualify him for the November contest against Feinstein, who got 44 percent.

Feinstein has $4.2 million cash on hand, according to the latest Federal Election Commission report, compared with $294,361 for de León. Feinstein leads de León by 43 percent to 27 percent in a poll by the Public Policy Institute of California released last week.

Even the relatively light pace of this campaign has proved tiring for Feinstein, as she has remarked more than once, showing the wear and tear that comes from being a candidate running in a state this vast. “I’m glad the campaign is over in five days,” Feinstein said with a laugh at a women’s luncheon in Sacramento on Thursday.

Feinstein described Washington as more dysfunctional than at any time in her career, and acknowledged that Democrats were unlikely to win back the Senate. But asked why she was running and whether there was anything left for her in this new environment, Feinstein leaned across a table, saying she was eager to serve another term as senator.

“Oh yes!” she said. “I have another assault weapons bill drafted. And I have a bill on the prohibition on the separation of children.”

“My opponent always uses seniority derogatorily,” she said. “But it has advantages in the Senate.”

De León, 51, said he did not think Feinstein was too old to serve, but argued that she was out of step ideologically and in her embrace of bipartisanship.

“She believes she has more to contribute: I respect that,” he said. “But I disagree with her values and her lack of fight during a dangerous and consequential time during our nation’s history. The comity of 25 years ago doesn’t work with this specific president who is trying to tear down all of our democratic institutions.” Ginny Foat, a Democrat and a retired member of the Palm Springs City Council, said she did not agree with the argument that Feinstein wasn’t in tune with her state.

“She has been a steady supporter — like her position on guns,” she said, referring to Feinstein’s authorship of the ban on assault weapons, now expired. “If by the wildest chance we took back the Senate, we would have a solid vote with her.”

Barbara Boxer, 77, a Democrat and former California senator who retired in 2016, said she saw no reason Feinstein should join her in retirement.

“Why should she?” Boxer said. “It’s up to the person and if this is what they want in their life. There shouldn’t be ageism or sexism or anything-ism.”

“Seniority is the name of the game in the United States Senate,” she said.

Feinstein has been helped by the rallying of the state’s establishment around her, no matter the vote of the Democratic Party. “Dianne Feinstein’s seniority and experience are too valuable for Californians to give up,” The Los Angeles Times said in endorsing her.

Feinstein appeared engaged as she campaigned, lingering to talk to voters and reporters. In a 30-minute interview, she was eager to present herself — after some equivocation earlier in the campaign — as a steadfast critic of Trump.

“Presidents are supposed to bring people together, not drive them apart,” she said after the arrest of a suspect for sending bombs to Trump’s critics, but before the deadly attack on a synagogue in Pittsburgh. “And all of these rallies — lock her up.” She added, “Why? Why do that? To create hatred.”

At the same time, Feinstein did show some signs of fatigue. Her return to the campaign trail came after a grueling stretch in Washington where she served as the senior Democrat on the Senate Judiciary Committee during the Kavanaugh hearings. Throughout the hearing, Republicans attacked her for her handling of a letter from Christine Blasey Ford, a research psychologist, alleging that Kavanaugh had sexually assaulted her when they were teenagers.

Trump portrayed Feinstein as doddering after her performance. “I don’t let myself think about it,” she said about Trump’s criticism. “I have to consider the source. This is the president of the United States. Why is he calling people names — whose vote may he need?”

“I think I’m in good physical condition,” Feinstein volunteered as she discussed his attacks on her. She nodded when asked if she felt as sharp as she did 20 years ago.

“Yes I do,” she said. “I feel better. Certainly better equipped. I know more. I work as hard. I probably don’t go out as many nights a week as I did when I was 21 or 22. But I do the job.” Eileen Stern, 69, a fundraiser who lives in Palm Springs, said she thought Feinstein was needed in Washington, particularly now, given her experience.

“She’s done a great job,” she said. “I do think there’s a case to be made, by my millennial friends, that we would like to see younger people. But this isn’t the year to make it.”