Wake County, N.C. — If you have driven east on U.S. Highway 264 in Wake County recently, you may have noticed a unique billboard.

A local family is attempting to honor their high school graduate, who they say is not being honored by the school district.

Senior Josh Allmon said he's worked incredibly hard at East Wake High School and has earned the title of valedictorian, whether the school system recognizes it or not.

His family said he has the highest grade point average of the 270 students in the class of 2018.

"It shows up on my transcript as No. 1,” he said. “Being friends with everyone, I know that it's about two-tenths of a GPA point." 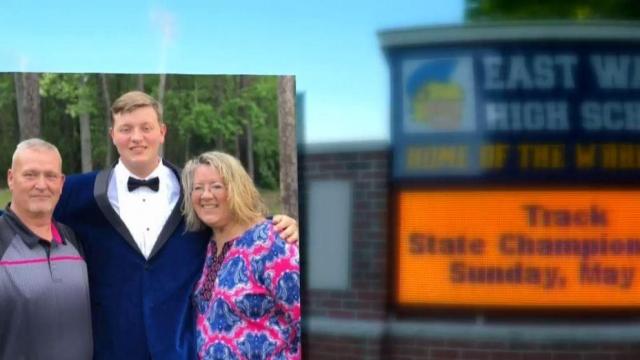 But this year, East Wake High, adopted the Latin honors system ranking system, which does away with individual student rankings.

All other Wake County high schools will follow suit next year.

Allmon’s family was upset their son would not be formally honored.

“That meant that my son, Josh, would not be recognized as the same as the other schools in Wake County," his father, Garry Allmon, said.

He said, aside from his son’s stellar 5.31 GPA, he has excelled in extracurricular activities and sports.

“Played sports at East Wake, was the president of two honor societies and (involved in student government)," Garry Allmon said.

The family purchased space on a billboard to carry the message: “Congratulations Josh Allmon. You will always be our valedictorian. East Wake Class of 2018.”

The digital billboard was a bit of a surprise to Josh.

“I didn't actually think you would do it because I figured it would be so expensive,” he said.

A digital billboard of that size typically costs around $1,800 for 10 days, but the proud father said he would have paid more.

"I just wanted to show my son there are people out there that really are proud of you, of what (he) did and accomplished,” he said.

Josh said he's getting calls and text messages congratulating him on his accomplishments. But for him, the billboard is sending a bigger message.

“Hopefully, people outside of the school will see that it's an issue and how the policies are affecting the students,” he said.

The billboard will be up until June 12, the day of the East Wake High graduation ceremony.

He will attend North Carolina State University in the fall and plans to study chemical engineering and paper science engineering with a minor in business.