'No Wall, No Ban, No Fear' rally draws crowd in Raleigh 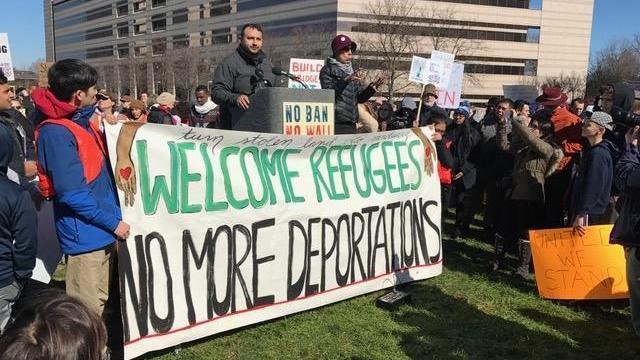 Raleigh, N.C. — A crowd turned out on Saturday for the No Wall No Ban No Fear Rally in Raleigh to protest recent executive orders by President Donald Trump that limit travel from certain countries and block refugees coming to the United States.

"This is the land of the free for everyone, not just certain people, and it would be nice to see that shown," said Khadija Beveridge.

Tanja Bauer said, "I'm here to speak up and get our voices heard for what's right."

Protesters carried signs and delivered speeches at Halifax Mall in downtown to show support for the people affected by the orders. Trump signed actions to block refugees, to stop travel from several counties, including Syria, Iran and Iraq, and to start plans to build a wall along the U.S. border with Mexico.

Organizers said the protest was to show support for Muslims, refugees (and) immigrants.