'Mindfulness' meditation technique finding new fans in Triangle and beyond

Durham, N.C. — At 9 a.m. in Kate Newman's second grade classroom in Durham, students are participating in a new form of mediation that is gaining ground.

"We are going to start by turning on our mindful bodies," she said recently to the children who were sitting in a circle at the front of the room.

"Your back is straight," she said. "You're still."

The class is practicing a form of meditation called "mindfulness." It's a simple process of sitting quietly for a few minutes and focusing solely on your breath. Mindfulness meditation is getting so popular as a stress-reduction technique that it is now being taught everywhere from the boardroom to the classroom.

"Whenever I do it, I feel so calm and relaxed," said Michael Seaber, a student in Newman's class. "It really helps me when I am having tough times."

Newman, who teachers second graders at Triangle Day School, began her personal mindfulness practice while dealing with an eating disorder. She quickly saw the benefits and became certified to teach the practice. Now she spends a few days a week passing those lessons to her students.

"I thought back to how many times kids are taught to calm down and stop doing that, and they aren't really taught how to calm down," she said.

Newman added mindfulness to her lesson plan three years ago. She met with the parents of her students to explain her plans, and she said they quickly got on board when they noticed changes in behavior outside the classroom.

"So many parents have come up to me and told me how their child has used mindfulness at home."

One of those parents is Donna Berkelhammer, who describes her son, Isaac, as "all boy" and "very loud."

Berkelhammer said she has seen a change in the way her son deals with conflict.

"He's come home a couple of days and said, 'Hey, I got into an argument with so-and-so on the playground about a ball, and I was about ready to throw it at him, and then I remembered I can just do some mindful breathing and step away,'" Berkelhammer said.

The practice isn't just useful on the playground.

Professionals are using mindfulness meditation as a way to deal with all of the distractions of a modern workplace.

Mary Linda McBride, who trained at Google's "Search Inside yourself Leadership Institute," travels around the Triangle teaching mindfulness to employees at local businesses.

"The formal practice of mindfulness meditation is like going to the gym," she said. "You are training your brain toward focus, toward being able to marshal your own attention."

Researchers from Carnegie Mellon and the University of Pittsburgh showed why this works by looking at MRI images of study subjects who had been practicing mindfulness meditation for eight weeks. The images showed a decrease in the size of the amygdala, which is the "fight or flight" center of the brain.

While mindfulness meditation does take its roots from Buddhism, teachers stress the modern version is a secular practice, and followers do not have to be a Buddhist in order to practice it.

Some people even use the time to incorporate prayer.

McBride said she is hoping more people catch on to the trend and take a chance to unplug from their phones for just a few minutes a day to exercise the mind.

"It's an innate human quality, and we can practice it. We can cultivate it, and at this time in our culture, it's really necessary because we are more and more distracted," she said. 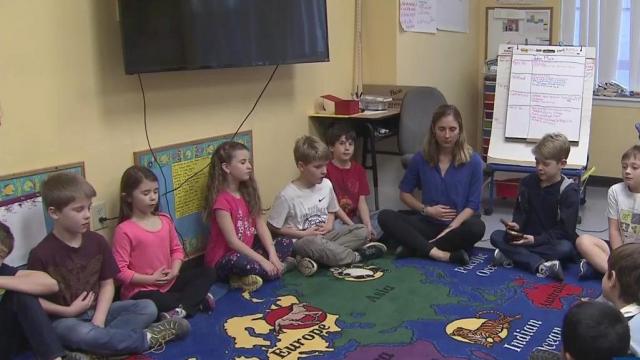