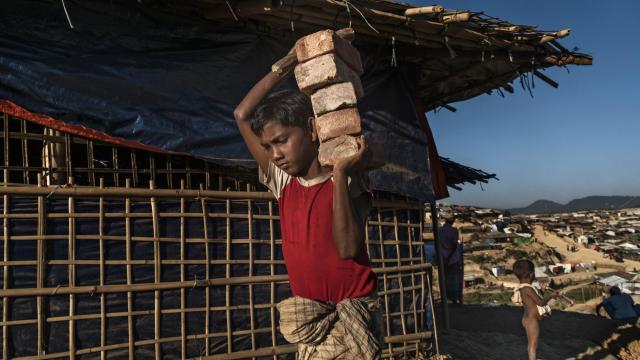 BALUKHALI, Bangladesh — Jehora Begum was a fast runner, racing through rice paddies and splashing through canals.

But how can a 12-year-old girl outrun a bullet?

When Myanmar’s military and Buddhist vigilantes descended on Rohingya Muslim villages in late August, burning homes and spraying gunfire, 14 members of Jehora’s family — including her mother, her father and four of her siblings — couldn’t run quickly enough.

They all died, according to witnesses and human rights groups investigating the massacre in Maungdaw Township.

Jehora was shot as she waded through a canal, the bullet lodging near her pelvis. Still, she and her younger brother, Khairul Amin, made it to safety in southeastern Bangladesh, where refugee camps now house far more Rohingya than remain in their homeland in Rakhine State in Myanmar.

“I have nightmares that the military is chasing me,” Jehora said. “I wake up, and I think of my parents, and then I stay awake for a long time.”

Of the more than 655,000 Rohingya who have fled to Bangladesh since the Myanmar military began its crackdown in late August, around 380,000 are minors, according to Save the Children, the international aid organization. At least 30 percent of the refugee population is younger than 5. Children are everywhere in the camps, fighting for aid handouts, wading through sewage and balancing jugs of water or bundles of firewood on their heads. Some are dressed in improbable combinations of donated clothes: a tiny tuxedo jacket paired with basketball shorts. Many wear nothing but dust.

More than anything, the soundtrack of the Rohingya refugee camps is a child’s wheezing cough, followed by a prolonged sniffle.

The prospects of these young refugees, say child development experts, are grim.

“What we’re seeing is the perfect breeding ground for a massive mental health crisis for children,” said Lalou Rostrup Holdt, a mental health adviser for Save the Children.

“You have trauma on a huge scale, children seeing brutal killings and being forced to leave home with nothing,” Holdt said. “You have hunger. You also have significant developmental delays due to malnutrition and understimulation that predate the recent trauma. It’s absolutely devastating for an entire community.”

Holdt, who has been working in the camps for two months, said that many Rohingya children are living in a state of near constant “fight or flight” arousal, a hyperstressed condition that can change the architecture of their brains.

Yet the children who made it to the camps are the lucky ones. Doctors Without Borders estimates that at least 730 Rohingya children younger than 5 were killed in Myanmar between late August and late September, mostly by gunshot, according to a survey released in December. Nearly 10 percent of those children were burned in their homes, while 5 percent were beaten to death.

The international medical charity cautioned that its estimate was conservative and probably understated the true mortality figures.

Although the governments of Bangladesh and Myanmar say they will proceed with a voluntary repatriation scheme in the coming weeks, there is little enthusiasm among Rohingya refugees for returning to the site of what Western governments have labeled ethnic cleansing.

The Myanmar government has stripped most Rohingya of citizenship and considers them to be illegal immigrants from Bangladesh.

The likelihood, then, is that hundreds of thousands of Rohingya children will grow up both stateless and homeless — an untethered life of displacement that bodes ill for a people already wounded by decades of military persecution in Rakhine State.

“There have been other recent crises in places like Congo where children saw their families slaughtered or mothers being raped,” said Benjamin Steinlechner, a spokesman for UNICEF in Cox’s Bazar, Bangladesh. “But the scale of what has happened with the Rohingya is so much greater than what we’ve seen in other places. We have no idea how all these children are going to process this trauma.”

For now, aid workers in the camps in Bangladesh are preoccupied with more immediate matters of life and death.

UNICEF says that 7 percent of children in the camps are suffering from severe acute malnutrition, a condition from which they will die unless they get proper care. That figure is three times higher than in other recent humanitarian emergencies. Even as international organizations scale up their aid efforts, parents wander the camps cradling infants with emaciated limbs and oversized eyes bulging out of skeletal faces. Children who look like toddlers turn out to be 6 or 7 years old — although their cauterized expressions have an adult’s hardness.

Outbreaks of communicable diseases, such as measles and diphtheria, are sweeping through the overcrowded camps, which, with the recent influx, now house more than 800,000 Rohingya.

At least 60 percent of water wells in Rohingya refugee settlements are contaminated with fecal matter from latrines that have been dug too close to drinking sources. Children suffer disproportionately from diseases that fester in refugee camps.

At a Doctors Without Borders clinic near Kutupalong, which now ranks as the world’s largest refugee camp, Noor Kadar, 4, lay feverish and short of breath, suffering from measles and pneumonia. Noor’s father, Abul Bashar, said that two of his other children were also sick, but the expense and effort it would have taken to bring them to the clinic overwhelmed him.

The longer-term consequences for Rohingya children are nearly as daunting. Chronic malnutrition stunts not only physical growth but intellectual development as well. Few youth in the camps have any idea how old they are.

Most children who fled to Bangladesh experienced significant trauma, whether witnessing relatives being killed or waiting for military raids to engulf their villages. Even hearing stories about massacres, a common currency in refugee camps, brings its own distress.

“When we got to Bangladesh, my grandmother described how my parents had been chopped to death,” said Mohammed Ismail, 13, most of whose family members were killed in a village in northern Maungdaw Township, according to fellow villagers. “I can never forget what she told me.”

And the suffering began long before the latest military campaign. For years now, most Rohingya children in Rakhine had no access to government health care or schools. College is all but out of the question. Mohammed Rafique was majoring in history at Sittwe University, in the state capital, but was forced to abandon his studies when tensions between Rohingya Muslims and ethnic Rakhine Buddhists exploded in 2012, after which many Rohingya were moved into camps or prevented from leaving their villages.

“We have no education and no job prospects in Rakhine,” he said, sitting in front of his shelter in the Balukhali refugee camp in Bangladesh. “Rohingya youth have no future.”

Shut out of the state education system, some Rohingya children attended private madrassas in Rakhine instead. But after Rohingya insurgents attacked Myanmar security posts last year, soldiers forced the closure of many of those Islamic schools as well.

“If we cannot teach Islam to our children, then we have nothing left to pass on to them,” said Said Hossein, an imam whose mosque in the town of Taung Bazar was shut down by the military.

Two weeks after he arrived in Bangladesh, Hossein opened a temporary mosque in Balukhali by binding stalks of bamboo with a piece of tarpaulin. Between prayer times, he is teaching children again.

But experts on Islamic militancy in Bangladesh worry that some of these makeshift schools, which have received funding from both local and Middle Eastern extremist groups, could become centers of religious radicalism or Rohingya militancy. “I teach the children that in our Quran it is permissible to use weapons to fight if someone attacks you or your property,” said Abul Osman, a teacher at another madrassa in Balukhali.

For most Rohingya children, a life studying holy texts — or waging jihad — is far beyond their imagination. Child labor is a fact of life for the Rohingya, as it is with communities across Myanmar. Soon after they learn to walk, children are expected to fetch water, gather firewood and work the rice paddies.

Today, at least 5,600 households in the Bangladesh camps are headed by children who arrived unaccompanied by adult family members, according to the U.N. refugee agency.

Even in families with a mother or father, a high birthrate — it is not uncommon for Rohingya to have six or seven children — means that parents struggle to feed their families.

To survive, some have begun offloading their girls to work as maids for middle-class Bangladeshis, or in the local garment industry.

“Children and adolescents are super vulnerable to being trafficked, whether for sexual exploitation or for household work,” said Steinlechner of UNICEF. “Right now we are still busy delivering aid, but we are aware that trafficking is happening under our noses.” By puberty, many Rohingya girls are married off, freeing a family from having to subsidize another child. By the time the average teenage girl arrives in the camps, she has two to four children of her own, according to U.N. estimates.

Rohingya boys have other options, like working in tea shops or providing manual labor for construction sites and road crews. (Unlike girls, they also can use their free time to play soccer with a ball of rags or fly tattered kites.)

Sayed Alam, 12, who arrived in Bangladesh nearly four months ago from Myanmar, makes $1.20 a day pulling in fishing nets on a beach not far from the refugee camps. It’s a job he also worked in Rakhine, he said, just like his father and grandfather before him. He has never attended school.

What does Sayed hope to do when he grows up?

“I don’t have any dreams,” he replied. “I will take whatever job I can find.”