Lillington, N.C. — Concerned animal lovers are wishing for a "happily ever after" ending after goose and bulldog best friends were separated last week.

"It's like a real life Disney movie," read a comment on the photo a woman shared on the Lost & Found Dogs of North Carolina Facebook group. 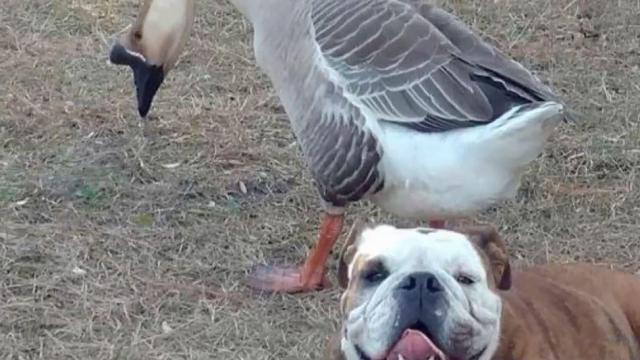 According to the post, the duo was spotted at 3 p.m. on April 24 on N.C. Highway 27 near Sydney Drive in Lillington.

The woman said she was "unable to catch the two" and that the goose seemed protective of the bulldog. According to another comment on the post, the goose is home, but the bulldog is still missing.

"The dog (Sadie) was picked up by someone and has not been returned," the user posted, adding that the goose honked in protest as a stranger leashed the dog before driving away.

According to Facebook users, the pair roams out to the highway often. "These two love Sydney Road," another Facebook user commented. "I see them every month. Someone stopped and picked up the dog. I’m sure the owner is missing them!"

An average of 16 posts are shared on the Facebook group daily aiming to reunite lost animals with their owners.