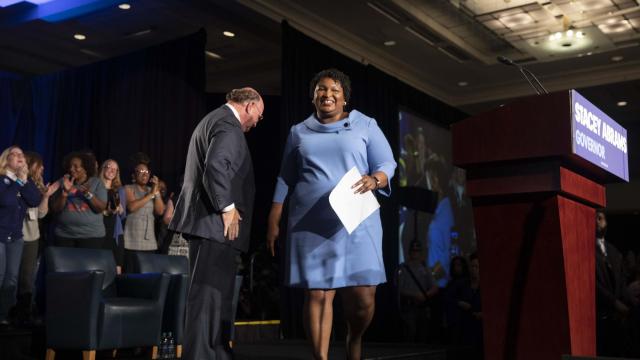 ATLANTA — Allies of Stacey Abrams, the Democrat who narrowly lost the Georgia governor’s race, filed a federal lawsuit Tuesday, calling for sweeping changes to the state’s election procedures, and accusing Brian Kemp, the Republican victor, of systematically disenfranchising poor and minority voters when he was secretary of state.

The litigation is a postscript to a bitter and close-fought election that many Democrats felt Kemp had rigged for his own benefit, while many Republicans considered Abrams — who did not acknowledge Kemp’s victory until 10 days after the election — a sore loser.

Lauren Groh-Wargo, Abrams’ campaign manager, said the lawsuit would “describe, and then prove in court, how the constitutional rights of Georgians were trampled in the 2018 general election.”

Standing with supporters and lawyers in front of a federal courthouse in downtown Atlanta, Groh-Wargo acknowledged that the governor’s race was over, even as she described Kemp as Georgia’s “secretary of suppression.”

The lawsuit, she said, would seek “wide, large-scale reforms” to improve future elections. One of its demands is for renewed federal oversight to protect minority voting rights.

Kemp has maintained that his policies as secretary of state protected the integrity of Georgia’s elections, and that the high turnout Nov. 6 showed that they had not deterred legitimate voters.

The suit was brought by an advocacy group for domestic workers and by a nonprofit group called Fair Fight Action that Groh-Wargo heads; she said Abrams sits on the group’s board.

Kemp won the governor’s race by about 55,000 votes, out of nearly 4 million cast. Hours after the polls closed, Abrams was trailing Kemp, but in an early-morning speech she promised her supporters that counts of provisional, absentee and other ballots would narrow the gap enough to force a runoff. Her campaign went to court repeatedly in search of uncounted ballots.

Once it had become clear that there were too few remaining to change the outcome, Abrams finally acknowledged defeat Nov. 16, declaring in a speech that there had been an “erosion of democracy” in Georgia under Kemp.

Some of Abrams’ most prominent Democratic supporters across the country, including some potential presidential candidates, claimed that the election had been “stolen” because Kemp’s office had purged hundreds of thousands of voters from the rolls, had placed tens of thousands of registrations on hold, and had overseen a problem-plagued Election Day process that critics said amounted to voter suppression.

Kemp is not named as a defendant in the suit; instead, it names his interim successor as secretary of state, Robyn A. Crittenden, and the members of the state election board. Even so, the suit repeatedly criticizes Kemp.

In Georgia, the secretary of state is responsible for overseeing the election process, and Kemp, a fervent supporter of President Donald Trump, has been denounced for years for pursuing policies that his critics describe as voter suppression tactics. He ignored repeated calls from Democrats for him to step down as secretary of state before the election, and not act as both a referee and a contestant in the race. The 66-page complaint filed in the U.S. District Court for the Northern District of Georgia reiterates a familiar list of issues that Abrams’ team and others had raised before and after Election Day. It argues that the state had imposed “discriminatory voting barriers reminiscent of the Jim Crow era” in recent years, with Republicans in control of the state legislature and the governor’s office.

Among the many specific requests made in the suit, the plaintiffs ask the court to force Georgia to stop purges of inactive voters from the rolls; to reinstate voters already removed by those purges; to ban the touch-screen voting machines the state uses, which leave no paper trail and which the plaintiffs say are not secure; and to ensure that voters “can vote without unreasonable delay or hardship during any election,” a reference to long lines seen at some polling places and the closing of others.

Notably, the complaint also asks that Georgia once again be placed under a federal “preclearance” regime, in which any changes in Georgia voting rules would require approval from a federal judge, to ensure that they did not impinge on the voting rights of minority voters.

Under the Voting Rights Act of 1965, much of the South, including Georgia, was subject to similar federal oversight, often performed by the Justice Department. But the preclearance review was effectively eliminated by the Supreme Court in a 2013 ruling, Shelby County v. Holder.

Asked to respond to the lawsuit, Ryan Mahoney, a spokesman for Kemp’s transition team, said that Kemp was busy “meeting with public safety and economic development leaders.”

John Watson, the chairman of the Georgia Republican Party, said that the lawsuit was “quite sad.”

“Abrams is resorting to suing the voters for rejecting her at the ballot box,” he said, “and she is trying to create a parallel universe built upon no facts, when Georgia had an unprecedented turnout from Republicans and Democrats in an historic governor’s election.”

The plaintiffs said that Georgia’s voting system violated the First, 14th and 15th Amendments, sections of the Voting Rights Act, and the Help America Vote Act of 2002. Groh-Wargo said hundreds of Georgia voters had signed affidavits that would help prove the plaintiffs’ case in court.

But there will be many complicating factors. One is the question of how much control the secretary of state has over county officials, who perform many of the most important election functions. Another is a Supreme Court decision in June 2018 that upheld the voter-purge system used in Ohio.

Richard L. Hasen, an election expert at the University of California, Irvine School of Law, said Tuesday that the Ohio case was about whether the state’s purges violated the National Voter Registration Act of 1993, while the Georgia suit claims violation of the 14th Amendment.

“So it’s primarily a different kind of challenge, one the Supreme Court did not address,” Hasen said. The Georgia case has been assigned to Judge Steve C. Jones, who was appointed by President Barack Obama and who heard some of the litigation filed after Election Day. He issued a mixed ruling in a case brought by Abrams’ campaign over whether to count certain absentee and provisional ballots.

In one order responding to a request for an injunction, the judge wrote that the improper loss of the right to vote was “an injury that money cannot compensate,” and quoted a Supreme Court opinion from 1964 saying that “no right is more precious in a free country than that of having a voice in the election of those who make the laws under which, as good citizens, we must live.”

Who will oversee Georgia’s elections for the next four years will be decided in a runoff for secretary of state Dec. 4.

The Democratic candidate, John Barrow, has called for overhauling the election system and said that erroneous purges of Georgians from the voter rolls was “a huge problem.”

By contrast, the campaign website for his Republican opponent, Brad Raffensperger, says that Raffensperger will “work to ensure that only legal citizens can vote and that our voter lists are correctly updated.”