‘It Was All Fake,’ Trump Misleadingly Says of Kavanaugh Accusations 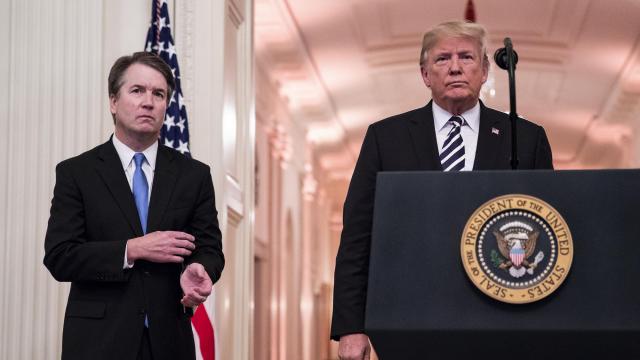 CAPE GIRARDEAU, Mo. — Some in the audience gasped in surprise when President Donald Trump told them that “the accuser of Brett Kavanaugh” had recanted her allegations. “It was all fake,” he declared.

Did Christine Blasey Ford really acknowledge making up an account of a sexual assault when she and Kavanaugh were teenagers? No. Trump was referring to another accuser whose account never figured prominently in the highly charged debate over Kavanaugh’s confirmation.

But by not naming her and by saying that “the” accuser had taken back her story, the president left the clear impression that he was talking about Blasey, the only accuser who testified before the Senate Judiciary Committee as millions of Americans watched on television.

The president’s carefully worded and misleading comments were a staple of his final weekend of campaigning before Tuesday’s midterm elections. At his rallies in Georgia, Tennessee, Florida and here in Missouri, Trump seized on the case of another accuser most Americans never heard about and did not himself name: Judy Munro-Leighton, who is said to have recanted her claim of sexual assault.

Ever since the Senate voted narrowly to confirm Kavanaugh despite the accusations against him, Trump had stoked a conservative backlash and sought to use it to motivate supporters to come out to vote. For a while, he said that “this will be an election of Kavanaugh, the caravan, law and order, and common sense.”

The Kavanaugh case has indeed proved to be a strong motivator for many conservatives who resented the way the nominee was treated and blamed Democrats for what they saw as a political hit job. Even Kavanaugh’s name became a rallying cry for Republicans on the campaign trail over the past few weeks in a way no other Supreme Court justice has in decades.

Some accusations lodged against Kavanaugh did fall apart under scrutiny or were withdrawn.

But the main accuser, Blasey, never wavered in her testimony about a party in the early 1980s when she said Kavanaugh, then a 17-year-old high school student, pinned her to a bed, groped her, tried to take her clothes off and covered her mouth when she screamed.

Blasey’s account remains in dispute. Kavanaugh adamantly denied it, and the other people she named being in the house at the time all said they did not remember the episode she described. During her testimony, she could not remember certain details like exactly where and when it took place.

But she passed a lie-detector test, and many Republicans — including Trump at first — said Blasey appeared credible even though they ultimately stood by Kavanaugh, citing the lack of corroborating evidence.

After Blasey’s testimony, Munro-Leighton contacted the Senate Judiciary Committee in October. She claimed she was the author of an anonymous handwritten letter signed “Jane Doe” from Oceanside, California, alleging that Kavanaugh and a friend “took turns raping me several times each” in the back seat of a car, according to the committee’s chairman, Sen. Charles E. Grassley, R-Iowa.

Under questioning by committee investigators last week, Grassley said, Munro-Leighton admitted she had never met Kavanaugh and had not written the letter. She knew about it only because the committee had made it public and she claimed authorship because she “just wanted to get attention,” Grassley quoted her saying. “I was angry and I sent it out,” she said of her email asserting she was Jane Doe, according to Grassley.

While Swetnick’s allegations generated some attention, Munro-Leighton was never a major figure in the confirmation fight and had nothing to do with the main accusations raised by Blasey and, separately, by Deborah Ramirez, who said Kavanaugh once exposed himself to her at a college party.

Much of the news media, including The New York Times, The Washington Post and The Associated Press, never mentioned Munro-Leighton before the confirmation vote.

Nonetheless, Trump portrayed her reported recantation to his campaign audiences in the past few days as if that cleared up the whole matter.

“The accuser of Brett Kavanaugh, a man who is a fine man, the accuser admitted she never met him, she never saw him, he never touched her, talked to her, he had nothing to do with her, she made up the story,” Trump told the crowd in Cape Girardeau, in southeast Missouri. “It was false accusations, it was a scam, it was fake, it was all fake.”

“And you know,” he went on, “when that came about, people were calling for him to immediately get out. Think of that. Think if he would have done that, and then we found out that it was all false accusations. False statements. A made-up story.”