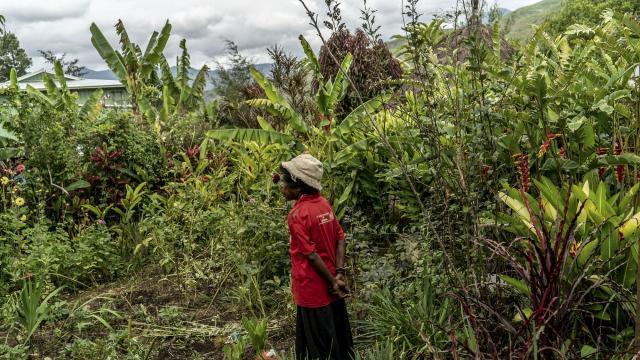 GOROKA, Papua New Guinea — Claiming that the rice she had cooked for dinner was too hot, Ambai’s husband suddenly punched her in the temple and dragged her out of the house by her hair. Another beating began, watched silently by her two aunts, who knew that speaking up would get them beaten as well.

He forced her to her knees at the small river behind their house and pulled out his rusty, homemade pistol. She felt the metal on the back of her neck, and waited for her husband to kill her.

“I thought, this is finally the end,” Ambai recalled. “At least the beatings will finish.”

Instead, he pulled her back inside and bashed her eye with a tire iron, cracking her orbital socket and sending her to the hospital once again. After a year of abuse, Ambai, who is 23 years old, finally felt she had to go to a shelter.

Among lush and rolling mountains in the highlands of Papua New Guinea, women experience some of the highest rates of domestic violence in the world.

Ambai, who is being identified by a nickname out of concern for her safety, is one of the dozens of women waiting in a quiet and packed unmarked shelter on the edge of Goroka, a town in Eastern Highlands province.

“The police have offered to help make mediation between me and my husband,” Ambai said, nervous and unrested. “I want to get away, but there is no money.”

According to a United Nations report, more than two-thirds of all women in Papua New Guinea will suffer abuse at the hands of a partner. Another study found that about 60 percent of men surveyed in some parts of the country admitted to taking part in gang rape. Eastern Highlands province is one of the country’s most populous regions, and it is a hot spot for abuse: Nearly 80 percent of all women surveyed by the World Health Organization in the province said they had been beaten by their husbands.

“To beat a woman is to pick a mango from the tree,” said Sharon Sisopha, a counselor at the Goroka women’s shelter. “It costs nothing.”

President Xi Jinping of China and Vice President Mike Pence of the United States will be among those arriving for diplomatic meetings in the newly remodeled capital, packed with millions of dollars’ worth of new developments.

But away from the capital, violence against women is only getting worse. And the country’s health crisis — with outbreaks of polio and drug-resistant strains of tuberculosis, malaria and HIV — is only worsening in the absence of critical medicine and medical facilities.

Without even a single road to connect Port Moresby to the northern part of the country, the money and hopes in the capital seem a lifetime away.

“There are two Papua New Guineas: Port Moresby and the rest of us,” said Mary Kini, a human rights activist from the Eastern Highlands.

The laws against abuse are vague. Until recently, women in Papua New Guinea were treated as property. As soon as bride prices were settled, husbands could legally beat and rape their wives.

After years of outcry, the government passed a family protection law in 2013, essentially banning the abuse of wives and children. A police division devoted to combating family and sexual violence was established, and government-sponsored shelters were built all around the country.

But as soon as they were built, the money stopped. Rife corruption and mismanagement swallowed budgets, and most shelters outside the capital were left to fend for themselves.

“We rely on donations from foreign NGOs and charities,” said Sisopha at the Goroka women’s shelter. “When there’s none, women surely are being killed.”

When the police are called about domestic disputes, they often cannot afford the gasoline to drive there. Human rights defenders like Kini must gather donations and financing from nongovernmental organizations, like Oxfam, to help pay the police to rescue women from their abusive spouses.

“For every five women that come, we send five away,” said Judy Girua, a Goroka family violence police sergeant. Outside her office, in a tiny shack behind the main police station, 30 women waited on the dirt ground, hoping to make their cases. “Sometimes I don’t even have ink to print out the report.”

The island nation of Papua New Guinea is a fractured set of communities, clans, tribes and families living in an area about the size of California. Some 800 languages are spoken, the most in any single country. From one street to the next, there are entirely different and unique sets of unwritten rules. While abuse of women is almost universal in some parts of the country, other areas have matriarchal traditions, with land passed down from mother to daughter.

But since Papua New Guinea declared independence from Australia in 1975, women have generally been subordinate to men. No women sit in Parliament. Divorce laws are complicated and strict, most often forcing women to pay back their own bride prices. Ancient traditions are still an everyday part of life, and people across the country still believe in the practice of sorcery. In the highlands, stories of neighbors killing neighbors based on accusations of poisons and hexes are routine.

“Anything can lead to the accusation. A family member gets sick, a child dies in birth. People use it as an excuse,” said Kini, who spends much of her time helping to get people who have been falsely accused to safety. “Most of them are women and most of the time they are killed for nothing.”

On the outskirts of Goroka, hidden behind a vast homemade garden, Angela Kaupa has created a shelter of her own. For the past 11 years, she has opened up her small, three-bedroom farmhouse to women in need. With only a few sheets and dingy mattress pads, she calculates that more than 1,000 survivors have come to her over the years. “It’s better to be independent,” Kaupa said, cooking outside her small home, where she raises chickens and pigs.

With little assistance from government or nongovernmental programs, makeshift shelters like hers have become an important alternative to what she called “the broken government system.”

“People come and go as they please. Every day they arrive. I don’t ask for money or any of their stories,” Kaupa said. “You can see in their eyes when they’ve felt pain.”

The women she takes in are afraid of the formal shelters. Knowing the government will offer them little assistance, makeshift shelters offer a safer alternative, without the involvement of police reports and official filings that could easily stoke more violence.

A woman named Ambo has been at the shelter for eight years, longer than any other resident. Frail and quiet, she had been accused of being a witch in her home village. Ambo’s neighbors locked her in a house and spent weeks beating and raping her, Kaupa said.

When she eventually broke out, she could no longer speak and had been infected with HIV. Kaupa met her at a hospital and took her in.

Her latest resident is a first: A man convicted of beating his wife and raping a girl in his village. He served time in prison, and now Kaupa has taken him in, too.

“We have to find the good in every one,” she said. “Now maybe it’s time to try to change the men.”