In an interview, the marketing graduate from Clemson University talked about changes to the Miss American organization and how she feels about her new title.

I have wanted this for many years," said Matrazzo. "My favorite part of the competition is the women I stood next to on stage. There were 49 women who wanted this position and who were very qualified candidates, and to stand there and to be able to represent them now is amazing."

In reference to the changing organization, Matrazzo had a lot to say.

I wanted this to help bring what we know now as Miss America 2.0 into the media," she said. "I understand rebranding and feel that this was the right time for me to take the job of Miss North Carolina, to move us into a time where we are taking pageantry into scholarship, where we're taking it into providing opportunities for women based off of their intellectual abilities and less about what they look like."

On Sunday, Matrazzo said she supports the elimination of the swimsuit competition.

"I think we can recognize this as a scholarship organization," she said. "Last night I walked away with almost $25,000 in scholarship money. That can change a life. To equate scholarships with a swimsuit is no longer adding up, so it's time to move on." 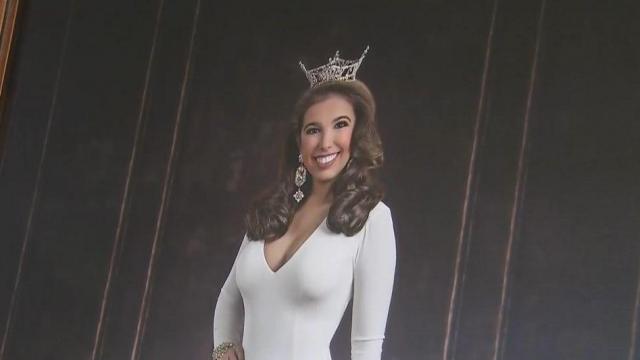 Matrazzo's statement differs from Victoria Huggins, who was selected as Miss North Carolina in 2017. Huggins has had a busy year filled with appearances.

"I think a vacation is in my future after 300 appearances," she said. "We have totally re-branded from a pageant to a competition."

In June, after the organization announced it will no longer have the swimsuit portion of the competition, Huggins said she was disappointed to hear it would be canceled.

"I was really sad because that was a fear I had to overcome," she said. "I did not know how I was going to compete in swimsuit because I always grew up so conservative, but this was part of the job requirement that I wanted, so I achieved that goal."

Despite the buzz over changes, Huggins said at the end of the day, that's not what the competition is about.

Huggins, who has won $30,000 in scholarships as she works to complete her Master's degree from Johns Hopkins University, said too many people forget Miss America is a scholarship organization.

"It really isn't about us, it's about what we can give," she said.