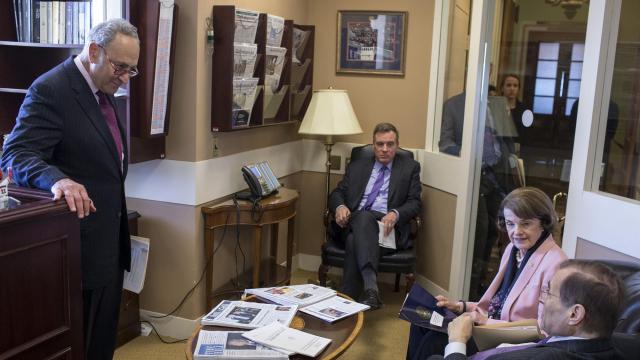 WASHINGTON — Rep. Jerrold Nadler, the outspoken New York liberal in line to lead the House Judiciary Committee, wants to have a conversation about impeaching the president of the United States — just not the one many Democrats want to hear.

“In my view, it’s premature,” Nadler said recently. “We don’t have a case.”

Even as special counsel Robert Mueller moves forward with his investigation of the Trump campaign’s ties to Russia, on Thursday winning a new guilty plea from President Donald Trump’s former lawyer, Michael Cohen, Nadler finds himself repeating that line a lot these days. He repeats it to Democratic colleagues giddy with newfound power, to television anchors thirsting for on-air reaction to Trump’s latest taunt and to his own Upper West Side constituents, some of the most liberal voters in the country who, like their congressman, view Trump as nothing short of an existential threat to American democracy.

The difference between them and him is that Nadler will soon have the power to decide whether and when to use the Constitution’s most extreme check on a president toiling under a cloud of investigations and accusations that he has abused the powers of his office.

“I will never say that you should never take political considerations into account,” Nadler, 71, said in an interview in his spacious Capitol Hill office. “But sometimes — not too often, but sometimes — something comes along that is so stark and so potentially disastrous that you have to try to just say never mind the politics, never mind what’s popular: What’s the right thing to do?”

That posture — facts first, repeated often and in excessive detail — is vintage Jerry, as Nadler is universally known, and allies believe it will help guide Democrats through one of the most fraught periods the capital has seen in decades. If Trump and his Republican allies are likely to try to overheat the system, Nadler’s instinct, they say, is to turn back the dial. The son of a Jewish chicken farmer, Nadler first began fretting about issues like due process at age 12 and entered politics in his early 20s. He is the kind of lawmaker seldom seen without fat folders of briefing materials in hand. His preferred style of discourse — why settle for a sound bite when a 30-minute discursive argument will do? — has not traditionally made for gripping TV. And he stays up until 3 a.m. reading in a rented motel room most nights he is in Washington, often to the point of daytime drowsiness.

Dick Morris, a Democrat turned Republican operative whose political career began as a strategist for Nadler’s successful student government run at Stuyvesant High School in New York, offered a backhanded compliment for Nadler’s reserve of patience and persistence: “If he were an Olympic champion, his event would have been treading water.”

“My God,” he added, “if there is anyone who has earned his political power right now, it is Jerry.”

Nadler has already begun drawing up ambitious plans for how to use that power — and for now the only “I” word they include is immigration. The Judiciary Committee has jurisdiction over several policy areas central to the Democrats’ legislative agenda, including immigration, and Nadler’s first-100-days sprint is likely to include action on several high-profile but long-stalled bills.

But the very first order of business, Nadler said, must be protecting Mueller and the investigation into Trump’s campaign and his actions in office. It is a goal shared by two fellow incoming chairmen, Rep. Adam Schiff, D-Calif., of the Intelligence Committee and Rep. Elijah Cummings, D-Md., of the Oversight Committee, whom Nadler is likely to work closely with to investigate the president and his administration.

In recent days, Nadler has sent letters to the Justice Department, the FBI and the Department of Homeland Security putting Trump-appointed officials on notice that come January, he expects prompt answers to the dozens of Democratic requests and other correspondence ignored when Republicans were in power. He plans to call Matthew Whitaker, the acting attorney general overseeing Mueller’s work, to be the committee’s first witness. And Judiciary Committee Democrats will quickly begin looking at Trump’s attacks on federal law enforcement agencies.

Nadler has said explicitly that he will wait for Mueller to finish his work before seriously considering a remedy like impeachment. But he has begun poring over texts on the subject. The best synthesis of what is an impeachable offense, Nadler likes to say, was written by a young lawyer working on the Watergate case by the name of Hillary Rodham.

“If I were Trump, Jerry Nadler as Judiciary chair is among his worst nightmares,” said Scott Stringer, the New York City comptroller and Nadler’s former chief of staff. “He does not play to the crowd.” Then there are matters of personal history.

Long before they ever thought of facing off in Washington, Nadler and Trump tangled for years over a proposal by Trump to redevelop a large swath of the Upper West Side. Beginning in the 1980s when he was still a member of the New York state Assembly and until the mid-1990s, after he had been elected to Congress, Nadler vocally opposed the project. At one point, he succeeded in stripping it of federal funds.

Trump ultimately built a scaled-back development, but his response was bitter. In a book published a few years later, Trump singled out Nadler as “one of the most egregious hacks in contemporary politics.” Nadler insists his opposition was never personal, but there is little doubt that Trump, a New York tabloid hound who makes almost any confrontation personal, will do his best to make it so again.

But Nadler’s views on impeachment were shaped in 1998 and 1999 by the proceedings against President Bill Clinton. As a backbencher on the Judiciary Committee, Nadler railed against the impeachment effort as a “partisan coup d'état.” He accused House Republicans of blurring the “distinction between sins and crimes,” and he warned starkly of “sexual McCarthyism.”

His defenses of Clinton endeared Nadler to liberals, but he says he took no pleasure in it then or now.

Nadler already appears to have all but given up on the idea that he would be able to convince Republicans of any presidential wrongdoing. The Judiciary Committee is one of the most partisan panels in Congress, stacked with lawmakers from the reddest or bluest districts in the country, and with the retirement or defeat of many Republican moderates in the House this year, the remaining minority is even more loyal to Trump.

Yet Nadler still insists that some of Trump’s supporters would have to be with him before he moved forward with impeachment.

Rep. Doug Collins, R-Ga., who was selected to become the committee’s ranking member, said he was prepared to work with Nadler legislatively but would do all he could to shut down the committee if Democrats overzealously pursued the president.

“If Jerry Nadler wants to step on that land mine, he is going to have to go his own way,” Collins said. Allies argue that Nadler is practiced at pushing against “groupthink,” or at least the thinking of his particular tribe, Manhattan liberals who overwhelmingly want him to impeach Trump. Though Nadler represented the site of the World Trade Center on Sept. 11, 2001, he broke with much of his state’s delegation and voted against the Patriot Act and against authorizing war in Iraq.

And in 2015, despite representing the most Jewish district in the country, he voted for President Barack Obama’s Iran nuclear deal, breaking with Sen. Chuck Schumer and other prominent New York-area Democrats — and infuriating many constituents and some Jewish groups.

“He is going to tell it like it is and you can go from there,” said Rep. Rosa DeLauro, D-Conn., who regularly hosts Nadler at her Washington home for off-the-record dinners. “Trust is very important to who Jerry Nadler is.”